101 Greenfield Road
Back to MapContribute

One of the earliest synagogues on Fieldgate Street was the Crawcour Shul, a 'landsmanschaft' of immigrants from Kraków, Galicia, then Austria (now Poland) that was formed in 1887. Their premises in an annexe at the back of a shophouse at what became No. 18 were bought by the Litvish Chevra Bnai Wilna in 1890, and immigrants from Vilnius, Lithuania, were invited to join. The synagogue later became the Chechanover Shul (from Ciechanow, Poland) and survived until the 1950s.1

Nathaniel and Ralph Davis (two of the seven Davis brothers) put up tenements with ground-floor and upper-storey tailoring workshops at 20–24 Fieldgate Street in 1895–9.2 By 1961, when it was set to be cleared, 22 Fieldgate Street had become a lodging house, disapprovingly described by Edith Ramsay as ‘nominally for coloured seamen… housing girls as well as men’.3

The County of London Plan of 1943 recommended the dispersal of industry away from London’s inner boroughs, but recognised that small factories and workshops, heretofore scattered hither and thither, could not realistically be banished, but would need in some degree to be kept close to the housing of those they employed, and gathered together in low-rent premises. A particular concentration was envisaged around Fieldgate Street, extending from the Whitechapel Road to Commercial Road between Adler Street and the New Road. In keeping with this plan, but much more modestly, the Stepney–Poplar Reconstruction Scheme of the late 1940s proposed an industrial enclave to either side of Plumber’s Row, a heavily bombed area that took in most of Greenfield Road up to Fieldgate Street. This clearance and redevelopment project swung into action in 1954, but compulsory purchase and other difficulties meant that Walter Bor, the planner–architect in charge of redevelopment in Stepney in the LCC Architects’ Department’s Town Planning Division, had to revisit plans for the Plumber’s Row area in 1959 to accept mixed use.4

Building works began in earnest in 1962 with infrastructural preparation that included the blocking up of Yalford Street. Little was achieved along Greenfield Road and Plumber’s Row before the 1970s. One of the first buildings to go up was 101 Greenfield Road, on the west corner of Fieldgate Street. This was built in 1963–5 to plans by De Groot Collis & Co., surveyors acting as architects. The first lessees were Lango Ltd, textile wholesalers and jersey- fabric makers, so the two-storey concrete-framed, brick-clad building became Lango House. Non-residential institutional use was permitted in 2010 and the premises are the East London Business Centre in 2018.5

Getting my first suit from Goldman's
Contributed by alan on June 19, 2017

I had my first suit made for me at bespoke tailor M. Goldman, 22 Fieldgate Street. It was quite a performance, measurements, then first and second fittings. The basters and finishers still sat on the tables to work. That would have been about 1948 I think. I still have the wooden suit hanger with its label. 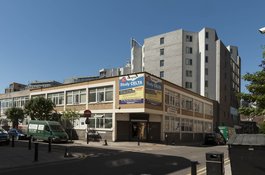