The building at the corner of Osborn Street and Wentworth Street replaced three eighteenth-century shophouses, erected by the Coopes and destroyed in the Blitz. It went up in 1965 as offices for Bandar Property Holdings Ltd, to designs by John D. Stevenson of Adie, Westendarp & Stevenson, architects, with Fairbairn and Courtney of Camberwell as builders. The reinforced-concrete frame was originally graced with straw-coloured Uxbridge flint apron panels beneath steel-frame windows. First occupants were Bennett Hill, shipping agents, with a travel agency on the ground floor. In 1984 the building was acquired by the Sonali Bank (UK), majority owned by the Bangladeshi government. A scheme of 1987 for a Postmodern two-tone granite replacement designed by Trehearne and Norman, architects, did not proceed. Instead, the bank acquired a floor of Universal House adjoining, and alterations in 1988 by the same architects included the formation of a banking hall and interconnection at third-floor level, the work by John Lelliott Construction. In 2005 Willingale Associates, architects, oversaw the application of brown tiles and off-white render concealing the flint panels. Despite periods of closure as a result of Financial Conduct Authority sanction for inattentiveness to money laundering, Sonali Bank UK continues in occupation.1 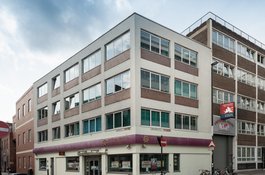