3 Osborn Street
Back to MapContribute

No. 3 Osborn Street is a substantial four-storey-over-basement building of about 1830 that began as the Russell Coffee House. Its site was part of Samuel Cranmer’s Swan Yard holding in the seventeenth century. By 1710 a house here was among several contiguous properties held by Joseph Bowler, an affluent cordwainer. His daughter, Sarah Eve, and her tallow-chandler husband, Thomas, may have lived in that house. Ownership passed to James Read, a distiller, and on to his son and grandson, William and John. The constitutional reformer William Hale Demeza was in occupation in the 1790s, followed up to 1813 by a greengrocer, then in the 1820s by a confectioner.1

A fire in 1827 started here, destroying the house as well as 74–76 Whitechapel High Street. After rebuilding, first use by 1833 was as the Russell Coffee House, with lodgings above. This was run by John Portridge, also a corn chandler, who swiftly went bankrupt; he was succeeded in 1834 by Richard Brooks (1790–1854). A room in the coffee house was used as the headquarters of the Whig abolitionist Dr Stephen Lushington in his campaign to be elected MP for the Tower Hamlets in 1839. Substantial rebuilding, perhaps involving refacing, took place after another fire in 1847. Brooks’ widow, Dinah Harrison (1804–85), ran the coffee house till 1862 when it was taken over by James Stent, who extended lodgings into No. 5 and small houses at 1–4 Bull Court to the rear. Stent still owned the premises at his death in 1914, though the running of the business had been subcontracted to Sidney Fuller by 1891. By 1915 No. 3 had become the estate office of Joseph Donn, a former draper with extensive properties throughout London, and a home at 25 Princelet Street. His son Albert Donn (1895–1968) continued here before the building slid into mixed residential and rag-trade use from the 1950s to the 1980s, above a betting shop in the 1960s.2 The upper floors were formally converted to be a four- bedroom flat in 1999. Since 2006 the shop has specialised in money transfer, principally to Bangladesh.3 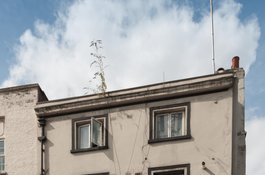