101 Whitechapel High Street
Back to Map

1960 office building and former bank, on site of Tewkesbury Buildings

This 1961 shop and office building, built by Wates Ltd to the designs of S.A. Burden, architect, for Midland Bank Ltd, is another war-clearance replacement, rather different in character from others on the High Street. Its outline is assertively modern, with reinforced-concrete side beams and floor plates set forward of exposed aggregate panels flanking wide shallow bow windows formed of delicate concrete mullions, more in the Festival of Britain style, with pinkish panels below the windows. The basement and ground floor are 100ft from front to rear, with strong room, WCs and staff room in the basement, and top- lit former banking hall and offices to the ground floor. Above the front portion were four more floors of offices, occupied by the bank as a computer centre in the 1970s.1 The offices have had a variety of uses since the bank vacated them around 1995 – law, business and language schools, student accommodation (‘young international sociable flatshares’), minicab offices; the ground floor has been a betting shop since the bank, by then HSBC, closed the branch c. 2003.2

Nos 97-100 were until the war similar shop houses, four storeys high, two windows wide, all rebuilt or substantially altered in the late 1840s; only No. 98, shorter and with a single window to the third floor, broke the uniformity. They had acquired some cement embellishments to the frontages, probably around 1860 when, perhaps, the excitement around the creation of Commercial Street saw much rebuilding and titivating of the High Street frontage.3

No 97 was described, in 1808 at the bankruptcy of its silk mercer occupant, Charles Newman, as having a double bow-front shop window, with two floors of living quarters above and attics. It had apparently been rebuilt, at four storeys, by 1836, and was successively occupied thereafter by a succession of cheesemongers from the 1820s to the 1860s, including Thomas Marshall who extended the building in 1849, followed briefly in 1863-7 by a branch of the East London Bank, then in the 1870s, till the First World War by John Sawyer, hair merchant, and finally by Charles Kleinsmann, ‘hairdressers’ sundriesman’, till the building’s destruction during the war.4. No. 98, like 97 hemmed in by Tewkesbury Buildings, was similarly occupied, by a hosier from the 1820s to the 1840s, and a tea dealer and grocer until Richard Spurgeon, an Ipswich draper, opened a shop there in 1868. Although this was not a large shop, Spurgeon’s was an early signal of the arrival of branches of multiples on the High Street, as he had thirteen branches in London by 1884, as well as a warehouse at Newington Causeway.5 Spurgeon was succeeded in the 1880s by a various drapers, including from the 1890s the Humphreys who stayed till c. 1938, succeeded in the business by J. Gold, till wartime destruction.6

Nos 99 and 100 were rebuilt by Symes along with Tewkesbury Buildings (see below), in 1847. The earlier building on the site of No. 99, on the east corner, was a pub, the Tewkesbury Church, by 1730, which continued till the 1770s, but in 1666 and 1674 the building on the site, with six hearths, had been occupied by Mathias Pratt, probably the stationer who died in 1686 and was buried at Whitechapel (as his will was witnessed by Theodosius Lanphere, the tinplate worker five doors away.7 In the1830s and 1840s No 99 housed George Ferguson, childbed linen warehouse, and, following the rebuilding in 1847, it was a bakers (Robinson then Richard Higdon, who let the long narrow warehouse to the rear to Gardner’s, the hay salesmen in Spread Eagle Yard from the 1870s) till 1893, when a severe fire killed the baker Joseph Hermann and four of his employees.8 Jewellers (Maizels followed by Steingold) subsequently occupied the building till its final destruction during the war.9 The occupant of the earlier building on the site of No 100 was a cheesemonger, Roger Redmain, in the 1730s and 40s, then in rag-trade use from the 1840s, during which time it also suffered a serious fire that affected 99 and 101.10 From the 1870s bootmakers took over, including, from the 1875 Asher Cruley (‘captains and shippers supplied’, previously at 102 which had been taken over by the ever-expanding Venables & Sons) and later his widow (who also had No 90), till 1908 when Morris Spector, confectioner, whose widow Rebecca remained till the war did for the premises. The repeated fires no doubt account for substantial repair work needed to both buildings in the twentieth century.11

The former No 101, which occupied only the west half of the present No. 101's site, was rebuilt in 1847 by Mead and Powell, manufacturing stationers, on a 90-year rebuilding lease from 1848, a sober four-storey brick shophouse with round-headed windows to first and paired similar to third floor, and a large top-lit warehouse stretching back between Venables’ premises in Commercial Street and the west side of Tewkesbury Buildings, on the site of the former bell foundry (see Nos 102-05). The old foundry on the north side of the High Street remained empty after the departure of Thomas Lester, who made the move to the Whitechapel Road site, until 1752. It was taken over, along with one of Bartlett’s other former properties, the house on the site of No. 101, by Thomas Deming, a cooper and commisioner of Paving for the High Street, who had cooperages in Bishopsgate and Alie Street by the time of his death in 1776.12 The site retained its quasi-industrial character, however, right up to the 1840s rebuilding of both the street-side shop-house, No 101, and the foundry site, which, after Deming, housed George Ilsley and later his son Jeremiah (1782-1854), coach-springmakers and tyresmiths.13 The shop-house was more genteelly occupied, by Thomas Spooner, later his son George, pastrycook and ‘ornamental confectioners’, from 1805 till Mead and Powell’s rebuilding in 1847.14

Nathaniel Powell, who rebuilt the site in 1847, had previously been at No. 93 High Street and was following his retirement Treasurer to the Salvation Army/East London Christian Mission’s People’s Market (qv) in the 1870s.15 The business offered stationery supply of a typical wholesale kind, of account books, and school and business supplies, they also offered writing and dressing cases, work boxes and ‘every variety of fancy stationery’.16 The firm became N.J. Powell in 1869, the business retaining the name when taken over in 1871 by the Quakers Compton and Henry Warner. The brothers had worked in their father’s brass-founding business in the Barbican, but appear not to have been involved after his death in 1869. Another brother, Metford, ran the wallpaper manufacturers Jeffrey & Co., lately removed from Kent and Essex Yard to Islington.17 After both Warners’ deaths in the mid-1890s, N.J. Powell & Co. went into liquidation in 1902 and was finally wound up in 1908.[_^_18] Thereafter A. Goldenfeld & Co. Ltd, warehousemen, who also had premises at 76 High Street, had No. 101 till it was destroyed in the war.19

Tewkesbury Buildings
Contributed by Survey of London on July 13, 2018

From the seventeenth century until the Second World War a long narrow courtyard was located off the northside of the High Street, with an entry thorugh an archway between Nos 99 and 100 Whitechapel High Street. It existed by 1675 when it was known as Church Alley, and by 1787 Tewkesbury Church Alley; there was a pub called the Tewkesbury Church adjoining the alley by 1730, source perhaps of the name upgrade.1 The alley’s trajectory over the next 250 years was the opposite to Spread Eagle Yard, in that it became narrower and more uniform. In the 1670s it had twenty-six houses, mostly of one hearth, a narrow alley with a subsidiary spur eastwards and a square court at the north end. The only occupant who can be identified is a cutler, Thomas Lenton (d. 1695).2

By 1823, Tewkesbury Place, on a single lease with No. 99, consisted of sixteen three-storey houses, a warehouse and stabling for No. 99, a state it remained in till rebuilding in two phases in 1847-50 as Tewkesbury Buildings, fourteen three-storey, flat-fronted houses and a warehouse built by Pollock & MacLennan of Osnaburgh Street and Adcock of Seymour Street.3 Nos 99-100 Whitechapel High Street had been partially rebuilt presumably in connection with this, in 1847.4 They were built for Dr Edmund S. Symes, a physician long resident in Grosvenor Street, Hanover Square, who seems to have occupied himself mostly with phrenology and in directorships of various insurance and loan companies.5 When Tewkesbury Buildings were rebuilt Symes was complimented by the Osborn Street Commissioners on the ‘excellent’ arrangement of the houses, but by 1862 the Whitechapel District Board found that although they ‘were of the very best class of poor houses in the district, they caused more trouble to enforce proper sanitary arrangements than any other houses’.6 Underground rooms were repeatedly found illegally occupied as sleeping apartments.

The previous year, the journalist John Hollingshead found: ‘Tewkesbury Buildings is a colony of Dutch Jews, and, if anything, they are a little cleaner than their Christian neighbours.7 A synagogue, Chevrat Ahavei Shalom [‘Lovers of Peace’] existed at 10 Tewkesbury Buildings from 1863 till, at least, 1894.8 In 1879 its Warden, Alexander Saloman Haring (1821-82), in whose home the synagogue was situated, appealed for funds to repair it.9 Haring, a bootmaker, had emigrated from Amsterdam in 1852 or 1853 and the Census supports the residence in Tewkesbury Buildings of numerous people of Dutch origin from 1851 onwards, many involved in cigar-making, including the Zeegen family who established a factory in Chicksand Street. In 1871 40 out of 54 heads of household in the Buildings were born in the Netherlands, mostly in Amsterdam; in 1881 it was 29 out of 43.10

The building had one basement, which was around 100 feet long, and the Branch occupied the basement and ground floor. The remaining floors were occupied by the Bank’s training facilities, with one floor being the home of the Bank’s Archivist.

The branch re-located to a site opposite the Whitechapel mosque around 1995.

A great area to work in, with many interesting characters locally - some who had been in the area all their lives.

Chuts in Whitechapel
Contributed by maurice on June 2, 2017

My forebears settled in Whitechapel in the 1850s, having migrated from Amsterdam. They were among a group of people known as Chuts, dubbed thus by their fellow Londoners, possibly in tribute to their overheard devotion to the Dutch word 'goed' (good) which is pronounced, roughly, 'choot' (the 'ch' pronounced as in the Scots). My family were recorded as living in various dwellings in Tewkesbury Buildings, and went on to establish Zeegen Brothers cigar factory in Chicksand Street.

I am researching my family history. Samuel Joseph Cohen and his wife Frances lived here with their family c. 1881. They would have been in the midst of Jack the Ripper's murders in 1888. The building was split up into dwellings numbered 1 to 15.  Samuel was a cigar-maker and his wife a fur sewer. They lived at 13 Tewkesbury Buildings. Prior to this, in 1871, Samuel lived at 8 Tewkesbury Buildings with his mother Sarah. 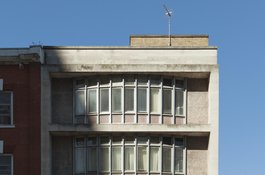