90 Whitechapel High Street
Back to MapContribute

1910-11 shop and offices, sometime site of Blooms restaurant, on site of entrance to Inkhorn Court

90 Whitechapel High Street and the site of Inkhorn Court
Contributed by Survey of London on July 11, 2018

A model of cut-price fin-de-siècle jauntiness, with scrolled broken pediment and dainty oriel, No. 90 is best remembered as Blooms restaurant, which was opened in 1952 by Solomon (Sidney) Bloom (1921-2003). The building was erected in 1910 by E. Laurance & Sons of Eagle Wharf Road to the designs of E. N. Clifton & Son for Edmund H. Hodgkinson, retired marine insurance broker and inventor.1 Until the advent of Blooms, the building was in typical High Street rag-trade use, with doctor’s and dentist’s surgeries in some of the upper parts.2 The restaurant’s name - M. Bloom (Kosher) & Son Ltd - honoured Sidney’s his father, Morris, who had run salt-beef shops and snack bars in Brick Lane before the war.3 To the end, Blooms retained much of the character of its 1950s refit. The front of the restaurant was a retail delicatessen with a counter to the left of the door, outside which a bagel- seller often sat. Reviewing it in 1995, not long before it closed, the writer Will Self described the ‘large, lozenge-shaped room … empty save for rank upon rank of snowily clothed tables. One side of the restaurant is dominated by a huge photo-mural of Petticoat Lane, shot from the air. The other side is entirely mirrored. So despite the lack of clientele, we still felt as if we were in a lively street scene’.4 Marcus Binney, visiting a few years earlier, found ‘the interior is Festival of Britain, down to the 'hairpin' pattern balustrades… The ceiling has the cove lighting of the jukebox age. It's not high style, far from it - just a time warp.. the colours are pure GWR – chocolate and cream’. 5

When Blooms closed in 1996 (a branch in Golders Green survives), salt beef and lokshen pudding gave way to burgers, as the restaurant reopened as a branch of Burger King. The upper floors, previously in office use, were converted to five self-contained flats c. 1998.6

The 1910 building replaced a substantial shop-house, perhaps anciently an inn, that gave access to an alley called Windmill or ‘Wine Mill’ Court by 1674, but soon renamed Inkhorn Court (see below).7 By the time of its rebuilding in 1910 it was a brick-built house, four windows wide, of late eighteenth- century/early nineteenth-century appearance. From the 1770s to the 1830s it was Mary Phipps & Sons, carpet warehouse.8 James Armstrong, ‘exhibitor of figures’ – a sort of low-rent Madame Tussaud’s, with wax figures - was there in 1851, followed, almost exclusively, till the rebuilding by a succession of shoemakers, on an increasingly industrial scale, the shop portion in use sometimes as a greengrocers.9

Inkhorn Court is first identifiable as ‘Wine Mill Alley’ in 1674, a corruption presumably of Windmill Alley, the name on seventeenth-century maps. Then it held eleven houses, mostly of three hearths, though with one of six, along its east side and narrow north end only.10 By the early eighteenth century it had become Inkhorn Court, sometimes ‘5 Inkhorn Court’ (It is not to be confused with Ink Horn Court, on the City side of Petticoat Lane). By 1803 there were ‘nine substantial brick-built houses of three stories’ in the court.11 John Hollingshead characterised it in 1861: ‘The lowest order of Irish, when they get an opportunity, will take a room and sub-let it to as many families as the floor will hold. Inkhorn Court is a fair sample of an Irish colony. The houses are three stories high and there is not a corner unoccupied’.12 Then the three two-storey double-fronted houses on the west side were newly built but, the court was not even 6ft wide and had already attracted the attention of the Whitechapel District Board, whose Medical Officer of Health, John Liddle, found that while the seven old houses on the east side (and one at the north end) each had a small yard with a privy, the new houses on the west side, as in Queen’s Place, built on the site of a warehouse and the penny theatre behind No. 91, were lit only from the court, and shared three ‘open and exposed privies’ at its south end.13 Twenty years later the whole court was in squalid condition: ‘At Nos 3, 4 , 5 and 6 Inkhorn Court, the yards are flooded with liquid filth. The public privies are stopped, and they are in a filthy condition.’ By the time the houses were demolished in 1881-2 for the Metropolitan Board of Works’ Flower and Dean Street (and Goulston Street) improvement there were 100 people living there.14. A successful appeal in 1886 by the MBW against the amount of compensation offered to the leaseholder for the demolished houses saw its solicitor highlight the conditions in Inkhorn Court: ‘It is impossible to speak too strongly of the disgraceful character of these premises, the approach from High Street, Whitechapel, being some 3ft wide, and the courts being of wholly insufficient width for sanitary requirements’, and that the leaseholder had had numerous Nuisance Removal notices served on him. Sir George’s Residence for Respectable Girls was built on the site the same year.15

Once in a while my mother picked up a roasted chicken from Blooms as a special treat for us. We would go there occasionally for a salt beef sandwich and ate at the bar. Mostly we went to Strongwaters, in Black Lion Yard, as it was a bit cheaper and closer to home. When my future husband and I started going out together (I was about 17 or 18, so about 1966/7), he would take me to Blooms and we sat in the restaurant like the rich grown ups, as it was quite posh. There was often line ups there. My husband had a cousin who worked at a little handbag shop next to Blooms. 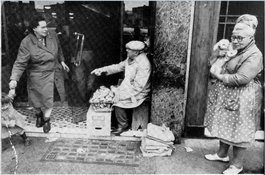 Snowy the dog outside Blooms, photographed by Ian Berry for 'This is Whitechapel 1972', copyright Ian Berry
Contributed by Rosemarie Wayland (nee Zetolofsky) 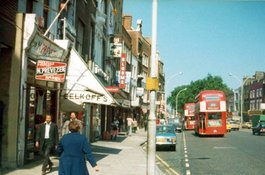 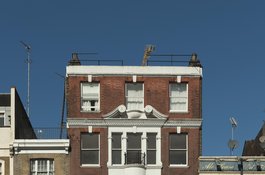