4 Gunthorpe Street
Back to MapContribute

This block of flats of 1886 on Gunthorpe Street’s west side was built as Sir George’s Residence for Respectable Girls, part of wider redevelopments enabled by the Goulston Street Improvement of 1877. The slums cleared here were Inkhorn Court, a dead-end alley behind 90 Whitechapel High Street, and 4–7 George Yard. The block was built as a home for working women by George Luke Hodgkinson (1849–1917), never knighted, let alone sainted, and Edmund Hugh Hodgkinson (1857–1943), wealthy marine insurance brokers, as a memorial to their ship-owning father, Sir George Edmund Hodgkinson (1817–86), whose will provided funds ‘to be applied for … religious or charitable objects’.1

This plain dignified building in keeping with the other dwelling-block improvements of the 1880s, of stock brick with red-brick bands and window heads. There is a date stone of 1886 in a small shaped parapet gable. The ground floor had two large dining rooms, four bedrooms and a scullery, with similar arrangements on the upper floors, the larger rooms divided into cubicles, much as later prevailed in Rowton Houses. The lodging charge was 3_s._6_d._a week which included breakfast, tea and supper. Uptake was initially slow – in June 1887 only eight of the sixty places were occupied. Not all the Hodgkinsons’ wealthy supporters were uncritical of the building’s appearance – Mary Jeune, later, as Lady St Helier, an LCC Alderman, thought that the ‘exterior should be more attractive, and especially the entrance – poor girls (are) easily led by appearances’. Henrietta Barnett felt that the girls should be ‘made as free and easy as possible’.2 By 1891 fifteen were resident, most in the rag trade or domestic service, with a couple of tea packers, presumably at Brooke Bond in Goulston Street. A decade later there were fifty women, more than half in the rag trades, the rest in other factory work (biscuits, whisky, cigarettes, confectionery, tea and stationery), with similar numbers and a slight shift from rag-trade to tea and clerical work in 1911. The name of the home, often simply Sir George’s Home, was in time corrupted to St George’s.3

In 1916 or 1917, perhaps on G. L. Hodgkinson’s death, the home ceased to be a women’s hostel and was divided into flats. Commercial activity crept in alongside residential – two of the flats were tailoring workshops in the 1950s and 1960s, and a cold store was installed on the ground floor connecting with the kitchens of Blooms at 90 Whitechapel High Street. In 1997–8 the building, by then used only as a kitchen, store and warehouse, was converted for London & Regional Residential Co. Ltd to the designs of Paul C. Tasou of Tasou Associates, architects, by Belgrave Construction Ltd to form eleven flats, adding a mansard attic and roof terraces.4

Describing the Residence for Respectable Girls
Contributed by Survey of London on April 17, 2018

"This was the Residence for Respectable Girls and respectable, this is one of those very loaded Victorian terms. It doesn't mean that they were sort of prim and proper, what it means is, basically, they weren't prostitutes. These were young women who maybe came to London for work or whatever and fell on hard times and had no repose, and so could be accommodated here. It's a kind of hostel. They offered accommodation but they also had people coming in who would actually give talks and so on to the women here. They will have a sort of programme of events I suppose we'd call it.

I suppose we're looking at young women, possibly 20’s, because you have to remember that in the 19th century, London was growing hugely. It was attracting a lot of immigrants from other parts of the country. People were leaving their country life or their provincial towns and coming to London because of the growth of industry on the back of the growth of the docks. A lot of people were coming to London and then finding it wasn't quite so easy to find the work, and that’s the way that people have come to London ever since, really.

They would find themselves, if they couldn't find work or indeed if they lost work because there was no sort of trade union setup as we understand it today, and so employment conditions could be difficult and you might end up losing your job and not being able to afford your rent. Again, rents were notoriously higher in private sector as it were.

[At this time in the East End we] have a large number of refugees and hostels for varieties of people from different social strata all the way from the people with absolutely nothing to people up to who are just in financial straits but are not as if were vagrants.

Again, like with rest of George Holland's work, there's very little information [about the building] available at the moment. I'm sure [it is] in archives somewhere that could be ferreted out and put back together.

They stopped operating here with the death of George Holland himself [in 1900]. It was very much a one-man mission.

It carried on for a while [as a hostel] but by the outbreak of the First World War in 1914, it was deteriorating into a slum. You got a lot of poor people living here. As with a lot of buildings in the area, with the poverty among the Jewish population particularly here, a lot of Jewish people were living here.

I imagine it probably was bought by someone or rather who then ran it as slum accommodation. It was cramming people in, really.

The mission died with George Holland himself." 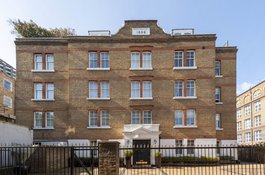