Former foundry to rear converted to be a synagogue in 1896, front range Federation of Synagogues offices of 1972-4, all converted in 1999

Greatorex Street is named after the Rev. Daniel Greatorex, the vicar of St Paul’s Dock Street in the late nineteenth century. Until 1936 it was Great Garden Street, taking its original name from being the way from Whitechapel Road to Leonard Gurle’s seventeenth-century nursery. Daniel Fenning (1714/15–1767), a grammarian and textbook writer, was resident in Whitechapel from the late 1740s, and lived at what later became 7–9 Great Garden Street from at least 1760 to his death.1 This was a big double-fronted five-bay house, possibly built for Fenning. Next door, No. 11 was a later and smaller Georgian building, of two bays and accommodating offices. To their rear a square-plan skylit foundry building was added around 1870, probably by Charles Stanley Osborne, a bellfounder who became a metal manufacturer.2

This property was taken in 1894 and the back ‘warehouse’ converted to be a synagogue, an unusually large one for the area at the time, the work complete by 1896 when the synagogue was consecrated. Lewis Solomon was the architect, I. Silverman the President. A timber building was added on the south side in 1896–7 and the Great Garden Street Synagogue became part of the Federation of Synagogues. Refurbishment took place in 1914 and further more extensive rebuilding in 1923-4 followed amalgamations with the Wellclose Square and Voice of Jacob and Good Heart synagogues. This was overseen by Frank J. Potter, architect, £1,000 of the overall cost of about £8,000 being raised through loans from members as the Federation refused a request for a second advance. The work included a new entrance at No. 7 immediately south of the large house, and it is to this phase that much of the interior that survived up to the 1990s can be ascribed. The space remained top-lit with a large lantern, and had galleries on three sides on iron columns. On the fourth side (to the west, which is liturgically surprising in such an important synagogue) there was a half-dome on columns over the Ark. The centrally placed Bimah was a gift of 1932. There was only minor war damage. Membership of what was one of the area’s principal synagogues is said to have peaked at around 1700 families.3

Deemed unsafe the houses at Nos 7–11 were demolished in 1971 to permit redevelopment in front of the synagogue. This was carried out in 1972–4 to plans by Preston Rubin Associates, architects (Theo Rubin, job architect). This gave the Federation of Synagogues a ‘Social Services Building’, in fact a headquarters, strikingly designed to emphasise the first floor which housed a court to the north, with adjuncts of a judge’s lounge, prayers’ robing room and rabbi’s room. The ground floor accommodated a burial department and, under a steeply raking roof over two upper storeys, there were administrative offices for the Federation and the London Talmud Torah Council. The building was not formally opened until 1979 when it was named Morris Lederman House in honour of the Federation’s long-standing President.4

Much of the congregation and the Federation’s offices moved away. The synagogue, used for worship for the last time in January 1997, saw transitional use for raves and art projects. The complex (including the adjacent building to the north) had been acquired by the Bethnal Green Business Development Centre Trust, with the help of a European Union grant as part of the Bethnal Green City Challenge, for a conversion to offices and studios that was carried out in 1999 by Ankur Architects. The synagogue was gutted, with windows inserted into its external walls, for use as a Business Development Centre. A high-level coloured-glass Star of David round window, which once lit the gallery, survives at the centre of the west wall. Foundation stones of 1896, 1914 and 1962 are retained in an internal courtyard.5

Remembering the synagogue
Contributed by patricia on July 5, 2017

I got married when I was 20, my husband was 22, at the Great Garden Street synagogue in 1969. Our family had been going there since before I was born. I remember going there for years on the holidays. It always smelled musty. My brother was barmitzvah'd there. They had a Sunday school in a room upstairs, which we went to as kids, and the way they got you to go was to give out chocolate bars. Otherwise the children weren't really interested. In the mid 1960s they built a couple of modern flats adjacent to the synagogue and my Aunt Bessie & Uncle Jack moved in there. They worked together in a little fur factory in Thrawl Street close to Brick Lane.

Great Garden Street Synagogue in the Nineties
Contributed by Ted on July 7, 2017

There was a lovely, small congregation here in the early nineties. I first went in 1990. I didn't live in the area till much later. I was a stranger from North London, and they made me very welcome. I was then around 30, and the youngest man there by about 20 years, and below the average age by a heck of a lot more.

It was already a sad but proud relic of a vibrant community. All the East End synagogues were in similar position and slowly amalgamating. Stepney had just closed and a couple of their old boys came. It still had its own rabbi then. Just. But the nearby lunch club was about to close, the last East End kosher food venue. There was a plaque up to the chap who had been synagogue president for about 30 years. It broke his heart to see the place decline. As I say, they were a proud lot, I was told the place was the cathedral of the East End synagogues.

There was a strong move of Jews to the suburbs to north west London and to Essex even from before the war. Those that remained by the nineties tended to be older, poorer and less likely to be family men. It is a lasting regret that I didn’t explore the area when I first came to London in 1984, I’m sure there would have been much more to it.

I grew up opposite the synagogue and flats during the 60s/70s...in Evelyn House (the other side of Old Montague Street)...predominantly a Jewish block at the time...always think of the caretaker of the synagogue, old Jock, when I see photos...he lived in the attached flats behind......He used to shoo away us local non-Jewish kids when we were snooping round the back door of the kitchen area...or near any entrances....

We were used to begging for lutkes (or luktas as we called them... fried potato snacks) from the kitchen at the back door of Bloom's kitchen...occasionally scoring half a dozen to share between us, other times chased away by the chef!

Back at the synagogue..old Jock was a good old stick, even though he kept us away from the enticing smells that wafted from the kitchen.....He was a good friend of my nan and always had a smile and a good word when I wasn't trespassing.

He used to have nieces that came on hols during the summer holiday that I always used to play with...so long ago now that I can't recall their names....

So even though I never saw the inside of Great Garden St (always be Greatorex St to me!) I have fond memories of some of its occupants....

Still have a Whitechapel Heart! 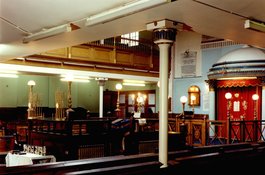 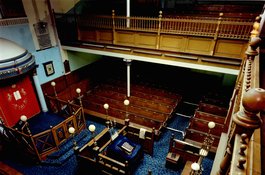 Great Garden Street Synagogue's interior in 1991, view from the gallery from the south-east
Contributed by Historic England 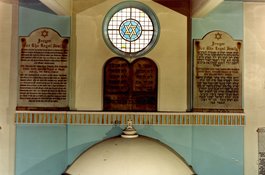 Great Garden Street Synagogue in 1991, tablets and window above the head of the Ark
Contributed by Historic England 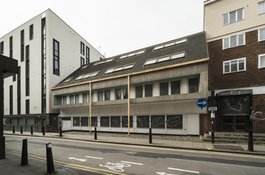 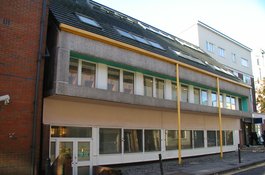 7-11 Greatorex Street in 2001
Contributed by Survey of London 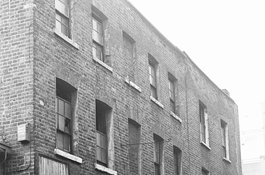