Return to Newnham Street
Contributed by Survey of London on Feb. 6, 2018

Yoel Sheridan grew up in Goodman's Fields in the 1930s and 40s and has written about the experiences of his family at this time in a book called 'From Here to Obscurity' (Tenterbooks, 2001).

"If one stopped almost any inhabitant of the East End of London and asked for directions on how to find Newnham Street, the chances are that the otherwise knowledgable person would be unlikely to have even heard of the street, let alone point in its direction. Yet, Newnham Street was a real street.

If however, when standing in Aldgate High Street, one asked for the Tenter Streets, then faces would light up. People would become knowledgable and ask, do you mean the Tenter Streets or the Tenter Grounds? This is because the former is to the south, close to the Minories, while the latter is to the north, close to Bell Lane. The former please, because there, in the centre of the North, East, South and West Tenter Streets, Newnham Street could be found. There, Shulem [father of Yoel or Yulus] lived until the German bombers in the second world war totally obliterated the Street from the map. Today, it is no longer a street and its name no longer appears on a modern map of London. In its stead, stands a Catholic School that occupies the whole of what was once the living accommodation of a thriving, industrious, diverse community. Yulus, as an adult, visited the school. One of the senior Nuns asked him whether he had lived in the area. No, said Yulus. No? said the Sister querulously, then what is your interest? I lived on here, said Yulus emphasizing the word on. He then pointed to the very spot where the house of his childhood once stood. It is a pity, said the Sister in her strong Irish accent, that the Jews left this area. They were so clean. It was a pleasure to hear her lyrical voice rising at the end of the last sentence.

The Jewish enclave of Goodman's Fields was socially similar to, if physically different from, other Jewish enclaves in the East End ghetto. The four to five storey tenement buildings in East Tenter Street and Buckle Street were not as high or as formidable as the seven storey Rothschild Buildings in Thrawl Street. Nor were they spread over such a large area as the Brunswick Buildings in Goulston Street and Hughes Mansions in Vallance Road, all to the north of Whitechapel. They did not have the enclosed courtyards of those other 'grander' buildings, which acted as playgrounds for children and meeting places for adults. The surrounding streets were the playgrounds and meeting places. Important facilities that existed in the enclave were utilised by the whole East End community, such as the Workers' Circle building in Alie Street that was both a political and cultural centre. Monickedam's wedding reception hall was also in that street. Camperdown House that housed the headquarters of the Jewish Lads Brigade and the Hutchinson House Youth Club, was located in Half Moon Passage. Leman Street boasted the headquarters of the Cooperative Wholesale Society (CWS), the central Police Station for the area, and, at one time, the Temporary Jewish Refugee Centre that later moved to Mansell Street with a back entrance in West Tenter Street.

[The Newnham Street] house was so much better than the previous overcrowded two room apartment that [Yulus's father, Shulem] had rented in the tenement buildings in Bacon Street, off Brick Lane, where toilet facilitites had to be shared with six other families living on the same floor. Now that he was living in a six roomed house with its own private toilet, he could not imagine how they [a family of nine] managed to live in those terribly cramped conditions...When number ten [Yulus] was due to come on the scene...a move to better housing conditions became inevitable. Now, at least, in Newnham Street, the family could breathe and the girls had the privacy of their own room.

Times had since become harder and [Yulus's father] had agreed with Rivka [his wife] to take in a lodger. They had moved their bedroom downstairs to the back room that had a window that looked out onto the back yard. The room was divided from the front parlour by large wooden double doors that were usually kept closed, as the back room also housed a foot treadle operated Singer's sewing machine...The upper back bedroom was to be converted to accommodate the lodger...The only toilet in the house was situated in the back yard, in a small outhouse. Access to the yard was through a door in the scullery that adjoined the kitchen. Access to the scullery was through the kitchen which was also the main living room where the family would congregate for meals, listen to the newly acquired wireless set, meet, discuss, quarrel, reconcile, laugh and, in the summer months, count the number of flies that had come to a sticky end on the fly paper hanging from the central light fitting...

One of the reasons for furnishing the front parlour so nicely when they came to Newnham Street, was so that suitors for the two girls could be received in style. They could then tell their parents how well they had been treated. Likewise, the eldest son could entertain his potential bride and Rivka and Shulem could entertain the potential in-laws with pride. the front parlour had not been used too many times for these purposes. But Rivka continued to hope.

[On Friday afternoons] Newnham Street was busy preparing for Shabbas. Rivka was not alone in whitening the square area outside the front door. All the pavements had been washed and the white squares outside each household looked like a bouquet waiting to be presented to the Shabbas bride. People were hurrying home in their work clothes. Food had to be prepared before Shabbas as no active cooking could be done on that day...The most popular and traditional recipe was cholent...The larger pots belonging to the larger families were too big to go into the family ovens [on Friday night] and so an arrangement was made with the local Jewish baker for the cholent to be cooked overnight in his oven...On Friday afternoons Yulus and his elder brother would take the family cholent in its two-handled brown enamel pot to the bakers located in St Mark Street next to the Scarborough Arms Pub on the corner of Scarborough Street. Other youngsters from other families would do likewise. The baker would place an identifying mark on the pot with chalk and place it deep into his oven with a long loaf paddle which he also used to remove the pot the following noon when the two boys came to collect it and carry it back home using rags to wrap around the handles for insulation against the heat." 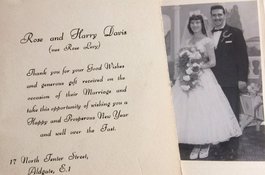 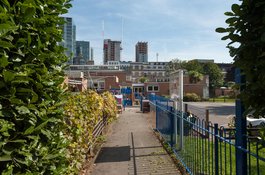 Entrance to school, looking towards the west
Contributed by Derek Kendall 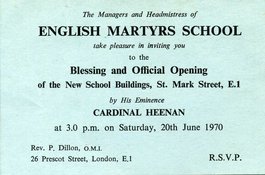 Invitation to the opening of English Martyrs' School, 1970
Contributed by danny 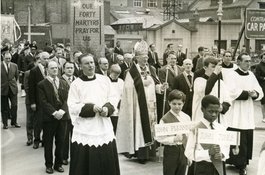 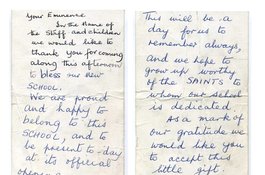 The speech by Danny McLaughlin, a pupil, to the Cardinal
Contributed by danny