2004–5, seven-storey block of offices, flats and unlet shops on the site of the Whitechapel Charities' Commercial School

A tender for the construction of schools in Leman Street mentions that the architect was Mr Beck.[1] This might be William Beck (1823-1907), a Quaker historian and architect, of London. In the 1860s and 1870s, Beck was in partnership with William Ward Lee (as Beck & Lee). He was surveyor to Six Weeks Meeting by 1862 and until c.1874, when he was succeeded by Lee who continued his practice. Beck retired in 1876 and resigned his RIBA membership in 1877. Beck & Lee designed hospitals in London and Saffron Walden, Quaker meeting houses, the Quaker Bedford Institute, new buildings and alterations for the British and Foreign School Society, and housing for the Metropolitan Association for Improving the Dwellings of the Industrious Classes, and the Improved Industrious Dwellings Company.

The formation of the Charity Commissioners in 1853 led to the amalgamation of Whitechapel’s parish charities and the building of the endowed Whitechapel Charities’ Commercial School, a project championed by the Rev. William Weldon Champneys, the pragmatically reforming Rector of St Mary Matfelon. Constructed in 1856–7, this parochial school, aimed at the sons of tradesmen, was designed by a Mr Beck, probably William Beck (1823–1907), a Quaker architect. The proud five-bay palazzo front to Leman Street reflected the school’s ambitions. Raised ground-floor and upper-storey schoolrooms were set above a granite plinth perforated to light a basement playground. Steps led up to entrances on Buckle Street.

The school opened in 1858 and its ‘commercial education’ soon gained high regard. In 1861 it was said to be full with around 200 boys and scholarships were strongly contested. By 1879 a large proportion of the pupils were Jewish, and therefore exempt from New Testament exams.1

A merger in 1888 of Whitechapel’s parish schools (the others being the Davenant School on Whitechapel Road and St Mary’s School on St Mary Street) as the Whitechapel Foundation caused the Leman Street building to be renamed the Whitechapel Foundation Commercial School and to be adapted to be one of two elementary schools serving a larger number of pupils as, confusingly, one of the Davenant schools. But in an era with much wider educational provision and a locality that was increasingly Jewish, this arrangement did not last. The school closed in 1897, its pupils transferred to Whitechapel Road.2

The building was thereafter converted to be the London Provident Dispensary, founded by Herman Landau. He employed Yiddish-speaking doctors, hoping to bring not only medical relief to the Jewish poor, but also knowledge of hygiene and sanitation. He was, however, dissuaded from making the institution wholly free to patients on account of fears of the pauperising effect it might have on people served well by numerous local charities. The Young Zion Institute made use of the building for lectures around 1902, and the East London Progressive Club met here in 1911. A branch of the International Bank of London had been set up on the premises by 1903 to serve as a ‘model emigration bank’ to serve the many Jews still arriving in Whitechapel from abroad. By 1932, the former school building was occupied by the Seamen’s National Insurance Society. After the Second World War, it became a rag-trade factory and warehouse. It was demolished around 2003.3

This building was erected in 2004–5 to designs by Osel Architecture Ltd for Stronglink Ltd. The seven-storey block of offices and apartments, faced with Portland stone and brick, replaced the former parish school and houses behind at 24–26 Buckle Street. Its ground-floor retail units have remained unlet.1

My favourite aunt
Contributed by Deekay on April 28, 2018

My great aunt, Doris Allan, was the second youngest from a dockworker's family from Canning Town. I don't know where she learned her trade as an embroiderer but she somehow worked her way up to owning her own business. She used to take me with her to her workshop in Whitechapel. The first place was demolished as it was very old and dilapidated but full of character and charm. She was on the first floor and on the ground floor they made bags. I think they were Italian? I remember the distinct smell of machine oil and cottons. After it was pulled down, she moved to Alie Street and continued to work as an embroiderer in to her 70s. Whitechapel was a part of my aunt's life as long as I knew her and probably many years before. She moved out to Essex in the 1950s but still commuted in every day - she must have had a real fondness for the place. 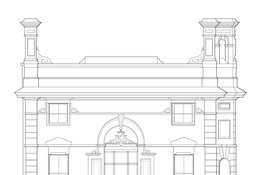