63 Mansell Street
Back to MapContribute

House of a Thousand Destinies
Contributed by Survey of London on May 6, 2020

Extract from Stefan Zweig's reflections on the Jews' Temporary Shelter in 1935:

"Every morning the newspaper shrieks at us of war and murder and crime, and the frenzy of politics fills our minds. But we rarely hear of the good that is done unobtrusively. Yet this is what we most need in a time like ours, for each moral achievement by its example arouses valuable forces within us, and everyman is made better when he honestly knows how to admire the good.

... And so I went to see the Shelter. It is situated in the East End, in an unpretentious street, but need has always found the way to its gates. Arranged on utilitarian lines, without any attempt at luxury, but singularly clean, it awaits with ever-open door the wanderer, the emigrant, who comes here to seek rest and respite. There is a bed prepared for him, a table laid for him, and more. Here he can have counsel and assistance in the midst of a strange world. ... In the midst of the vast and dread uncertainty that now hangs like a chill cloud of fog over the lives of thousands, he feels for a few days the warmth and the light of human kindness, and - real solace in his inconsolability - he sees, he feels that he is not alone and lost in a foriegn land, but that he is bound to the community of his people and to the higher community of mankind. ...

Thousands upon thousands of people have, in the fifty years since it was founded, rested and gathered new strength in this Shelter, and have gone gratefully further on their way. No writer or poet could have adequate command of words to describe the variety, the poignant tragedy of these thousands of destinies. For no matter where a new wave of calamity arises in the world, in Germany, Poland or in Spain, it sweeps broken, shattered lives against this one House (unknown to the fortunate, the rich, the untroubled) that has till now gloriously withstood every assault, and whose guardians, with admirable devotion have gladly done their helpful duty...Wonderful, therefore, this House that saves and serves the exiles and the homeless! Gratitude to all who have created and maintained it, this unknown and incomparable monument of Jewish and human solidarity!"

Four widely spaced bays in width, the early house on the site of No. 63 appears to have been slightly narrower than its late seventeenth-century neighbours north and south. Typically, it was set back behind a gated forecourt with heavy bollards, but unlike those of its neighbours, this area was not built over in the nineteenth century. First-floor windows had been cut down and given iron balconies and a parapet rose above a string course in front of attics. The first resident was probably Samuel Groome (1653–97), the son of a Quaker merchant who had plantations in Maryland and imported tobacco. Other early residents were Captain James Kettle (d. 1745) and Captain John Nickleson (or Nicholson), a merchant in the Carolina trade and one of Trinity House’s Elder Brethren. Aaron Jefuran and Son, Jewish merchants, were here in the 1770s and from the 1790s until the 1830s the house was associated with two generations of the Nathan family, quill and feather merchants. In 1818, an unusual insurance notation recorded a ‘room adjoining called The Tabernacle’. This may refer to a space for a private minyan (Jewish prayer group).1 In 1832 David Scott, a merchant selling ale from Leith, sold the lease of No. 63. By this time there was a coach-house and stable to the rear. For much of the rest of the century Andrew Loveys, a cooper, wine and bottle merchant, occupied the property using the house as offices and a family home while maintaining a two-storey workshop to the rear.2 The house was demolished in 1924. Some of its panelling and enriched cornicing were salvaged for the Geffrye Museum where until 2006 they were displayed as parts of a room deemed typical of the 1740s.3

The site was redeveloped in 1929–30 with the present building. This was erected as a hostel for the Jews’ Temporary Shelter, moving across from Leman Street. Designs were by Lewis Solomon and Son, which at this date would have been Digby Lewis Solomon, and Bovis Ltd were the builders. The solid neo- Georgian façade conceals a steel-framed building that extends back as 23 West Tenter Street. Long and deep, it had densely packed thirty-bed dormitories to accommodate 130 men and women. There were also substantial dining, recreation and reading rooms. On the top floor an isolation department accommodated those arriving with serious illnesses. The premises were intended to embody a shift in attitudes away from the preceding Shelter’s enforcement of scrupulous utility to deter long-staying. The Matron recalled, ‘we were determined to humanise the conditions’.4

Celebrating its fiftieth anniversary in 1937, the Shelter claimed to have aided nearly 1,200,000 people since its establishment and to have accommodated over 100,000.5  Stefan Zweig visited and reflected:

‘No writer or poet could have adequate command of words to describe the variety, the poignant tragedy of these thousands of destinies. For no matter where a new wave of calamity arises in the world, in Germany, Poland or in Spain, it sweeps broken, shattered lives against this one House (unknown to the fortunate, the rich, the untroubled) that has till now gloriously withstood every assault, and whose guardians, with admirable devotion have gladly done their helpful duty.’6

The Second World War brought the work of the Shelter to a virtual standstill as immigrants were interned as enemy aliens, and travellers slowed to a trickle. Local residents displaced by the Blitz were rehoused in the Shelter, and from 1943 the building was requisitioned by the US military. In the immediate post-war years the Shelter welcomed children liberated from concentration camps, but thereafter the scale of its work was greatly diminished. By the mid-1960s, the dormitories had been reduced in size and other Jewish causes were being accommodated. While the Shelter continued to accept a small number of Jewish refugees from around the world, other uses were sought, including the transitional housing of the elderly awaiting places in care homes. The Shelter sold up in 1973 and moved to a thirty-five bed house in Kilburn, which closed as a hostel in the 1990s, but from where the institution continues to provide social support and accommodation to vulnerable Jews.7

The building at 63 Mansell Street was taken in the 1980s as premises for J. H. Minet Agencies Ltd, part of an insurance group with strengthening tentacles in Goodman’s Fields – it had redeveloped sites on Prescot Street and Leman Street (see p.xx). In 2009, the building became the London base of a scoliosis clinic that provides specialist therapy for young female patients, many of whom live on site having travelled from overseas.8 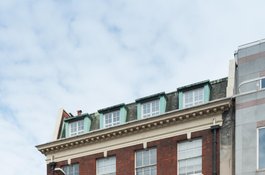 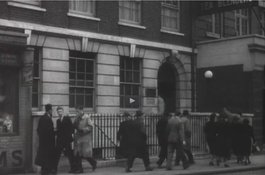