The Oliver Conquest, 70 Leman Street
Back to Map

Public house established 1830 as the Garrick Tavern in a former mansion with the Garrick Theatre added to the rear, all rebuilt 1852–6

The Oliver Conquest, formerly the Garrick Tavern and Theatre, 70 Leman Street
Contributed by Survey of London on May 7, 2020

This was the main part of the site of the house of Samuel Hawkins senior (d. 1771), the builder responsible for much development in Goodman’s Fields in the first half of the eighteenth century, combined with a neighbouring property to the north (No. 68) in the 1750s to make an even more substantial dwelling. It was to start with a broad three-storey mansion to which a kitchen adjoined, as also a warehouse and counting house (possibly at No. 68), with a coach-house and stables to the rear. Hawkins’s leasehold interest passed via his widow, Ann, to his son Samuel Hawkins junior (d. 1805), a silk throwster. After his death, the property was put up for sale.1

It reappears in 1831 as the Garrick Tavern, evidently a conversion, carried out with the consruction to the rear of the Garrick Theatre which opened on 27 December 1830. The name arose from proximity to the defunct Goodman’s Fields Theatre on Alie Street, where David Garrick first performed in London. The tavern’s first licensees were John Norris, formerly of the Lambeth Street police office, and Edward Higley, a partnership rapidly dissolved. The theatre replaced a building on East Tenter Street that had perhaps been used by John Hubbard, a Russia merchant, in connection with cotton-factory interests. A single wide passage within the south side of the former house, possibly replacing a carriageway, led all classes of theatre-goers in from Leman Street.2

The theatre claimed a capacity of 1,600 to 2,000 in a pit, a gallery, and one tier of uncomfortable boxes. On its opening it was deemed ‘a commodious little theatre’ the entertainments of which combined ‘the attractions of noise, number, and variety, so acceptable to visitors more numerous than select.’3 It had been built as a speculation by Benjamin Oliver ‘Conquest’ and Francis Wyman, who was soon replaced by William Gomersall. Conquest, who also ran the tavern from 1833, was a comedian-actor of moderate fame whose wife, Clarissa Ann, was a well-known dancer. In 1837, in their living quarters above the tavern, she gave birth to their son, George Conquest, who was to be described as ‘the most theatrical person in the theatrical profession’.4 Gomersall, also an actor, frequently played Napoleon on stage. Indeed, it was after a performance of _The Battle of Waterloo_involving faux-cannon in November 1846 that the Garrick Theatre burnt down.5

Rebuilding for Laurence Levy (d. 1873) began in 1852 and the theatre reopened in 1854; reconstruction of the tavern appears to have followed on in 1854–6. The architect was Joseph Lavender, whose scheme, accommodating just 480, was comparatively fire-resistant through masonry construction – a brick proscenium wall carried across the whole building, the stage being situated to the rear or west. The balcony, gallery and four private boxes were carried on iron columns. The principal entrance remained on Leman Street, on the tavern’s south side, but a stage door and balcony entrance opened onto East Tenter Street.6 One reviewer received the new venue as ‘a snug, compact theatre, pleasantly fitted up, warm, well-lighted, and exceedingly comfortable’. Even so, the wide stage, also 34ft deep, rendered the theatre ‘available for horsemanship’.7 Despite the popular appeal of its pantomimes and variety shows, the Garrick Theatre struggled and in 1861 was put up for auction with the tavern in a ‘dangerous state’. In 1868, newly decorated and up for sale again, it was said to hold 1,700 persons, with potential to pack in 3,000, and to be ‘used as a Circus’.8 In the early 1870s, the Garrick, ‘the last of the London Gaffs proper’, was held to be in decline – its entertainments and audience were disdained, its building sunk into ‘ruin and dull shabbiness’.9  The actor J. B. Howe became the sole lessee and manager in 1873, undertaking redecoration to attract a more refined clientele and intending to rename the theatre The Albert, a plan thwarted by the Lord Chamberlain. A brief spell as J. B. Howe’s ‘Theatre’ followed, but Howe was bankrupt by 1875. Under May Bulmer the theatre re-opened in 1879 after a further overhaul, including the insertion of stalls, aiming to entertain audiences with the ‘higher interests of dramatic art’ through operettas and ballets. Bulmer was unsuccessful as was her successor, John Baum. The pretensions of these owners were undermined in press reports that highlighted more melodramatic and popular shows. George Sims later recalled that ‘there were two or three big burly fellows in uniform who kept order by hitting the disturbers of the peace on the head with a cane’.10 In 1882 more building work was deemed necessary with adaptations for Messrs Wests and Peggs made to designs by James Edmeston, but the theatre struggled with another period of closure thereafter. A final revision of the interior was made in 1884 to meet the Metropolitan Board of Work’s newly stringent requirements. The last production appears to have been Pink Dominoes, performed by Charles Wyndham’s company. The Garrick had been a local theatre throughout, sympathetic to Jewish interests from its earliest years, producing a new play The Triumph of the Jewish Queen in 1835, and putting on Yiddish dramas performed by Russian actors in the 1880s.11

The Garrick Theatre was demolished in 1890 to permit the enlargement of Leman Street’s police station (see below). The tavern was internally reconstructed by George Lusk in 1890–1 with a first-floor concert room, bagatelle room and saloon, the establishment being restyled as the Garrick Hall of Varieties. The wide ground-floor passage to the south that had led to the theatre was reconfigured with a staircase for access to the small first-floor music hall, which had a capacity of seventy. The upper storey was residential. The Leman Street elevation accommodated no fewer than five entrances to private bars around the main central servery, a bar parlour to the north and a further snug to the rear.12 Around 1901, the tavern was managed by Eugene Wherley, a German-born local councillor, and commended for its well-appointed and spacious luncheon room, presumably the former concert room. Further reconstruction was undertaken in 1918 by Truman, Hanbury and Buxton, lessees since 1896. By the end of the twentieth century, the Garrick Tavern had been re-named Mr Pickwick’s; it became the Oliver Conquest in 2010. A wide barrel- vault in the south-west corner of the cellar appears to survive from the first Garrick Theatre of 1830.13

Some notes on the Oliver Conquest
Contributed by stephen.r.harris on Jan. 10, 2017

This pub was established as the Garrick Tavern, most likely in 1831 at the same time as the Garrick Theatre, of which it was essentially a part.  The first known licensees were John Norris and Edward Higley, the dissolution of whose partnership was announced in the London Gazette of 30 August 1831.

In 1891 Leman Street Police Station was built on the site of the former theatre, but the Garrick Tavern survived next door.  Also in 1891, the pub was leased by West & Co., brewers of Hackney Road.  The ownership later passed to Truman's of Brick Lane.

By the early 1980s the pub had been relaunched as Mr Pickwick's, with a Dickensian theme to the décor.  In the 1990s and 2000s, by now Grade II- listed, the pub changed hands at least twice.  It first passed from Grand Met to the Thorley Taverns pub chain around 1997 and was later owned by the Enterprise pub chain, before the licence was revoked by the London Borough of Tower Hamlets in 2010 and the pub closed.

But there was life in the old pub yet and it re-opened in October 2010, refurbished and now under the name Oliver Conquest in honour of its most famous former landlord. 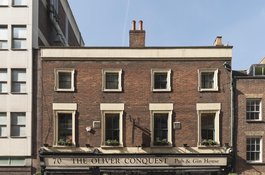 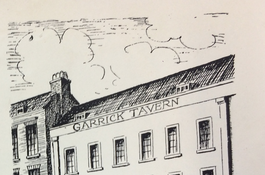 The Garrick Tavern, undated sketch
Contributed by Survey of London 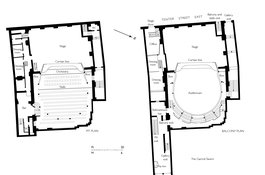