1854 as the Blue Anchor Public House

The Blue Anchor public house
Contributed by Survey of London on Dec. 12, 2016

There has been a pub here since at least the eighteenth century, probably earlier. Until the late 1760s it was known as the David and Harp. An alley on the site of No. 131, present since at least the 1650s, was called King David’s Alley or David and Harp Alley. In 1770 Edward Rayner appears to have been the first proprietor to have called the establishment the Blue Anchor (Whitechapel’s earlier Blue Anchor was on what is now Royal Mint Street). Destroyed by fire on Christmas Day in 1853, the Blue Anchor was rebuilt for George Church in 1854 by William Mundy & Son, builders. Church obtained a music licence in 1856. His building still stands, its four-storey stuccoed Italianate front packed with arched openings. The ground-floor front and interior, where match-board dados and a yellowed ornamental ceiling survive, were recast for Charringtons in 1928 by when the pub was known as the Old Blue Anchor. From 2000 to 2019 it continued as Bar Indo, a free house, with the old Blue Anchor sign in store. A timber cottage to the west, beyond a narrow throughway to a yard that was a remnant of the alley, was replaced in 1855 with a narrow shophouse, Hall & Son as its builders. This echoed the pub in its façade and blocked the passage. It survives in mutilated form as No. 131.1 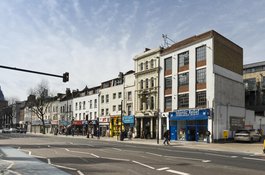 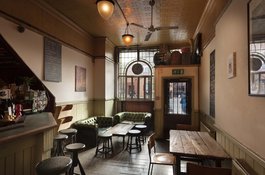 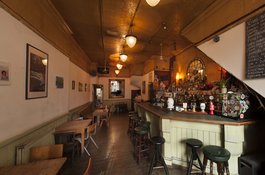 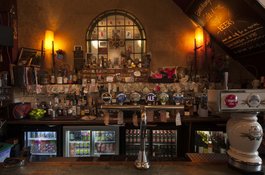 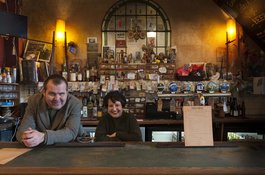 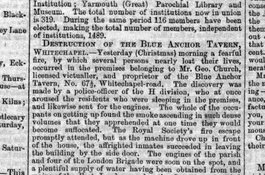 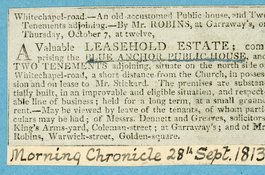 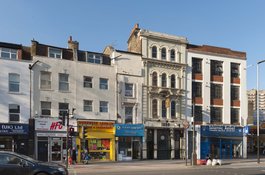 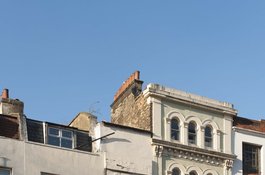