The White Hart, 89 Whitechapel High Street
Contributed by Survey of London on July 11, 2018

The White Hart is the only long-standing pub left on the north side of the High Street. It claims on its front signage to have been founded in 1721, a date of uncertain provenance, but it was certainly known by 1723, when the Custom House men confiscated sixteen bushels of coffee ‘concealed in a Load of Faggots’ at the White Hart Inn.1 It was likely rebuilt in 1774 when a 61-year lease was granted.2 It was known as the Grapes in the early 1830s but had reverted to the White Hart by 1839, when it was described as ‘recently repaired, the front is modern glazed with plate glass’; the frontage’s appearance, with giant-order Corinthian pilasters (the capitals destroyed since 2006), probably dates from this work following the expiry of the old lease in 1835.3 A stint with a music licence in the 1880s was brief, presumably because of the pub’s diminutive size, and perhaps also its structural condition: alterations were made in 1894 by Hood, builders, of Bethnal Green Road, apparently the reduction of the rear portion from three storeys to one. This was a sign, perhaps, of incipient instability as the internal floors also had to be reconstructed in the 1930s, by which time it was a Taylor, Walker pub, with public bar to the front and saloon bar to the rear.4. Its Brewers’ Tudor interior today, with dark-stained three-quarter- height panelling around the walls, and the suburban-deco leaded-glass roof- light to the rear bar, probably date from these reconstructions of the 1920s and 1930s. The tiny yard to the rear in Gunthorpe Street was covered in with a plastic roof and designated for smokers in 2013.5 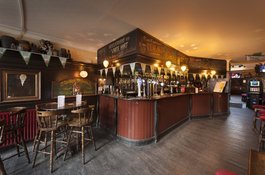 The front bar at the White Hart, Feb 2018
Contributed by Derek Kendall 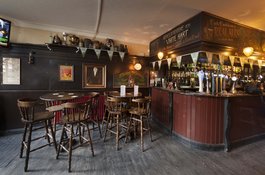 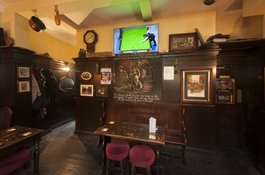 At the back of the White Hart
Contributed by Derek Kendall 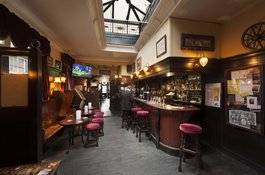 The rear bar at the White Hart, Feb 2018
Contributed by Derek Kendall 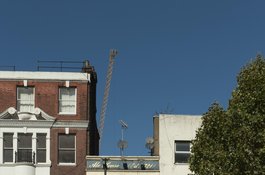 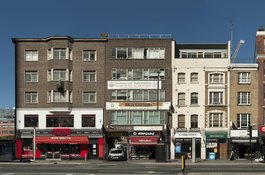 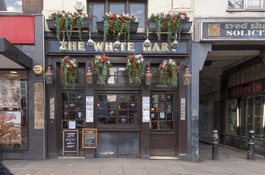 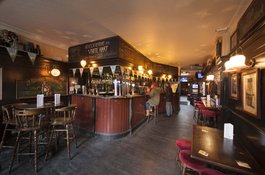