The Blind Beggar public house
Back to Map

The name of this pub is a reference to the Blind Beggar of Bethnal Green, in which parish it stands. A Tudor ballad about Henry de Montfort, who died in the Battle of Evesham in 1265, imagined that he survived blinded to be rescued by a woman from Bethnal Green, where he ended his days begging. The parish once hosted other pubs of the same name. This establishment’s origins seem to be late seventeenth century, possibly to do with a long manorial lease of 1673. The public house was held by John Bird in 1730 and then by Charles Bartholomew, with Richard Ivory resident by 1786 and up to 1807 when it appears to have been rebuilt by James Green, surveyor, and William Green, builder, both of Brick Lane, to whom the manorial leases were granted with four acres of land. The building had or thereafter acquired a grand hexastyle Corinthian front.1

In 1866 the Blind Beggar was purchased by Mann, Crossman & Paulin, at the Albion Brewery adjoining, and in 1894 it was rebuilt to designs by Robert Spence, that company’s engineer and architect. Polished pink granite pilasters and a central column support a double arch below the eccentrically trimmed red-brick upper storeys. Inside, the blood-red ceilinged interior has been much remodelled. Latter-day notoriety turns around the Blind Beggar being the site of the shooting of Georgie Cornell by Ronnie Kray in 1966.2

If you look at older pictures of this pub, there are large plant pots on ledge above pub sign.  These were removed by my father, Jack Holt, in the late 1960s or 70s, given to him by the landlord. He used them as flower pots and was proud of the history of them. You can see a picture of the pots in this newspaper article about the Krays, if you scroll down the page: http://www.mirror.co.uk/news/real-life-stories/i-interviewed-krays-here- blood-6405389 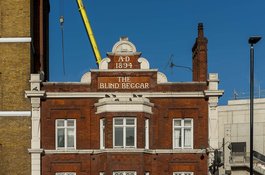 The Blind Beggar in 2018
Contributed by Derek Kendall 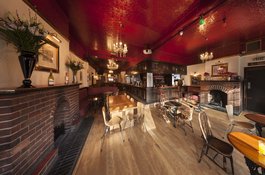 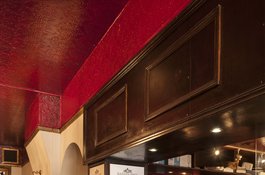 The Blind Beggar, interior detail in 2018
Contributed by Derek Kendall 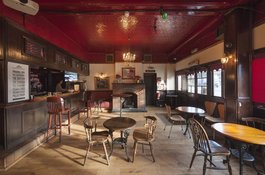 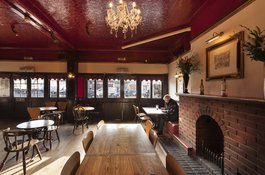 Inside the Blind Beggar in the 1990s

Silent footage from the 1990s inside the Blind Beggar - definitely before the smoking ban.