During the 1980s the landlord of the Queen's Head was George The Pole... and yes he was Polish.

I moved to London in 1988 and a workmate took me to the Queen's Head and introduced me to George the Pole and his wife, Eileen.

George was indeed Polish aristocracy, or at least he would have been if his family had not had to flee in the 1905-1907 revolution, and he was the current Count Worzinsky (sp?)[Editor's note: the correct spelling is Wolozynski. Information from Leigh Lysette Dixon, George's granddaughter, 10 Aug 2021]. Eileen was actually a Londoner from the southwest of the city somewhere and I have a vague recollection of her telling me her father had been a policeman.

They were both lovely people and I remember it being the first place I had ever seen cherry vodka - he even had it on the optic.  Eileen loved lots of jewellery and I am not being unkind when I say she had a collection of the most 'interesting' wigs.

George did not seem to pay much attention to trivialities like licensing hours but it probably didn't matter as half his clientele appeared to be police detectives.  He died about 1989 or 1990 and Eileen ran it alone for a while but eventually it was too much and she sold it.  I have no idea where she went.

A neighbour - and former colleague - would go into the Queen's Head on Fieldgate Street. He said that the landlady claimed to be a Polish Countess... was she 'Katy' and married to George the Pole? (see above) I read this: '...the Queen’s Head, one of those pubs bigger on the inside than the outside, and so convenient I hear you say. Katy, is that what she was called? She runs a tight ship, the dossers are allowed in when they have money in their pockets. Piss away your last penny but don’t you dare start your singing, or George will have you outside on your arse before the end of the first verse of Kevin Barry...'1

The flat-faced three-bay building at Nos 85–87 was erected in 1907 with a two- storey (galleried) synagogue to the rear. This was for the Austrian Gemilus Chasodim congregation, and was founded by Simon Lewis, an oilman of Mile End Road (later Wentworth Street). Samuel Lissner of Cannon Street Road was the builder. No. 89 went up separately at the same time, built by George Barker for Abraham Steinberg, a grocer of 117 New Road who established a chandler’s shop here. Both developments (Nos 85–89) were assigned to Frederic Roger Betenson, architect. From the 1920s to the 1950s the synagogue was used as the Chevra Kehal Chasidim, different sects worshipping together, and perhaps reflecting a move from 33–35 Fieldgate Street or Black Lion Yard. A change of use for storage was approved in 1972, and later the former shtiebl became Tayyabs restaurant kitchen. Tayyabs grew from 1970s origins as the Spicy Foods snack bar at No. 89, adding other outlets before unifying the group in 2005, the Queen’s Head having closed in 2001.2 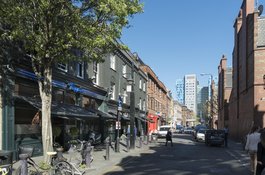 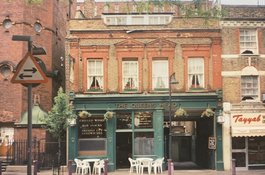 The Queens Head in the 1980s
Contributed by LeighD 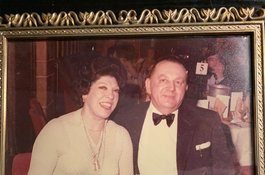 George and Eileen Wolozynski, proprietors of the Queen's Head pub, Fieldgate Street, to 2002
Contributed by LeighD