Shapla Primary School
Back to MapContribute

Sugar in the Square
Contributed by Bryan Mawer on April 14, 2018

In the early 1750s, on the SW corner of the school site, stood the sugarhouse of John Arney. It backed onto Well Street (Ensign Street), though its address for much of the time was 27 Wellclose Square and it was approached through an alley between Nos. 28 & 26.1 The risk of fire was great in the trade and the sugarhouse was brick built, though No. 26 and the frontage of No. 27, which was also part dwelling house, probably the men's room 2, were still the old timber buildings original to the Square. On John Arney's death in 1775 the sugarhouse passed to his son Scheve, who, after a short partnership with Mr Wackerbath around 1784, went into partnership with Ludwig Witte in 1794. Scheve Arney died in 1800.

Ludwig Witte, initially with his brother Henry, and then from 1807 with merchants Sir Charles Grave Hudson and later his son and heir, ran and improved the sugarhouse. The records of the Sun Fire Office show that in 1821 a new sugarhouse was being insured, as well as the old one. Witte became a very wealthy man, died in 1826, aged 81, and was buried at the German Lutheran Church in Trinity Lane. The younger Sir Charles continued to invest in the business, in partnership with Mr T. Hunt in 1825 and then Henry Jonas, until his death in 1827. Jonas was declared bankrupt by 1836.

In 1851 John Wagener purchased the lease of '26-27 Wellclose Square and a former sugar bakehouse adjoining no.27, the cooperage in Wellclose Square, mews at rear of nos 20-26, and 14-15 Well St' from the son of the late Sir Charles Hudson Palmer.3 As a young German refiner he had for a short time in 1839 been working in partnership with others in Ellen St, and soon after by himself in Mansell St. Around 1850 he followed the trend to move his dwelling out of the East End by purchasing Great Langtons, Hornchurch, Essex.4 He then moved his business from Mansell Street to 27 Wellclose Square, and commissioned the surveyor Charles Dyson to draw up plans for an addition to the sugarhouse.5 This was built to abut the northern end of the wooden dwelling house and overlap the front of the existing sugar house by some 10 ft. The addition was 60ft tall with a 16ft basement beneath, and 31ft square, all set upon concrete foundations 4ft wide x 2ft 6ins deep. The brick walls were 23ins thick in the basement and the first storey, above that 18ins thick. The basement held two steam boilers, one 28ft by 7ft diameter, the other 19ft by 4ft 6ins diameter, and extended forward by 14ft below ground to provide a vault in which the stokers could feed the boilers, with simple metal grilles providing minimal light and ventilation. Of the six working floors above, the ceiling heights were shown as, bottom to top, 8ft 6ins, 7ft 9ins, 7ft 4ins, 7ft 4ins, 7ft and 7ft, with a pitched roof above. Each wooden floor, except the top one, was supported by six evenly spaced columns. Metal fire doors on each floor, including the basement, gave access to the older building. Each storey had four small windows, and there were large loading doors, in place of one of the windows, on the lowest and highest floors. A neat pediment fronted the pitched roof, the corner of which can be seen behind No. 26, along with the rooflines of both the earlier sugarhouses, in photographs dated 1911 and 19136, and can be seen above the buildings fronting the Square in a 1920 photograph.7

Wagener closed the refinery in the early 1870s, and gave Charles Davidson, papermaker, a short lease for No. 27 and the sugarhouse.8 After John Wagener's death in 1884, his executors sold the whole site to William Woellwarth wine merchant.9 In 1911, No. 27 was occupied by Everett & Co, bonded carmen, contractors and shipping agents.10

The Danish Consulate
Contributed by David Charnick on March 9, 2018

To supply the major rebuilding campaign following the Great Fire of London in September 1666, timber was imported from the great pine forests of Scandinavia. This inspired the developer Nicholas Barbon to create Marine (later Wellclose) Square primarily for Danish-Norwegian timber merchants, who were said to have warmed themselves comfortably by the Great Fire. Laid out from the 1680s, this was his only major project in East London. In 1767 the German-Norwegian brothers Georg and Ernst Wolff moved their timber trading firm to 21 Wellclose Square, extending it next door to No 20. Ernst was to produce a Danish-Norwegian dictionary, a ready-reckoner for timber pricing, and a history of the Danish Church, which stood at the centre of the Square until it was demolished to make way for the school established in connection with the Church of St Paul, Dock Street.

In 1787 Georg became the Danish-Norwegian consul. Being a practical man, he undertook his consular duties from his business address at 20-21 Wellclose Square, which was decorated in 1796 with two Coade stone reliefs depicting the arts and sciences. Georg retired from the consulate in 1804 and his son Jens took over until the consulate was closed in 1807. The building survived until 1968, when it was demolished as part of the wholesale demolition of Wellclose Square. The Coade stone reliefs were removed and transferred to the Norwegian Embassy in Belgrave Place, Belgravia, where they can still be seen decorating the main entrance. The Shapla School now stands on the site of the Danish Consulate.

Shapla Primary School
Contributed by Survey of London on Oct. 9, 2018

In 1983 local pressure caused the GLC to move a planned and already substantially designed school from a previously intended site south of the St George’s Estate to the west side of Wellclose Square which had been cleared in the 1960s. At first called Wellclose Primary School, this was the first ILEA primary school completed to a brief that favoured greater enclosure of teaching spaces, a return to classrooms. In responding to that brief Ann Webb, the project architect in the GLC ILEA Department of Architecture, was evidently influenced by Hampshire primary schools and Ralph Erskine. Advice from the GLC’s Historic Buildings Division helped to preserve the layout of the square east of the school. Built in 1985–6, it opened in 1987. It is a low complex of two offset rectangles, with small central courtyards linked by a corridor, stock brick under corrugated aluminium hipped roofs, bright green, offset by yellow elevational elements. The strong stock-brick wall on the south side of Graces Alley, with its broad piers articulated by gabled panels, was a late addition to the school-building project, introduced to provide a firm buffer so as not to jeopardise plans for the restoration of Wilton’s Music Hall (see below), or expose children to harassment from its customers. The wall was designed to harmonise with the façades across Graces Alley. ‘Shapla’ is Bengali for water lily, the change of name a reflection of then recent shifts in local demography.1

Demolished buildings on the east side of Ensign Street, 1964
Contributed by Survey of London on Dec. 19, 2016

A view west to Grace's Alley in 1964, showing demolished buildings on the site of Shapla Primary school and the former Brunswick Maritime Establishment sailors' home beyond, from the Tower Hamlets Archives collection: 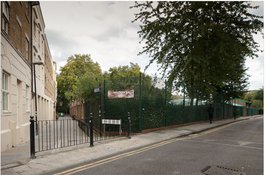 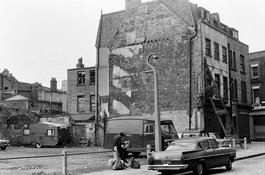 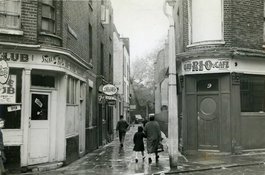 The Rio Cafe (on the right)
Contributed by Numbi Arts 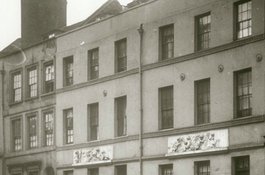 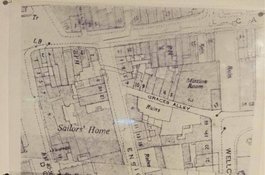 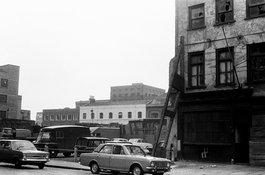 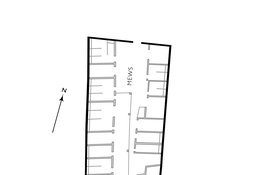 26-27 Wellclose Square with sugarhouse and houses on Well (Ensign) Street, from a lease plan of 1851
Contributed by Helen Jones