Pier in middle of Leman Street
Back to MapContribute

Royal Mint Gardens
Contributed by Survey of London on May 1, 2019

The north side of Royal Mint Street was clear in the 1970s save for car parking and the survival next to Mansell Street of a hydraulic accumulator tower of 1894 and 1913 from the Midland Railway Company’s depot. With the formation through this site of the Docklands Light Railway in the 1980s, the British Rail Property Board, as landowner, planned to develop the remaining ground, which widened to the west, employing Watkins Gray International (Ivor Berresford) as architects, working with Ove Arup & Partners, and contemplating air rights over the railways. The Royal Fine Art Commission judged an office scheme, which rose to ten storeys at its west end, unacceptably bulky in 1989. Revised plans from Oxford Real Estates Ltd and the same architects up to 1996 were consistently rejected by the Commission, whose Deputy Secretary, Richard Coleman, noted ‘The site requires the skills of an architect of immense ingenuity and a developer with deep pockets and considerable nerve.’1

Even so, the ten-storey office and retail scheme gained planning permission in 1998. It was amended in 2003–4, but again deferred. From 2008 the project and planning consents were taken forward by Zog Brownfield Ventures Ltd, a joint venture between the Zog Group, a consortium of property companies, and HBOS (Halifax Bank of Scotland) that had been incorporated in 2007, employing GML Architects Ltd. Network Rail Infrastructure Ltd, which had inherited the freehold, granted ZBV (RMS) Ltd an option on a 999-year lease on the 2.7 acre site and air rights. In 2011–12 this was assigned to IJM Land, a major Malaysian construction and property company, which had formed another joint venture, IJM Land Berhad/RMS (England) Ltd. This new developer employed Broadway Malyan to design a new and differently purposed complex. This proposed a twelve-storey block to the west for a 236-room hotel with 33 apart- hotel spaces and 79 flats, and, further east beyond open ground connecting Royal Mint Street and Chamber Street, three fifteen-storey blocks for 266 flats above shops and offices, all cantilevered over the railways as far as Chamber Street, where use would be made of the London and Blackwall Railway viaduct’s arches. This huge project, which can only be described as bulky, was deemed acceptable. Farrells (London) LLP were engaged as architects, working with AKT II as structural engineers, and Chris Blandford Associates as landscape designer. Reworked plans for what was named Royal Mint Gardens were advanced and agreed in 2014–15. The eastern section was taken forward first, revised as 254 mixed-tenure flats in fourteen-storey blocks, incorporating ground-floor shops and first- and second-floor offices, with central gardens at third- and fifth-floor levels, and is being built in 2018–19 by the JRL Group’s Midgard Ltd. The western hotel block is set to follow.2

Public lavatory and cattle trough at the south end of Leman Street, 1967
Contributed by Survey of London on Feb. 16, 2017

This colour slide is from the collection of the Tower Hamlets Archives, and shows the 1920s entrance to the public lavatories built against south side of the pier supporting the railway line (formerly the London & Blackwall Railway) that crosses the south end of Leman Street, and the cattle trough, one of many installed by the Metropolitan Drinking Fountain and Cattle Trough Association between 1867 and 1936. The WCs and presumably the trough were later removed, probably around 1986 during construction of the support piers for the Docklands Light Railway, which runs immediately to the south side of the old railway bridge. With thanks to members of the Living in Stepney Facebook Group for confirming the exact location of this image. 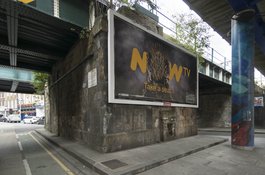 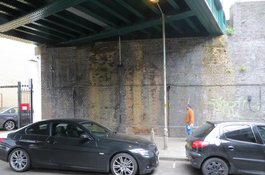 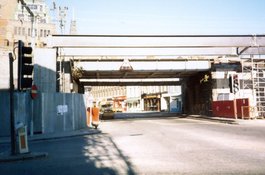 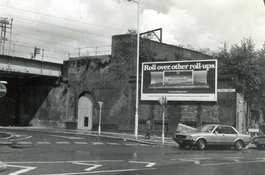 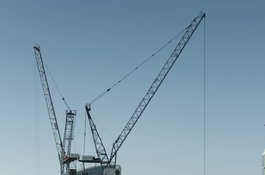 Royal Mint Gardens under construction in February 2019, view from the southeast
Contributed by Derek Kendall