1876 rebuilding of a public house with 17th-century origins, renamed by the boxer Daniel Mendoza when he was the landlord, closed about 1903

Some notes on the Lord Nelson
Contributed by stephen.r.harris on Dec. 21, 2016

The building at 299 Whitechapel Road was formerly the Lord Nelson pub.  It was present here as a pub by 1807 when Joseph Louch, Victualler at the Lord Nelson, held an insurance policy with the Sun Fire Office.  The pub held a full licence and by the turn of the twentieth century was advertising itself as a "Wine & Spirit Stores".  A photograph of the pub dated around 1903 is held by the Museum of London and in the photograph the licensee's name can be seen displayed as Alfred Preston Starkey. Starkey may have been the last landlord here, as the pub seems to have closed at this time.

The predecessor of the present building at 299 Whitechapel Road was a pub and victualling house with a skittle ground to the rear. This was known as the Babes in the Wood in the eighteenth century, the property having been first developed on a 500-year manorial lease in the seventeenth century. Daniel Mendoza (1765–1836), the self-styled ‘pugilist’, a prize-fighter and the boxing champion of England in 1792–5, became the landlord here after losing his title. Aldgate born and of Portuguese-Jewish descent, Mendoza was credited by Francis Place with curtailing the abuse of Jews by setting up a school that taught other Jews how to box. It is likely that it was Mendoza who renamed this establishment, perhaps as the Admiral Nelson in the first instance. Mendoza and his wife (also cousin) Esther raised six children here in relative quietude. They had moved on by 1812 after which the establishment was known as the Lord Nelson. Nelson Court (later Nelson Place), to the rear and entered under the pub’s east side, had been Yorkshire Court (or May’s Alley), ten houses present by 1740 and owned by the Fairfax family of the Grave Maurice (see 269 Whitechapel Road).1

The Lord Nelson was rebuilt in 1876 to plans by R. C. James, architect, with W. E. Young of Leytonstone as the builder. Fire damage in 1888 appears to have caused the building to be reduced a storey in height. The pub closed around 1903 having lost its back parts to the Whitechapel & Bow Railway a few years earlier. The facade brickwork was cleaned up as part of the High Street 2012 project. A handsome staircase with twist balusters and newel post survived into the 1990s.2 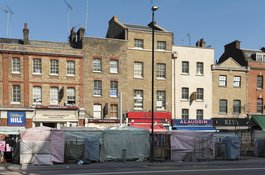