Paul Turquand built a sugarhouse on this large and deep site in 1757. The premises expanded and were taken by George Lear & Co. (later Lear & Cobden) from 1780 to 1815. On another part of the site, Richard Witherstone had established a brewhouse in the 1750s, enlarged around 1780. James Schooling, an ironmonger, took over the whole site around 1817 and formed a stove and range factory around a central open yard. This continued into the 1890s (sometimes as Schooling and Everet), its fitting workshops at the east end of the site.1

Harry Richardson, a builder, then took the premises and rebuilt for stables. Other short-lived uses followed, including for Hebrew classes, and in 1906 H. Lotery & Co. spread from its base on St Mary Street onto the east part of the site, building offices and stores for its clothing enterprise in 1921–2, with Hobden & Porri as architects. Bomb-damage repair and reconstruction at this end of the site was carried out for H. Lotery & Co. in 1947–52 to plans by Arthur G. Porri. The same parties combined with Griggs and Son Ltd, builders, for work at the site’s west end in 1955–6 to give the property its present two-storey brick-faced front range and an extensive single-storey precast-concrete framed clothing factory and warehouse behind. Ormstein & Massoff immediately succeeded and this was Mornessa Ltd’s mantle (coats, suits, skirts and sportswear) factory and warehouse by 1959. Clifton Slimline Ltd and A. Dakri & Co. Ltd followed in the 1980s. The premises were converted in 2011 to house a college on the upper storey of the front range above the Greatorex Business Centre.2

Abdul Shukar Khalisdar describes how he started this business centre in 2012
Contributed by Survey of London on Dec. 2, 2017

Local businessman Abdul Shukar Khalisdar worked in a clothing factory in this building as a youth, here he recounts how, in later life, he leased it to start his workspace business.

"I bumped into the old landlord that I used to work for in the factory, cleaning cotton on Greatorex Street [8-10 Greatorex Street]. He used to own that building, he asked me, "What are you doing here?”

He said, “I still own the building but these bloody tenants-” and he's complaining about the tenants not paying rent. I said what do they do from here? He said, “They're a college but the college business is all dead now and because of that, they're not paying my rent. I'm thinking of throwing them out.”..

As we're talking, we're walking and I'm following him. As I'm talking to him, I'm interested in going into this building. So once he's telling me all this, he's pressing buttons for me. I went into the building and it's about 4000 square foot spread over two storeys with a small basement. They were running it as a college, but it's all dead, everyone's gone. You could tell that once upon a time, it was a thriving place but it's not anymore. Got thinking to myself, "Hang on, this could be my first business centre.”…

…I said to him [the landlord], "hang on, what's the situation with the existing tenant?” He said, “He owes me three months’ rent so therefore I'm going to throw him out because he's not going to pay me. He's been promising me and now I've come down today. ..I said okay, what was the deal with these guys? He said, “They had a long lease eight years. They defaulted, this is how much they're supposed to pay rent each month”.

[The landlord was] a very old-school Asian gentleman, Ugandan-Asian. He's very hard-working and he's in his late 60s but he still goes around minding the shops, minding all his business. I said to him, "how much?" He told me exactly the amount and I said, "okay, if you're going to throw them out what are you going to do?" He said, "Well, I’m going to have to find another tenant.”

I said, "Well, talk to me I'm interested." He goes, “What are you going to do there?” I told him exactly one thing that I'm doing. I wanted to run one floor is going to be dedicated for my training and development business. The other floor I'm going to turn into small offices and rent it out. He said, “Okay”. He said, “You can have it." I said "Well, what about these tenants?" He said, “I'm going to serve them a notice." I said, "but I don't want the existing lease. If you're going to give me a lease, I want the new assignment, a brand new lease."

..He said, “You'll have to pay me a premium”. I said, "no, I'm sorry I'm not going to pay you a premium, look at the state. You are desperate right now. Fine I'll pay you premium, but I want rent free." He said, “Okay if you give me three months’ rent as premium I'll give you three months’ rent-free." I said, "no, I will need a year." Then he goes, “Forget the rent-free, forget the premium." I said okay, fair enough, forget all that.

He goes, “Give me three months’ rent to clear the other guy's dues and I’ll assign the lease to you, I don't want the premium.” Technically I said, "no, I'm not going to pay you on behalf of the other guy. I will pay you three month's rent as deposit. You can keep that, at the end of the lease you can give me that back, less of the dilapidation.

I'm going to do a lot of work in here, I want it to be rent-free, but you're not going to give me rent-free either." He said, “No." I said, "Fine I'll take it as it is." That's how it happened really, [and] I brought the architects in.

Tower Hamlets is not what it was 20-30 years ago. We have the average council three-bedroom flat being sold for…let’s just say £180, 000…the average three- bedroom flat in Tower Hamlets I think is just under half a million pound. Now, from a business perspective it’s fantastic. For somebody who owns properties or who is in the property game, it’s a good thing. But when you take a step back and think about those that have been left behind by the regeneration and the mainstream provisions have failed. I’m talking about families that are still here, living on the same council estate or in the same flat that we were in when we were growing up 20, 30 years ago. If you ask these people would you still stay here, if you had the chance the answer is no. Would you like to be a home owner? Yes. Why aren’t you a home owner? Couldn't because I couldn’t afford it and we missed the boat now. I feel for those families because I think they’re beginning to feel ostracised or marginalised and it’s because of the social policy changes because of the gentrification that has taken place, where we are seeing a lot of white middle class families, not so much families, but professionals moving in. We are also seeing a lot of foreign buyers buying because it’s a good area, to invest in the rental market. A lot of stock is being owned by the rich now and the poor are still being left behind. That’s one part.

..In so far as living conditions and standard of living is concerned, it’s definitely gone up. It’s improved… But whether the equity level has increased in those families or whether the disposable income of those individual households has increased but I don’t think it has. They are living well but they’re still living hand-to-mouth. They’re still just above the poverty line or below in some cases.

My children, if they walk down the street [in Whitechapel/ Spitalfields] they will not be recognised. In fact, it is a challenge to try and get my children to walk down the street. Well, I say children while I have one daughter who’s three year old but that’s not the child but I’m talking about my nephews and nieces. They don’t understand. They had a very middle class upbringing… they come here every so often purely because they feel you have to go to Bangla Town, if you are a Bengali or you have to go to Southall, if you are Indian. That’s what they think. 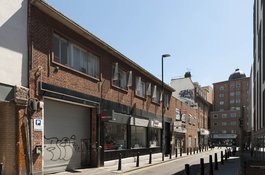