2–6 St Mark Street
Back to Map

The clearance by the agents of Edward Hawkins of three Alie Street houses around 1815 permitted the formation of Alie Place, a short access road leading to the Tenter Ground, now the north end of St Mark Street. Two four-storey stock-brick buildings (1 and 2 St Mark Street) went up around 1824 to flank the north end of the new opening towards Alie Street, bearing channelled- stucco lower storeys and first-floor relieving arches, with their entrances on Alie Place. A counterpart pair (5 and 8 St Mark Street), a storey lower and probably built in 1828–9 as 1 and 2 Tenter Ground, faced what is now North Tenter Street.

No. 1, to the north-east, was for long occupied by a cigar manufacturer, Maurice Newman, and remained in commercial use by a trunk and packing-case manufacturer in the 1860s. No. 2, north-west, was first occupied by William Henry Graves, a surgeon and District Medical Officer, whose lease passed to his successor John Liddle, and then to Alfred Turner, a solicitor, later in the century. All likely used the forerunner of the low range to the rear that is 4 St Mark Street as a surgery or offices. Beyond at No. 8, to the south- west, the Plumbe family, arrowroot agents and perhaps first occupants, were resident for several decades. No. 5 was used as a ladies’ school until at least the 1860s. By the 1890s, a shopfront had been inserted at No. 1, which now accommodated one of the area’s principal makers of Passover cakes. Nos 2, 5, 6 and 8 were at this time occupied, respectively by a wholesale clothier, a butcher, a rabbi (Abraham Goldstein), and a gasfitter.1

The single-storey range between Nos 2 and 8 (Nos 4 and 6) was piecemeal development made outwardly homogenous in 1900–1 by Marks Specterman, a bootmaker, employing H. Wall & Co., builders.2 In 1938–9 the front shop (No. 2) was taken by D. S. Badwal & Co., ‘indian herb merchants’, with No. 4 to the rear made a café run by Millie Greenwald. These premises were united in the 1940s for the café, now run by Giuseppe Grandini. From 1950 the establishment was in the hands of Salehbhai Jafferji (1907–1987), born in Zanzibar, who lodged Indian merchant seamen above the café, which came to be known as Halal Restaurant by the 1960s. Owned and run since 1981 by Usman Narangali, a former merchant seaman from Kerala who had worked his way up from the kitchen, and then by his son, Mahaboob Narangali, it lays plausible claim to being East London’s oldest continuing Indian restaurant.3

No. 8, to the rear, long housed a corner shop, called City Food Store until 2017 when the space was converted to use as a barber’s shop. Across St Mark Street, No. 1 had been turned to use as a restaurant by 1935, held by H. Borenstein and later styled Fredson’s Café. Following shoring to prevent collapse, that whole property was rebuilt in pastiche form in the late 1980s as 28 Alie Street, offices with a two-storey and attic four-bay rear wing that replaced a single-storey shop and two-storey workshop. No. 5 was retained and repaired.4 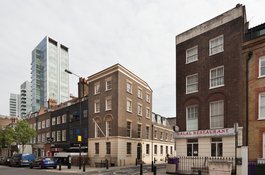 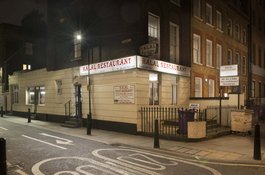 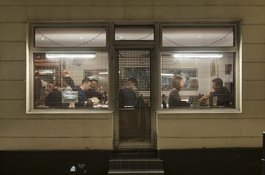 Contributed by Survey of London on March 1, 2019