Henrietta Barnett and her husband, Samuel, moved to Whitechapel in 1872 when Samuel became the vicar of St Jude's Church. Henrietta was a protegee of Octavia Hill, having worked with her in Marylebone as one of her "District Visitors". This work entailed housing poor families and advising them on managing their expenditure and family welfare.

Octavia recognised how important it was for poor families living in crowded and polluted urban areas to have open spaces and parks to relax and play in. She worked with the Open Spaces Committee of the Kyrle Society to provide these by converting disused burial grounds and churchyards into parks for the poor.

Henrietta followed this idea and sought to provide parks for children living in cramped Whitechapel tenements, hoping to remove them from the area's overcrowded streets where crime and violence were endemic. To achieve this, she opened a playground in Wentworth Street, but when vandalism forced its closure, she transformed a disused Quaker's Burial Ground, established in 1687, into Baker's Row Park for the children.

The design of the new park, which was opened in 1880, may well have been created  by Fanny Wilkinson, who is regarded as the first women landscape designer in the country. A photograph of it in Mrs Basil Holmes' book, the London Burial Grounds, 1896, closely resembles Fanny's designs elsewhere in London, for the conversion of burial grounds, although Baker's Row is on a smaller scale. The park had curved paths which surrounded lawns interspersed with trees and rose beds. Mrs Holmes described the park as "well laid out and kept and chiefly used by children", illustrated by the photograph in her book.

Providing this park not only gave local children a safe place in which to play, but also a rudimentary knowledge of gardening - something Henrietta regarded as crucial to their education and well being. She later recalled that by 1886, children in Whitechapel, "romped in the playing fields, dug and delivered little gardens" whilst "flowers grew in windows".

In 1896, Baker's Row was renamed Vallance Road in honour of Mr W. Vallance, the Clerk to the Metropolitan Board of Guardians. The park then became Vallance Road Recreation Ground.1

By 1670 Edmund White, a London merchant, held a large property in the vicinity of what was soon to become Baker’s Row (Vallance Road) and development was afoot. A quadrilateral of about an acre, corresponding to all but the western and northern parts of Vallance Gardens, was taken from White in 1683 on a 110-year lease. The Society of Friends’ Six Weeks Meeting acquired the lease in 1687 for the formation of what came to be known as Whitechapel Quaker Burial Ground. Twenty trees were planted round the perimeter in 1690, and the ground was levelled in 1698. Quaker burials had no monuments. A few associated houses were built alongside and the property was walled in stages by 1743 when a new 500-year lease was secured. The cemetery was enlarged southwards by the 1790s, an extension that was built over soon after the burial ground closed in 1857.

In this disused ground, now a rare empty space in the area, a large mission tent was erected in 1864. William Booth took charge of the mission a year later and launched what was to become the Salvation Army. In 1879–80 Henrietta Barnett, working through the Kyrle Society’s Open Space Committee (forerunner of the National Trust) and a lease to the Whitechapel Board of Works, arranged for the burial ground to be adapted to be a park for children – Baker’s Row Recreation Ground, from 1896 Vallance Road Recreation Ground. The site was landscaped with serpentine paths, the northern line of which remains marked by a row of plane trees, and given a long shed along the south side for a covered playground (removed in 2002). Two drinking fountains, a gable-topped pillar and a font-like granite bowl given by the Metropolitan Drinking Fountain and Cattle Trough Association, remain in place.1

Significant Second World War bomb damage north and west of the recreation ground led to its enlargement. In 1960 a stone sundial with a bronze plaque, designed by W. H. Charles, architect, was installed, with replanting by Stepney Council. Thereafter the gardens were beset by anti-social behaviour and the sundial disappeared sometime after 1990.2

Relandscaping in 2002–3 for Tower Hamlets Council in connection with adjacent housing development gave the park the sense of a garden square. It gained a northern playground, new planting and railings with ornamental openwork, including iron roundels devised with pupils from Swanlea School.3

On what was the south side of a northern arm of Thomas Street (Lomas Street since 1970), at what is now the north-east corner of the gardens, was Whitechapel Workhouse’s Male Casual Ward, which replaced seven houses and stood from the 1860s to the 1950s. Jack London described his time staying here. Much the greater part of the workhouse, largely built 1856–60, was across Thomas Street, in Mile End New Town. However, its imbecile or lunatic ward to the rear with a mortuary, also fell in Whitechapel parish. Its cramped, airless situation was criticised and improvement works were carried out in 1888–9.4  Through the same period the Grasshopper public house was at 72 Baker’s Row, on the south side of the Thomas Street corner.5

Vallance Gardens was actually a densely packed burial ground for the Society of Friends, in an era when Quaker burials had no monuments. Recent work for Crossrail did not disturb these burials. I monitored work there during snow and into darkness in 2012-13.   There is a map of the Quaker burial plots in this document:  http://learninglegacy.crossrail.co.uk/wp- content/uploads/2016/06/C261-Vallance-Road-Gardens-GWB-Fieldwork- Report-v1-31.10.12.pdf 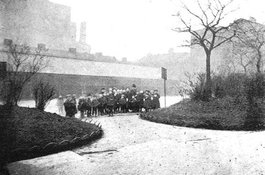 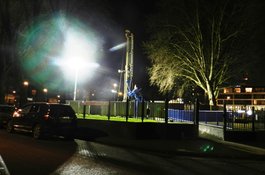