Whitechapel Station
Back to MapContribute

1884, station entrance (converted) with buildings and platforms for the Metropolitan District Railway, altered 1899-1902 and 2013-18 | Part of Whitechapel Station

Thomas Barnes, ‘bricklayer and builder’, and John Lay, a bricklayer of Newcastle Street, Whitechapel, acquired two shophouses on the site that later gave way to Whitechapel Station in 1805 with a large plot of land to the rear, Barnes being primarily responsible for the development of lands further north. Behind they or their successors built the eighteen small houses of Hope Place around 1820. Another twenty or so even smaller houses had been built to the rear of the Grave Maurice, as Devonshire Place, and between, as Harrison’s Buildings. All these were cleared for the East London Railway after the sites were acquired in 1873.1

A colour slide from the Tower Hamlets Archive collection:

Whitechapel Station
Contributed by Survey of London on Nov. 28, 2017

Substantially rebuilt in 2013–18 for Crossrail (the Elizabeth Line), Whitechapel Station has an intricate and accretive history, several indicators of which have recently been erased.

The origins of the station lie with the East London Railway Company, formed in 1865 to see through a scheme initiated by William Hawes, to connect north and south London by adapting the Thames Tunnel and linking to other lines at Liverpool Street and New Cross. Sir John Hawkshaw was the project’s engineer. The southern section was built first, the northern stretch did not open until April 1876. Thomas Andrew Walker was the contractor for the line. Premises at what is now 277 Whitechapel Road were acquired in December 1873 for a ‘principal station’. The site of No. 275 was added, but when the station was built in 1874–5 that proved surplus to requirements. The three-storey four-bay Italianate building at No. 277 has twin elliptically arched public entrances; the band below the first-floor windows and the parapet was lettered. An illuminated canopy was built across the front in 1930. That was replaced by twin leaf-like steel-and-glass projections around 2000, those also now removed.

Under lettable offices, the entrance lobby and a short flight of stairs led to an inner booking hall, on a more north-westerly axis in line with the tracks and with a glass roof on iron openwork trusses. There was a booking office to the west and a waiting room to the east. Through an arched opening in the end wall, dog-legged staircases led down to the platforms. The brick back elevation of the booking hall had an odd grandeur, with a triple arch below a tall semi-circular parapet perforated by five oculi, perhaps to mitigate the effect of smoke and soot on the top-lit booking hall while also admitting some light. All but the front block was demolished in 2016.1

The Metropolitan and Metropolitan District railway companies had considered building a line east of Aldgate prior to the formation of the East London Line in connection with the bedevilled plan to complete the ‘Inner Circle’. The idea was revived in 1873–4 by George G. Newman of the legal firm of Newman, Dale and Stretton, with a plan for a spur to link to the East London Railway at Whitechapel. Through the Inner Circle Completion Company this gained support from the Metropolitan Board of Works. The Metropolitan and District companies took the scheme over in 1877, the former’s Chairman, Sir Edward Watkin, only interested on account of the Whitechapel link, and brought in Hawkshaw to devise a route. Watkin became Chairman of the East London Railway Company and the relevant Act was granted in 1879. The line opened as far as St Mary’s Station on the south side of Whitechapel Road in March 1884 and on to Whitechapel in October 1884. Hawkshaw was the senior engineer working in collaboration with his pupil John Wolfe-Barry, to whom close engagement appears to have devolved, with Robert Davison as resident engineer. The contractors for the works of 1883–4 were Lucas & Aird. Train operations were subject to a complex joint working agreement between six different railway companies.

The site that is now 275 Whitechapel Road, sold by the East London Railway Company in 1876 and set to be used for the Working Lads’ Institute in 1882, had been reacquired, along with land to the rear of Nos 269–271 for a second Whitechapel Station. That was built in 1884 by Lucas & Aird, working with Holliday & Greenwood, probably just for the front block, to designs by Wolfe-Barry.

This station was a simple single-storey booking hall with a front of twin arches and a cornice (originally flanked by lettering, METROPOLITAN DISTRICT RAILWAY above, WHITECHAPEL TERMINUS below), the eastern arch for entrance and circulation directly to the platform, the western for egress via stairs from a basement-level passage. Internally, there are arched timber roof trusses, as there were in the now demolished booking hall and passage beyond. The space above the building was soon made use of for advertising. A single-storey and basement hipped-roof block behind Nos 269–271, still extant, originally housed offices for a booking clerk and parcels, a ladies’ waiting room and lavatories above a porter’s room, an inspector’s office and stores. To start with there was just one platform, that now to the north, under an iron and glass canopy, with lay-byes or sidings (as this was a terminus) along the south side of what is now Durward Street to the north-west, and where the southern platform was to follow to the south-east. Thomas (Fulbourne) Street, Court Street and Woods Buildings had all to be sustained by bridges. The Court Street footbridge is supported by octagon-section built-up steel stanchions and girders of the 1880s, similar though smaller in scale to steelwork at Mansion House Station. 2

Extension of the District Line eastwards to Bow for a link to suburbs beyond was a joint enterprise by the Metropolitan District and London, Tilbury and Southend railway companies. The Whitechapel & Bow Railway Act of 1897 led to works that began in 1899. The line opened in 1902. Cuthbert Arthur Brereton, a partner of Wolfe-Barry, was the engineer and the contractor was John Price. There was substantial demolition, underpinning and reconstruction behind and at 279–317 Whitechapel Road and the station was reconfigured for the new line to run over the low-level East London Railway Company’s tracks of the 1870s. That meant removal of most of that line’s platform canopies to throw plate-girder bridges across. A covered footbridge over the District Line immediately west of the East London Line with stairs down westwards gave access from Whitechapel Road to the Metropolitan and District Line platforms until 2016 when it was removed. The Fulbourne Street and Woods Buildings bridges and the superstructure of the Court Street bridge were replaced in 1899–1902 in plate-girder form with arched-plate flooring. The Woods Buildings footbridge was removed in 2013–15.3

From 1902 circulation to and from Whitechapel Road was combined by knocking through from the District Line’s passage to the booking hall of the 1870s at No. 277. The station entrance at No. 275 was given up, and that single-storey front building was adapted for use as a shallow shop with the Whitechapel Working Men’s Temperance Club’s billiard room behind. In 1923 there was a new shopfront for Appleby & Matty’s gown shop. Other shop uses followed, a mezzanine was inserted, and at the time of writing the whole unit is a coffee shop.

To the far north-east, south of Durward Street and behind 12–14 Vallance Road, a four-bay electricity sub-station was built in 1904–5 for electrification of the District Line. From 1933 and after mergers all running was taken over by the London Passenger Transport Board. Decoratively tile-lined pedestrian interchange subways were formed in 1935–6 to improve internal circulation between the East London and District lines, Balfour Beatty and Co. Ltd being the contractors for the Board’s engineers. In 1951 a relay room and staff facilities were added to the east of the substation by Whyatt (Builders) Ltd.4

Air-raid damage to the District Line in 1941 included the loss of sections of the platform canopies east of Court Street. From 1939 there had been plans to build a ‘booking-on centre’ at Whitechapel Station, to provide facilities (mess room, locker room, etc) for staff on the eastern parts of the District Line. Eventually, in 1968, this scheme was seen through where the bomb damage had occurred, to plans by the London Transport Architect’s Department. A large single-storey block of eight-by-four bays on a precast concrete deck was placed above the platforms. Latterly known as the Group Station Managers’ Building, this was reroofed in 2014.5

The northernmost bridge carrying the District Line over the East London Line was replaced in 1983 with the removal of adjacent platform canopies. Elliptically arched brick bridges of the 1870s that carried Winthrop Street and Durward Street were replaced in 2015–16. Despite this and other alterations, the East London Line’s robust brick retaining walls of 1875, built with deep recesses between buttresses, segmentally arched at their heads, as inverts and in section, survive and are due to be made newly prominent in 2018.6 North of Durward Street, the East London Line cutting remains open.

The reconfiguration of Whitechapel Station for Crossrail in 2013–18 has been carried out by BBMV JV (a joint venture of Balfour Beatty, Morgan Sindall and Vinci Construction) as contractors, with BDP, architects, and Arcadis, engineers. The front block of 277 Whitechapel Road has been retained. For rebuilding of the ticket hall behind, from 2016 to 2018 public access has been via a temporary station on the west side of Court Street; this replaced a small 1950s building. The capacious new station concourse, principally entered from 277 Whitechapel Road, will be an openwork steel-framed structure supported by struts on the brick walls of the 1870s cutting with which it will be aligned, slung low to allow light down to the East London Line platforms before rising in the form of a ‘floating’ bridge across the District Line. There will be a secondary entrance to the north, from a new public square. The long concourse is to have a sedum-planted roof. For the Crossrail tunnels, 30m below ground level, shafts were sunk either side of the East London Line off Durward Street, and on the west side of Cambridge Heath Road. The line is due to open in December 2018.7

Whitechapel station is actually two stations, one above the other. The original, nowadays the Overground platforms, opened in 1876 when the East London Railway extended its reach from Wapping to Shoreditch. The line between New Cross Gate (as it is now) and Shoreditch was created to provide a cross- river service by using the Thames Tunnel, created by Marc Isambard Brunel and Thomas Cochrane. While an impressive piece of engineering, the world’s first tunnel beneath a navigable river, it had proved a commercial failure since its opening in 1843.

The second station, whose frontage is visible on Whitechapel Road, is the station created in 1884 when the District Railway took a great leap eastwards from its Mansion House terminus in the City. The resultant Whitechapel and Mile End Station thus became its new eastern terminus. It remained a terminus until in 1902 when the Whitechapel and Bow Railway was created, linking the District Railway with the London, Tilbury and Southend Railway at Bromley-by- Bow Station.

The East London Railway was serviced from 1909 by the Metropolitan Railway via a loop of track called St Mary’s curve (after the now disused St Mary’s Station). However the East London Line became a service in its own right in 1913 when the line was electrified. The Metropolitan then ceased to come as far east as Whitechapel until 1936, when it offered a through service to Barking as the Hammersmith and City service.

While Whitechapel has undergone many changes, particularly the present transformation for Crossrail, its structure and its services are reminders of how this busy station has served a growing metropolitan area and connected it to London at large. 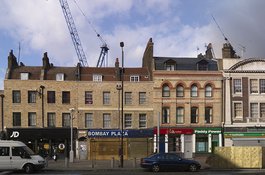 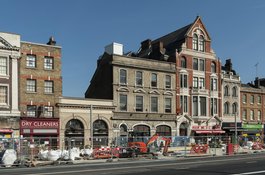