Leman Locke
Back to MapContribute

Built in 1861–3, the German Mission Day School replaced an eighteenth-century tenement and family-run bakery. The purpose-built school was one of a handful clustered on Buckle Street and the eastern extension of Alie Street, primarily serving the large local German population during the nineteenth century.1

The school was designed by City architect, Edward Ellis. With a long elevation to Buckle Street and a steeply pitched gable roof, the two-and-a-half storey building assumed a typically institutional Gothic Revival style. It was formed of London stock brick with black and red headers above its openings. A large ground-floor corner schoolroom for boys was accessed through decorative double-doors located in a lower extension facing onto Leman Street, while an office and a schoolroom for girls were situated on the first floor. The top floor provided separate living accommodation for the school’s two teachers.2

Unusually, the German Mission Day School was not associated with one particular church. Instead, it was supported by a consortium of German churches and managed by a separate religious institution known as the ‘Mission Among the German Poor and Sailors in London’. Intended to serve poor children of seamen and preceding the Public Schools Act of 1868, this charity school was reliant on subscriptions from wealthy members of the City’s German community. The Mission School may have acted as something of a counterpart to the newly opened St George’s Infant School, which was established in order to allow working mothers to return to work.3

Education was an important aspect of the Mission’s work from its inception in 1849 when a small evening and Sunday school was established operating out of a leased house elsewhere in Whitechapel. Recognising the need for a morally instructive education amongst the diverse local German population, the newly built Mission School’s first cohort of pupils numbered seventy-five; the roll rose to 150 within a few years. But by the end of the century many German families had moved out of Whitechapel and leaders of the school concluded that, in the light of this and the great many free English schools then in operation, the ‘German Poor School’ should be given up. The school closed in 1897 and the schoolhouse was let out for commercial purposes, the rent channelled into funding adult and child German education in other parts of the capital.4

By 1903 the former Mission School was in use by the Jewish Working Girls’ Club (JWGC), a sister group to the Butler Street (now Brune Street) Girls’ Club in Spitalfields. The JWGC began in 1881 as a small sewing circle which met in a house in Prescot Street but relocated to the Gravel Lane Board School in Wapping in 1886 where it grew in size and scope under the watchful eye of Lady Katie Magnus.1

The purchase of the leasehold of the former Mission School building was made possible entirely through the support of one individual, Mrs Charles Henry, daughter of the prominent Jewish-American philanthropist, Leonard Lewisohn.2 Mrs Henry’s support was prompted by an anxiety to show American goodwill towards English Jews in the light of tightening immigration policies in the US, which restricted Jewish movement into the country as religious refugees. The building was adapted without significant architectural alteration to suit its new purpose by the architect M. E. Collins, who, on completion, reported that the Club contained ‘every accommodation, including the usual recreation rooms, a kitchen, scullery, library and other rooms’.3

Following its move to the spacious Leman Street building, the Club ‘exceedingly flourish[ed]’ well into the 1920s.4 At the time of its opening the JWGC was formed of over 200 members, with 160 regularly attending evening and Sunday classes in such subjects as needlework, cooking, Hebrew and religion, singing and drilling.5 The day-to-day running of the Club was reliant on voluntary contributions and teachers were mostly volunteers from the well-meaning middle classes. The Club was driven by the belief that ‘Jewish girls must be religious-minded, modest, well-mannered, good sisters, daughters and wives, and old-fashioned enough to believe that marriage was the finishing touch and the best touch of all.’ Girls were also encouraged to enter into respectable positions in domestic service or in the kitchens of local charitable institutions. Despite its traditional outlook, the Club engaged the girls in wider cultural, political and social concerns through social conversation, and a progressive class in business training was offered in the 1930s.6

Despite securing funds to purchase the freehold of the site in 1928, the financial position of the Club was frequently unstable, reliant as it was on the patronage of local Jewish worthies. The JWGC appears to have continued on until at least the late 1930s before closure around the beginning of the World War Two.7

‘There is excellent provision both by official and voluntary funds for seamen on shore, but though hostels with fine premises exist in theory for “British seamen”, the colour bar is operative, and in these hostels there is no place for coloured colonials. The Colonial Office, as a token recognition of responsibility, has at Colonial House, Leman Street, sleeping accommodation for twelve men, and a recreation room used by others. This hostel is in charge of a Warden and his wife…’1

Requisitioned for use by the War Office soon after the outbreak of war, the former Mission School at 17 Leman Street became a hostel for Black seamen drawn from the British colonies. Many West Africans and West Indians had responded to the call to support the British war effort by joining the merchant navy and served in perilous situations at sea. Their arrival on British shores however posed its own difficulties. Those who found themselves in East London encountered underlying racial tension at London’s docks. Despite a proliferation of local seamen’s hostels, ‘coloured colonials’ were frequently turned away or were reticent to take up beds reserved for them, aware that their very presence might stir up trouble, as it had in the recent past.2

The Colonial Office hostel at Leman Street was intended for twelve men, whose stay was limited to three weeks on the basis that they were only temporary residents in England. Accommodation included a basement dining room and kitchen, a ground-floor common room and office, a large open dormitory, and a small adjoining bedroom. The self-contained second-floor flat was assigned to the hostel’s Warden.3 Equipped with a billiard table and piano, the common room served an important social function, where, it was envisioned, ‘men can sit and talk’.4 Yet, in its provision and organisation, the miniature hostel fell woefully short, dogged by problems from the beginning and especially after the end of the war. Three successive wardens failed to maintain order in the house as disorientated young men arriving at the hostel often struggled to find places on ships leaving the port, overstayed and grew restless. One local woman who ran an independent boarding house for Africans at 5 North-East Passage despaired at the lack of support given to these men, who arrived with little or no knowledge of the culture and institutional systems in England. Although intended only as a place of short-stays for ‘the floating population’, the hostel frequently housed teenage stowaways and those with longer-term ambitions to settle permanently in the country. She recalled, ‘The Colonial Office opened a house and you know what it was known as? It was known as the government gambling den. I used to laugh at that. They did nothing for the poor boys.’5

Much to the dismay of local activists such as Edith Ramsey and Father St John Beverley Groser, by 1946 inefficient management of the hostel had caused the Colonial Office to quietly close the hostel. With ‘the Coloured Question’ becoming a topic of some national debate, the London County Council recognised the need to house growing numbers of Afro-Caribbean men, and particularly seamen, who continued to arrive in the East End due to its industrial and riverside character. It held that responsibility to provide suitable hostels for this group lay firmly with the Colonial Office, which was eventually persuaded to continue to support the Leman Street hostel under the leadership of a committee with mixed institutional affiliations, including Ramsey and Groser.6 After re-opening, discussions turned to consider the construction of a large purpose-built hostel. The bomb-damaged site of St Augustine’s on Settles Street was surveyed as was a property on Wellclose Square, but at the last minute the Colonial Office withdrew its support in a change of policy.7

A further more decisive closure was announced in October 1949. The Colonial Office argued that it had ‘no authority to provide accommodation for colonials permanently resident in the UK and this was primarily a matter for local authorities.’ It noted that similar hostels in Manchester and Liverpool had closed with no trouble and that sufficient accommodation was available elsewhere for Black seamen. This proved to be a contentious and lamented decision, for the number of Afro-Caribbean settlers in Stepney continued to grow, especially in the area around Cable Street, where living conditions were cramped and difficult. In a show of support, the LCC facilitated the transferral of Colonial House into private management. On its release in 1949, the building was regarded as ‘large, old and structurally in good condition’ by local inspectors.8 The hostel continued to operate for some years afterwards, partially administered through the London Council of Social Service.9 By 1959 the building was used by H. Bellman & Sons Ltd, mantle manufacturers.10

In 2009 Pinehill Capital SA Ltd proposed a twenty-three storey tower designed by Formation Architecture for this site north of Buckle Street. The planning application was refused permission on multiple grounds, including concerns about the impact of such a building on the listed buildings to its south. However, in 2010 the project was allowed on appeal. It was taken forward in revised form by OCM Luxembourg Leman Street Apart-Hotel SARL, which in 2012 gained permission for a 251-bedroom hotel designed by David Miller Architects. This went up in 2014–16 with Bennett Construction Ltd as contractors. It was seen through in its internal design by Grzywinski+Pons, architects, which firm disclaims responsibility for the ‘sterile’ tower.1

Image of Colonial House Snooker Room in 1949
Contributed by Survey of London on June 22, 2018 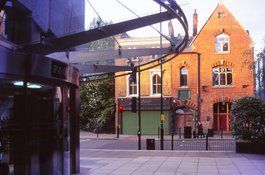 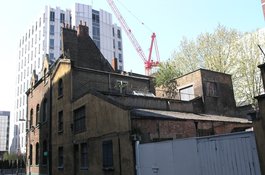 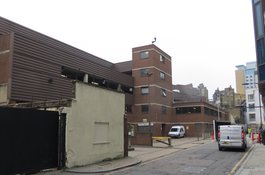 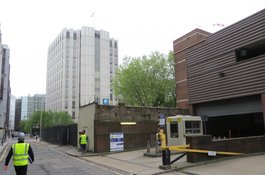 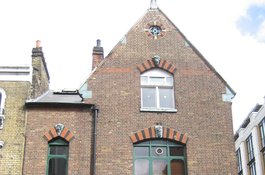 Sidoli's in Leman Street in 2007
Contributed by danny 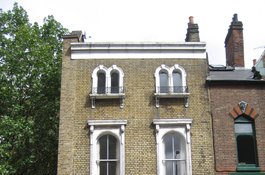