1 Whitechapel Road (including 2-8 Osborn Street)
Back to MapContribute

1 Whitechapel Road and 2-8 Osborn Street
Contributed by Survey of London on March 24, 2017

There was a Post Office at Whitechapel Road's east corner with Osborn Street from the 1840s. This came to be known as the ‘Russian’ Post Office, incorporating the ‘Ghetto Bank’, which was heavily used for remittances to eastern Europe, continuing into the twentieth century as Feldman’s Yiddish Post Office. From the 1890s there were kosher wine stores to its rear along Osborn Street adjoining the Victoria Wine Company depot.1

A large Second World War bombsite at the Whitechapel Road/Osborn Street corner saw temporary post-war use by stallholders. The four-storey corner building was built in 1957–8 to designs by Hugh V. Sprince, architect, by Walter Gladding & Co. Ltd, local builders (14 Davenant Street), for the freeholder, Tobias Chapper, of Wembley, to whom the property had come from D. Chapper, a wholesale hosier on Whitechurch Lane. Plans for the block to extend further along Whitechapel Road came to nothing. The upper storeys were let to be a clothing factory.

From around 1996 to 2015, when it was converted to be a branch of Efes Turkish Restaurant, the corner restaurant here was the Clifton, one of Brick Lane’s best-known names. Musa Patel (1939–1996, of Pakistani origin) is said to have opened the Clifton at 124 Brick Lane in 1967, this reportedly being the first licensed ‘Indian’ restaurant in the street. Soon after a café at 108 Brick Lane became the Clifton Kebab House.2

My maternal grandmother's maiden name was Edith Feldman. She lived opposite Finsbury Park, in the house her family had moved to from Feldman's Yiddish Post Office on the corner of Whitechapel Rd and Osborn St. The building there now is a fast-food joint. The Feldman family came originally from Pinsk before they settled in Whitechapel. They became quite wealthy because many early immigrants working in the East End rag trade used the post office to send remittances home to family in Eastern Europe. That's probably why they were able to get good educations - my great-uncle Israel Feldman was one of the first of the Eastern European Jews to qualify as a doctor, and there was a Dayan in the generation previous to him. 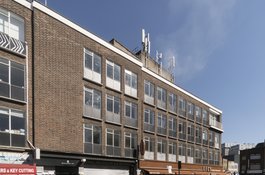 ! Whitechapel Road and 2-8 Osborn Street from the north-west in April 2017
Contributed by Derek Kendall 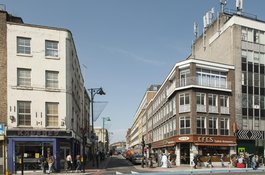