6 Durward Street
Back to Map

George Torr, proprietor of a manure works to the north, gave the west end of the Buck’s Row–Winthrop Street wedge that he acquired in 1861 to the parish of Whitechapel as a gift for the building of a ragged school. This project was inspired by the example of the Rev. William Weldon Champneys who had launched several such schools in Whitechapel in preceding decades. Further, there had already been ad hoc use of a coach factory on the south side of Little North Street for educating the local poor. The ragged school was built in 1862, to designs by Snooke and Stock, Torr’s architects. Characterised by stepped gables, it comprised a boys’ schoolroom to the north and a cross-range for girls and infants to the south, to accommodate 500 children altogether.1

Like other ragged schools, this was transferred from the parish to the School Board for London. In 1874–5 the East London Line sliced through to the east and in this densely built-up district the idea of expansion through a second school came to nothing. The Board decided instead to redevelop on the ragged- school site to a larger scale, to provide a school for 828. This went up in 1876–7 to designs by the Board’s architect E. R. Robson, with Atherton & Latta of Poplar as builders. It survives and is among the earliest of the Board’s schools still standing.2

This was a tightly confined site by the Board’s standards. The school had therefore to be unusually tall and compact, four storeys rather than the standard three. On a square plan, it was laid out with an open ground floor for a covered playground, one of the first examples of this arrangement among the Board’s schools. This was powerfully expressed as a basement of red-brick arches, rusticated with vermiculated stone bands. There was also a flat concrete and decoratively railed roof for additional outdoor space, this being more typical by this time. Double stone staircases in a service core to centre-east kept boys and girls apart. Infants were schooled on the first floor, boys on the second, girls on the third. Ample use of Portland stone dressings includes Walter Crane’s relief panels of vases of sunflowers. These do little to mitigate a markedly neo-Elizabethan parti that is also fortress- like, ‘austere to the point of severity’.3

Buck’s Row School was found to be unsatisfactory and dangerous in 1910, and it closed in 1911. Its ground-floor arcades bricked in, it was adapted for use by Solomon Hanstater’s ships’ chandlery and there was short-lived linkage by a steel bridge to Schneiders & Son’s clothing factory to the north from 1919–22. Then in the mid-1930s there was a conversion for the Elfin Cabinet Works, for the making and storage of wireless cabinets. By 1946 there was coffee-mill use, then in the 1960s and 70s the building was a warehouse for Leonard Hamilton Ltd, basket importers. There followed a period of dereliction associated with shopping-centre blight. Tower Hamlets Council gained ownership and was on the brink of demolishing the building as unsafe in 1989–90.4

The Spitalfields Trust stepped in to acquire the building in 1990 and saw to essential repairs. It was sold on to Ballymore Properties Ltd in 1995, the developer being concerned about blight on the Kempton Court speculation across the railway line. The former school, now called Trinity Hall, was converted in 1996–7. The Regeneration Practice, a division of First Architecture, oversaw the work with David Tyrer as job architect. Workshop use had been considered, but plans switched to flats, at first intending fourteen, increased to eighteen by the insertion of mezzanines. There are rooftop gardens, one communal, the other for a ‘penthouse’.5

The south (Winthrop Street) front of the former LCC Board from a digitised colour slide in the Tower Hamlets Archives collection: 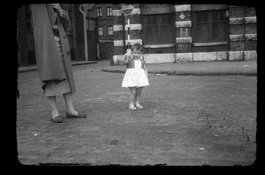