Booth House
Back to Map

From 1614 this was the site of a parish burial ground and almshouses (described elsewhere). The workhouse was replaced in 1860–2 by an imposing row of thirteen shophouses (later Nos 151–175). This four-storey speculation by John Hudson, an architect based on Leman Street, was with its Italianate stucco dressings an exceptionally unified development for Whitechapel Road.1 Only the western end survives, as 151 Whitechapel Road.

The terrace was largely vacant and ruinous in 1947, having suffered war damage. Proposals for a Salvation Army hostel on the site were put forward in 1961, the adjacent site (Victoria Home, 177 Whitechapel Road) having long since been a Salvation Army hostel. H. & H. M. Lidbetter, the Army’s usual architects, prepared plans and the building was erected in 1965–7 by Walter Lawrence & Son Ltd, and opened by Queen Elizabeth II in 1968 as Booth House Hostel, the Salvation Army’s first purpose-built hostel, named after its founder, William Booth, and said to be the largest hostel for men in London. The six-storey and basement building, with a four-storey rear wing, has a reinforced-concrete frame, originally articulated with brick-panel cladding. There were 252 cubicles, mostly single rooms, a few double, off spine corridors with communal washrooms/WCs. On the ground floor a canteen and lounge flanked the entrance foyer, with offices and the kitchen to the rear. The fourth-floor had dining, sitting, reading, TV and smoking rooms, with a sun lounge and roof garden on the rear wing.2 From early on there was a rehabilitation unit for drug addicts and alcoholics in the basement. In 1971, with most of the residents more or less permanent, accommodation for men remanded on bail was introduced into Booth House, principally to protect those not previously held in custody from others who had been. This initiative was sponsored by the Xenia Field Foundation as a social-welfare experiment to meet a ‘particular need for a bail hostel for young men who drifted into London, got into trouble of a not very serious kind, and had to be remanded in custody because there was nowhere else for them to go.’3 It helped lead to the sanction of public funding for bail hostels through the Criminal Justice Act of 1972. Alterations to the fourth floor of Booth House in 1973 formed Rawson Home, accommodation for about forty elderly residents.4

Booth House was thoroughly refurbished in 2000–2 for the Salvation Army Housing Association, Mansell PLC being the client and involving Fraser Brown MacKenna Architects. Interiors were converted to provide en-suite accommodation for 150 men, with shared kitchen/diners and tearooms on all the upper floors, the canteen continuing on the ground floor. The building was refaced with a steel-framed screen, supporting brick panels in a wholly new fenestration pattern, and the rear wing was extended and raised. The Salvation Army stopped using the term ‘hostel’, seeing it as carrying negative connotations, preferring Lifehouse. The hostel closed in 2018.5 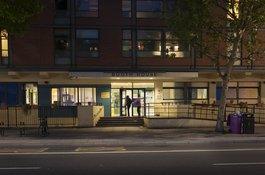 Booth House, entrance in May 2018
Contributed by Derek Kendall 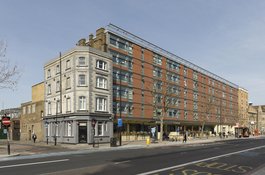 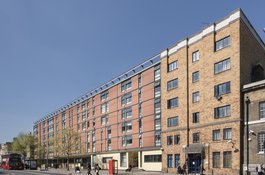