12 Brick Lane
Back to Map

c1955 flats on a frontage first developed in the 17th century, restaurant of c1999

Harun Quadi takes on the Bengal Cuisine
Contributed by Survey of London on May 15, 2018

Harun Quadi settled in the East End in the early 1980, having originated in Comilla, Bangladesh. In the 1990s he took over the Bengal Cuisine at 12 Brick Lane as his first restaurant venture.

"Surprisingly, this building [was] a laundrette in 1989. One of my predecessors [was] a Bengali gentleman, he made it a self-service laundrette. Upstairs was two flats.

Then 1992, he transferred it to restaurant down below. Due to some reason he had to go to Bangladesh. He left it to his another friend who sold it to a friend. This friend is only running for about one year. After one year he could not run. He's saying that, "It's difficult for me, I cannot run". He wanted to sell it. He tried to sell it and finally could not sell it to anybody and he came to me and said, "Whatever the price you give, I'll take it. You take it over. I cannot give all the outgoings”.

I gave him small amount of money, £2,500, to take the possession of the business [in 1993]. He had outgoing debt, outstanding rent and he had all other lot of things outstanding. I took the responsibility of paying all these things. It was [named] Bengal Cuisine at that time.

Though I was not a restaurant runner or restaurant worker, I kept it running as a restaurant. I employed people there. Surprisingly, after I have arrived and put some effort on it, the restaurant started doing good business.

About 2002 and 2003, I made another refurbishment of the restaurant by a German architect. She was good architect. Then business was good and we had a grant for £15,000 to do the front of it, again, from the City Challenge. That helped us to improve the place.

I accepted her idea though it was risky for me. It was my final financial risk that is her idea. I took the financial risk, but it worked out well. People started liking it. Lot of people came down, enjoyed the food. I found out many other people followed me as well.

Upstairs I left it as flats. I leased the building, at the beginning, for 20 years. Then I took it for 30 years.

Then in 2002, in first and second floor, I had a college here. I took D1 permission from the council. Then we used it until 2010 throughout, as D1 permission.

It was a college for doing diploma and higher diploma, College of Further Education. It ran for 10 years which is-- We help a lot of people. Students, especially the students come from abroad and they could not afford university fees.

This first floor and second floor was classrooms. The university fees was very high, £10-12,000. We could afford to get students for £2,000. That's why you got lot of students from abroad they brought. I had here about 100 students.

After my college grown bigger, then I rented another place where we did have 600 students. We ran it for two years there and after that the policy changed in England and English policy doesn't allow students to come abroad for small colleges like this. At the same time, it doesn't allow to work here as a student, a foreign student, so students lost interest, they didn't come anymore. [Then] I let building as flats.

City people used to come all the way from Broadgate to Brick Lane. They were passing through Spitalfields Market. On their way, there's plenty of beautiful new restaurants, all times, and cheap and expensive, all kinds of restaurants. There's a lot of temporary restaurants there. They do not have any big overhead and they just open up every day. They give food very cheap.

[Now we are thinking about] how to change to the modern atmosphere. We are losing every week, every day, but time to adapt.

[The Sonargam restaurant further down on Osborne Street] could not afford their rent so they said, "Okay, we'll make one restaurant [with you]. Two restaurants in one". They had some buffet customers who came down to them. They joined us [and set up] a buffet thinking that first and second floor will be part of the restaurant and because it has got D1 permission we can congregate people there, but not to cook. Cooking is done below.

I can see, every time new immigrant come in the country, they bring their culture and food with them. So many Indian came last 10 years, especially European immigrant, they have opened their food businesses. Any immigrant comes in new country, they can do only a business which is food, because they eat themselves and they sell it to others also.

It's easiest. That's why there are lot of choice, various choices. Asian, European food in UK now. Indian restaurant, by comparison, it's going a little down. We are in a position that we're getting hardship to cope with it. 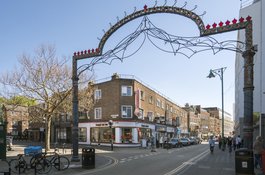