30 Whitechapel Road
Back to Map

The Universal British Directory lists William Mears, bellfounder, at 32 Whitechapel Road (formerly no.267) in the late eighteenth century. Next door, to the west, at 30 (formerly no.268), was George Wolrath Holzmeyer, sugar refiner. He'd had his business there since 1779, having previously refined in Wellclose Square. He died in 1799 leaving his three daughters well-provided for. His young son was left the business, sugarhouse and utensils of trade. When the younger Holzmeyer came of age he too became a refiner but not at these premises. In his will Holzmeyer the elder described the property as a 'sugarhouse and dwelling house'. We can assume the dwelling house fronted Whitechapel Road and the business was located to the rear, accessed from Fieldgate Street and Plummers Row, giving rise to the various addresses given for the business. Refining was continued by William & Joseph Wilde to around 1812, then the business was taken over by John Henry Wagentreiber who traded to about 1826. 1

Two eighteenth-century houses on the site of Nos 28–30 had a yard that turned east to extend to what is now Plumber's Row. There was a  sugarhouse there from around 1736, first run by John Brissault, then by James Lewis Turquand from about 1765. It passed to George Wolrath Holzmeyer in 1779, and then in 1799 to William Wilde, who, it appears, had by 1805 built a new sugarhouse on a larger and deeper rectangular footprint on the site that was later that of the Whitechapel Bell Foundry’s back workshop where a vault survives, possibly connected with the sugarhouse. John Henry Wagentrieber ran this sugarhouse by 1812 up to about 1827 after which it may have been demolished.1

On the roadside a replacement pair of shophouses was built in 1846 for John Turner, by Little and Sons, local builders at Size Yard. The first occupants of the shops were William Platt, a cabinet maker, and William Hooper, a butcher. In the early years of the twentieth century Morris Datzkovsky & Co., wine merchants, and William Minn, ironmonger, were here. Buck & Hickman Ltd, toolmakers, had No. 30 by 1928. The premises were listed in 1973, but had fallen into a state of dilapidation by 1980, No. 30 gutted internally and shored up at the front by 1991. The owner, K. S. Sidhu of Kay Textiles and Kewal Investments, agreed a refurbishment scheme, his architect being Peter Black of Scott Brownrigg & Turner (later the Barlow Black Partnership). In the event Black oversaw complete rebuilding in 1997. 2 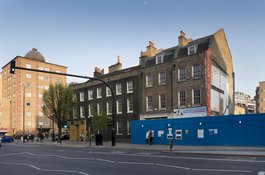