The Brown Bear, 139 Leman Street
Back to MapContribute

Brown Bear Public House, 139 Leman Street
Contributed by Survey of London on May 10, 2019

This establishment moved from Hooper’s Square where it had been by the 1740s when there was an associated brewhouse, later swallowed up by the Rohde sugar refinery. It may have presented dramatic performances. The pub was on this Leman Street site by the 1780s with John Carter as its proprietor, holding a lease from Samuel Hawkins. Samuel and Joseph Tickell, the Castle Street brewers, gained possession and Joseph was given a new lease in 1836 by Benjamin Cotton, promising enlargement and improvement. Rebuilding ensued in 1838 and William Pile was the first proprietor. The pub’s four-bay stock-brick façade has a giant order of stucco pilasters, not extended over Mill Yard Passage. The ground-floor fascia retains its own pilasters with floreate capitals, and there are brick jack arches on iron joists over the passage.1

Around 1845 Pile was succeeded by William Brand who renewed the establishment’s music and dancing license. The pub was extended to the rear in 1850 for John A. Furze of St George’s Brewery for what may have been a concert room below a club room. Joseph Kirk of Norton Folgate was the builder. In 1859 Brand was succeeded by Henry Dittmar, followed by other proprietors of German origin up to 1911 under Furze & Co. and then Taylor Walker & Co.2 The ground-floor interior was thoroughly refitted in 1927 to plans by William Bradford & Sons, the builders being William Shurmur & Sons Ltd of Clapton. It was altered in 1963–4 for Ind Coope to open up what had become the dining room and club room to the rear to be part of the public bar. There was another internal remodelling in 1990 for Taylor Walker.3

From an undated colour slide in the collection of the Tower Hamlets Archives: 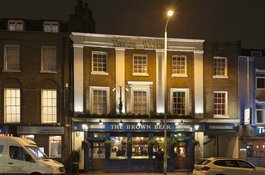 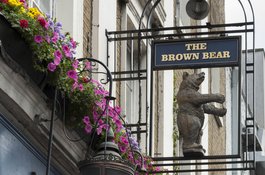 The Brown Bear's facade in 2017
Contributed by Derek Kendall 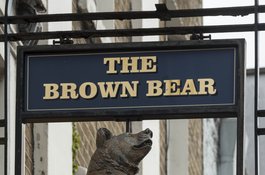 The Brown Bear's sign in 2017
Contributed by Derek Kendall