The Loom, 101 Back Church Lane
Back to Map

The Loom is a converted wool warehouse of 1889–90, bounded south and west by the then newly made Hooper Street and a straightened and widened section of Gower’s Walk, outcomes of the construction of the Commercial Road Goods Depot. The site had been the southern part of a late eighteenth-century parochial burial ground, built up after 1800, Harris’s Yard with a mission hall, and a long-lived animal-charcoal works. The warehouse was built for Browne & Eagle, wool merchants, a firm founded around 1840 by George Elliot Browne (1807–1853), who was joined in partnership about 1846 by George Christopher Eagle (1826–1873), from Mile End. After Browne’s death, Eagle married his widow and built up the business from a base in the City, importing wool from Australia, and from 1864 taking and building warehouses in Whitechapel. The firm continued to expand after Eagle’s demise, locally and otherwise, up to and beyond the building of these premises on Back Church Lane, Whitechapel’s only surviving wool warehouse.

Holland and Hannen, generally employed by Browne & Eagle, were the builders of what was originally a five-storey building in five fireproof divisions or ‘risks’, each with its own central loophole bay on both east and west sides. In 1897, Browne & Eagle Ltd built an even larger warehouse on the east side of Back Church Lane, for which Edwin A. B. Crockett (1835–1915), then Surveyor to the Fire Offices Committee, was the architect. He claimed to be following principles adopted in the earlier building, for which he was perhaps also the architect. The two warehouses were connected from the south end of earlier building’s east side by a tunnel and three iron footbridges, removed in the 1960s. The London Hydraulic Power Company’s high-pressure mains powered the wall cranes until 1903 when electricity took over.1

Browne & Eagle Ltd had vacated the west-side warehouse by 1952. It was a headquarters for Augustus Barnett, wine merchants, from about 1970 till the late 1980s, after which the building, by then known as Old Loom House, was used as office space by, inter alia, gift retailers and creative enterprises including David Raphael Management, Stuart Batley Photography, the Independent Theatre Council, and Paris Records. The building was acquired around 1987 by the Berkley Group, established by Graham and Brian Meehan in 1977 to convert neglected buildings and then expanding into grander projects. The warehouse was formally converted in 1988–9 with a full storey and an attic added and a central light well inserted for fifty-six office units. A canopied entrance on Back Church Lane declared the building to be New Loom House. Occupants included financial services and technology companies and health charities. The building was acquired by the Yianis Group with a view to conversion to flats but was sold on for £35m in 2013 to Helical, another developer, which elected to refurbish the building as offices, work seen through in 2016–17. Some tenants remained, including an original occupant, the Lloyd’s brokers Corrie Bauckman Batts, but the design-conscious renovation by Duggan Morris, architects, reflected a shift back towards the creative industries, if not to the bohemian character of the 1980s, with fewer units and higher rents. Widened entrances, with distinctive 12m sliding panels in strips of woven steel, like ‘the reed-frame of an historic loom’,2 were formed on both main elevations and linked by the Walk, a passage with bespoke mild-steel panel lining and a polished concrete floor. A further sheep-themed artwork adorns one wall of the enlarged light well which has landings railed with similar woven-strip steel balusters. The Back Church Lane reception area opens into a large café, initially a branch of the cyclist-friendly Look Mum No Hands! replaced by Hermanos in 2019.3

Foot-boards at the Back Church Lane wool warehouses
Contributed by eric on Nov. 1, 2016

Many of the great warehouses around Aldgate and the river had sets of double opening doors aligned up their frontages, and with a wall-mounted crane at the top somewhere. Of the warehouses that survive in Aldgate at 2016, some still have these. Beneath each pair of doors was a wide board that could be swung down and out to form a sloping foot-board at about 20 degrees to the horizontal, and which was kept in check by chains either side. The purpose of this was that an operator could use the crane to grab a bale of wool from inside the building, and this could then be swung out to be lowered to carts waiting below. By placing one foot on the foot-board, the operator was better placed to lean out and look down to see where his load was going, and to signal to the cart personnel beneath him. As a child I saw this happen often: a health & safety nightmare! Another sound that has never left me is that of the hooks biting into a bale as they were lifted. In recent times I have visited a warehouse in Back Church Lane being used by a modern business, introduced myself, and asked to see one of these sets of doors from the inside. I met a chap who turned out to be interested in the history of the area, and we exchanged knowledge, and I obtained some early pictures of solid- tyred vehicles used for moving bales of wool.

I walked past the Gowers Walk side of this building as a child at weekends in the 1950s. The brickwork was intact, but a bit dowdy and dirty. At that time it was occupied by and used by Browne & Eagle, who used it for assessing bales of wool, and storing them. It is said that the wool was of high quality, and some was Merino. Strong hearsay has it that a lad who lived in Gower's Walk before my time used to scale the drainpipes on this building, stand on the roof a bit, and then come down. He was described as 'a broth of a boy' by his scoutmaster. 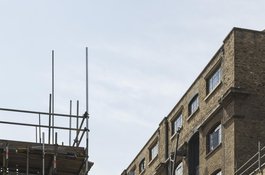 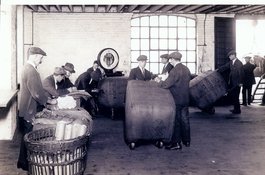 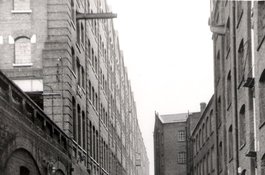 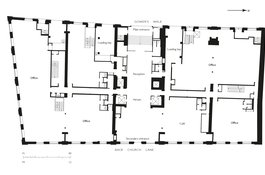 The Loom, ground-floor plan in 2017, drawing by Helen Jones adapted from Duggan Morris
Contributed by Survey of London 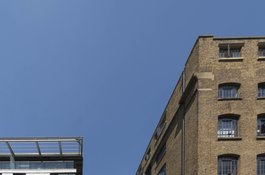 Gower's Walk from the south in 2017, the Loom to the east
Contributed by Derek Kendall 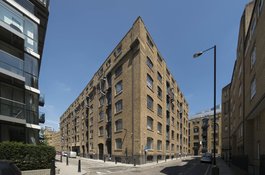 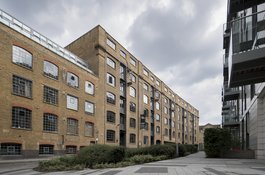