30 and 30a Commercial Road
Back to MapContribute

The first buildings here were speculative shophouses put up by James Morter in 1876–8 as a plain and rectilinear, four-storey, white-brick trio, Nos 30, 30A and, to the west, No. 30B, each three windows wide with continuous reconstituted-stone window heads and short courses of red brick. These premises saw varied use, including as coffee rooms at No. 30, rag-trade manufacturers and wholesalers coming to dominate from the 1920s.1

Nos 30 and 30A collapsed following a fire in 2007. Crown Choice Developments Ltd proposed a grossly bulging twenty-five-storey glass tower for the whole site in 2012, to designs by Llewellyn Davis Yeang, architects. This was precluded by the constraints of the small site, hemmed in as it is by Aldgate Place, Altitude Point and Riga Mews. After selling No. 30B, Crown Choice secured permission in 2015 to build the relatively small-scale six-storey block of flats over shops at Nos 30 and 30A, to designs by 21st Architecture Ltd of Goswell Road, somewhat echoing its predecessors with stock-brick facing above a two-storey grey-brick plinth. No. 30B was demolished in 2018 and replaced to designs by Claridge Architects for Nichols Developments Ltd of Harlow with a seven-storey slip of a building, flats over a shop.

The two projects went ahead collaboratively in 2019–20, with Reddington Construction Ltd handling the whole site. Entrances to the residential storeys are from Buckle Street, to which the flats have enclosed balconies or ‘winter gardens’.2 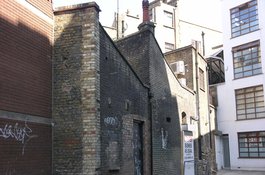