53 Gower's Walk
Back to Map

1994–5 Postmodern terraced house in red and stock brick, site of the entrance to the yards of T.M. Fairclough, hauliers | Part of 43–58 Gower's Walk

As I walked it, ran it, cycled it, the Gower's Walk that I knew in the early 1950s was structured as I now describe. It runs roughly north/south and was cobbled throughout. The eastern side of Gower's Walk consisted roughly of three parts.

The top third, right up to Commercial Road, was ‘commercial’ and belonged to Faircloughs, the meat transporters. Mostly there were very tall brick walls, that had Fairclough loading/garage bays behind them, but in the middle of these was an entrance to the Fairclough yards [on the site of 52 and 53 Gower's Walk], with a long on-high narrow office where arriving vehicles could be ‘clocked in’.

This is about the previous property at 49 Gowers Walk, not the one present in 2016. When my family lived there in the 1940's and 1950's, the two flats had fireplaces, but nowhere to store fuel.

Our flat, at the top of the building had a small spare room between the two bedrooms, all three rooms backing on to the Albion Soap factory next door. We had to keep our coal in that. Our coalman was not happy to lug bags of coal up two flights of stairs, and because the floors had wood-worm we had to buy little and often. When my half-brother left the RAF after the war, he and his new wife were desperately looking for somewhere to live, and we could only offer to clean out our 'coal-hole'. Their faces gave their reply.

These are eighteen two- and three-storey houses that were built in 1994­–5 by the Mitali Housing Association, founded in 1985 to assist local families of Bengali origin, as the social housing portion of the development also at 109–129 Back Church Lane. The facades have a postmodern character in their use of red and yellow brick patterned to echo parapet gablets in front of monopitch roofs. The Gower’s Walk and Mitali Passage houses occupy a site that had included, from the south, Webb’s Place, cleared in 1937, a yard at No. 47 that was a cigar-box makers in the 1880s, later a builder’s store and sawmill, and a row (Nos 50–58), probably some of Joel Johnson’s eighteenth-century houses. By 1896 these were in the ownership of T. M. Fairclough, a haulage firm that occupied the yard behind, and which replaced the row in 1932. No. 49, a gabled red-brick three-storey building of two flats over an entryway to a small yard that came to be used by Faircloughs, had been built in 1906 as the delivery entrance and caretaker’s flat to the People’s Arcade. It had an improbable afterlife in 1984–9, as Exhibiting Space, a gallery that presented exhibitions, practical and theoretical workshops, lectures and recitals. It sought ‘a critical articulation of verbal and non-verbal signifying practices’ to ‘strategically privilege the productivity of irreducible plurality’.1 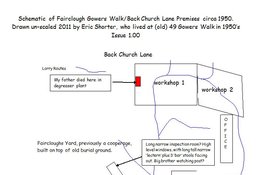