Photographer David Hoffman lived in Whitechapel for fifteen years from 1970. Through this period he saw the area change as he lived in several different places, and he observed and documented the squatting movement at close hand. Some of his photographs and recollections are presented here as a major exhibition of his work opens this month at Gallery 46, 46 Ashfield Street, London E1 2AJ. 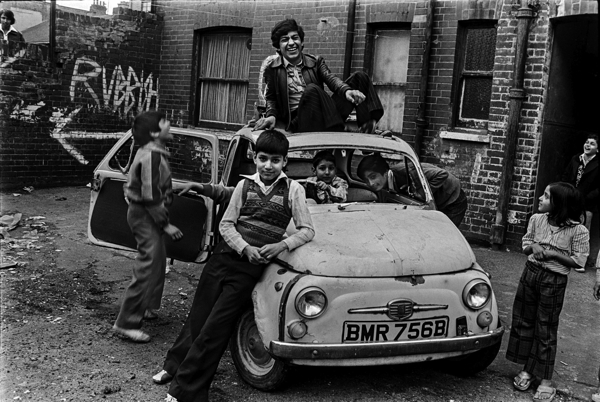 "I moved in there [Fieldgate Mansions] in 1973. There were lots of squats, I was quite involved with the squatting movement so we would go around generally opening places up. The council would board them up and move people out, and then we’d move in and take them over and put families in or friends in.

A friend of mine, Terry Fitzpatrick, was quite an important part of that – he started the Bengali Family Housing Association Group, I may have the name slightly wrong but it was something like that. And we were putting Bengali men with their families into squats as we opened them up. I mean there were no Bengali families at all in that area, there were a few along Old Montague Street when I first moved in, in some very shambolic buildings. But then more of them came over, brought their families, and Fieldgate became very Bengali. 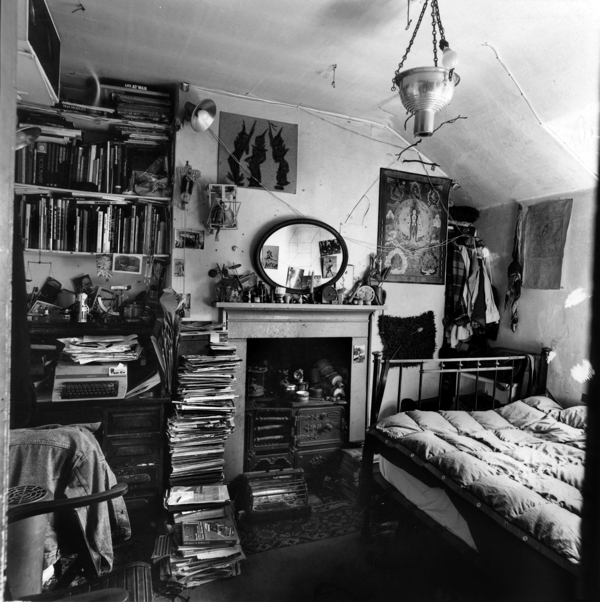 David's bedroom and office in Fieldgate Mansions, tenement blocks of 1903–7  due to be demolished in 1972 but preserved by squatter occupations      © 1983 David Hoffman

[It was] very secular then, there was no mosque of course, and I mean the women would just be out on the street, chatting, no headscarves… and it’s become much more, well very, very dominated by the mosque now. It was much more integrated then. We’d have a cup of tea with them, chat about the problems with the building, kids would play outside, very much freer.

Before I moved in, it was pretty much all white. Not entirely Jewish by any means, probably 30-40 per cent Jewish by then. But there were Irish, there were Maltese. All sorts of people that had a crappy council tenement flat. The whole of that area was council. They were trying to decant everyone, they were trying to knock it down and build I don't know what. Lovely buildings, they were beautifully built, lovely brickwork.

They would come in with a council team, and they would put a sledgehammer through the lavatory or pour cement down it. Put a sledgehammer through the window, rip out the wiring. That’s what the council would do. They would move whoever was there out to some probably better, well it would have to be better place, and they would make sure it was really unoccupiable. And then we’d go in, take out the lavatories and put in new ones, take out the windows and put in new ones, rewire it. It was a lot of work. They wanted to keep it empty, so they could eventually have an empty place that they could demolish, and we just stopped that for about ten years and by then the demolition wasn't possible. 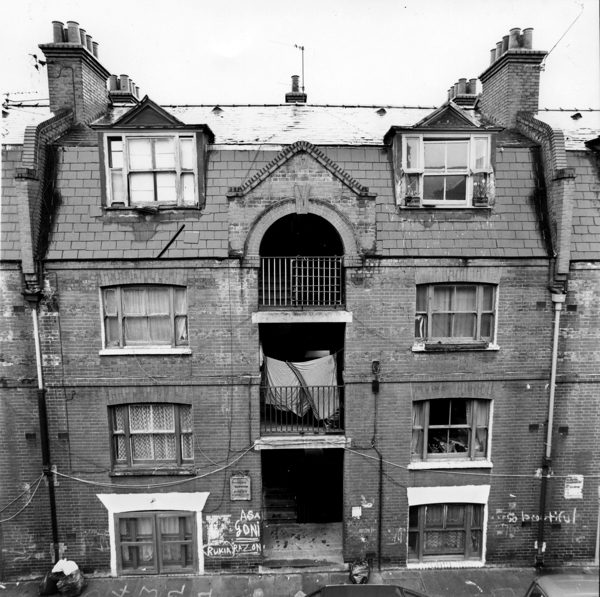 The east side, the block on the furthest east of Romford Street, was I think owned or sold, or given to or let to the hospital, so the whole of the east side was medical; nurses and students or doctors. But the block on the west side of Romford Street and the east side of Myrdle Street, they were Tower Hamlets, later became GLC and then they became [housing association],  they were all fully squatted. When I left they were probably 50-60 per cent Bengali and the rest were students from London College of Furniture, there were jewellers, there were artists, there was a guy running a bicycle-repair shop in a basement. 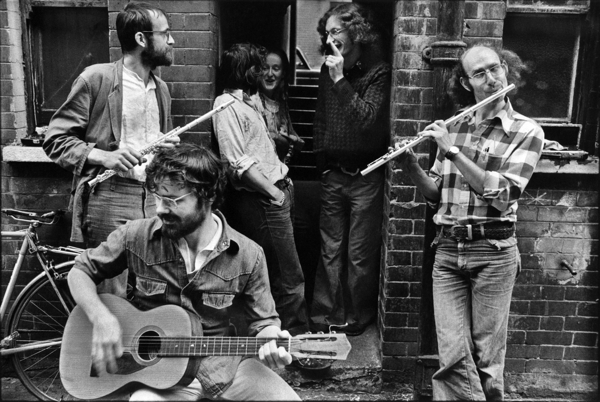 Tower Hamlets, the council, was very discriminatory. It was a liberal council at the time, but they had this father and son policy or friends and family policy or something like that, but if you had no white grandfather, you were stuffed. And then they started moving Bengali families, well if you were a family they had to put you somewhere, but they were really shitty estates. I remember when they moved the first Bengali family into Clark Street, which was quite a reasonable estate, and the night before they were due to move in somebody daubed ‘No Paki’ about forty times in massive letters across the front of the house, nailed a pig's head to the door, I got pictures of that. And they were attacked. Presumably young Bengalis were attacked a lot. Of course then most of them were first-generation Bengalis here, and they were not big and strong so most of them were pretty easy prey for racists. 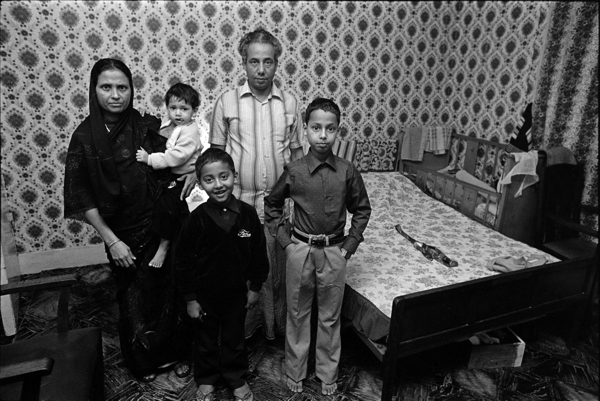 It led to one of the biggest mistakes of all I think, which was to put the Bengali families into ghettoes, to keep them together, because they felt safer together and they had less harassment. But it meant that there was not integration. I think the Bengali families themselves wanted to be near other Bengali families – language, food, culture, protection, all those reasons, very understandable. But it led to prevention of integration. Clark Street Estate became pretty much purely Bengali.

Fieldgate was very mixed and very open, until the mosque really came to its strength. I was there while they built it. The synagogue was still working, and there was a little temporary mosque in a Portakabin type thing, and this big open area, bombsite area, and they were raising money for the mosque and there were signs up saying we need this money that money. And then they started the building project, and we were pretty amazed at the size of it. 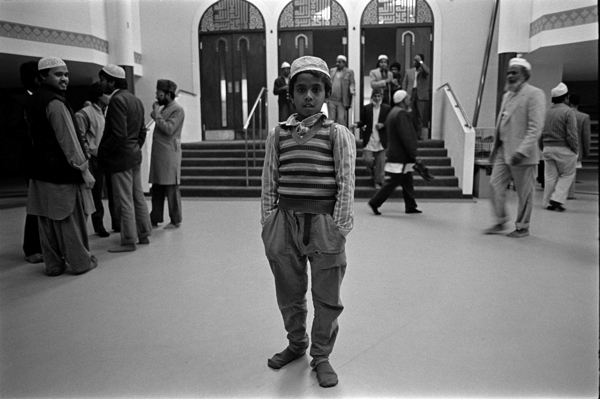 Over 1970–84 [Whitechapel] really changed, it was the period that it really changed its nature. It was the march of the City is how I saw it, because there were none of those big flash buildings. When I was first there we still had, I don’t think it was trading anymore, Gardiner’s Corner… I remember going down to look at the fire when it was blazing. I was standing the other side of the street by Aldgate East Station, and it was just too hot, we had to move away. And the sign outside the tube saying Aldgate East was melting, the plastic was buckling. I’m sure it was arson, the whole thing just went up. There was a lot of arson around then, around Butler’s Wharf, where the land was clearly more valuable without buildings on it, but they were all listed.

There were loads of empty sites. It had been pretty worthless, nobody wanted to live around here, there was no trade around here, no income, it was pretty much a wasteland. It was fairly busy but very, very derelict, very impoverished." 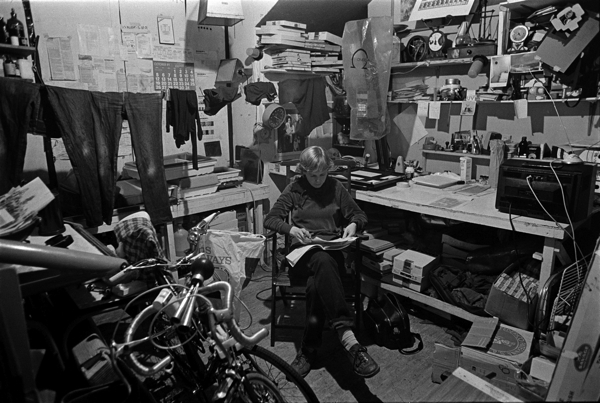 David Hoffman's work can also be seen on his website at www.hoffmanphotos.com