48 Gower's Walk
Back to MapContribute

No. 48 is the sole building on this stretch of Gower’s Walk to survive from before the 1990s. It is plain, of four storeys, and in stock brick with minimal red-brick dressings and a two-storey extension. It was built in 1924 by West End protagonists, Stanley Whiddington of Berners Street acting as agent for the owner, A. C. Rickatson of Ridinghouse Street, with Augustus E. Hughes & Son of Mortimer Street as architects, and Townsends of Dean Street as builders. Early occupants were the Albion Soap Company Ltd. Eric Shorter, who lived next door in the early 1950s, has recalled in a contribution to this website that ‘it triple-milled laundry soap and the smell was awful’. Thereafter there was use as a jewellery factory and gown wholesalers. The building was converted to flats in 1997.1

I lived at no. 49 Gower’s Walk in the early 1950s and no. 48 was a soap factory at that time. According to Trade Directories, it was owned by the Albion Soap Company. I remember the name now. Dirty windows, impossible to see in. Later it was used by a firm of meat importers and meat distributers (think it must have been small for that). When it was a soap factory it triple-milled laundry soap and the smell was awful. There were no other habitations at that time, and my bedroom window looked out front to see the immense Tilbury warehouse as far as one could see in any direction. My father worked for Faircloughs the meat hauliers who had a yard between Gower’s Walk and Back Church Lane, approximately where there is now a tennis court. 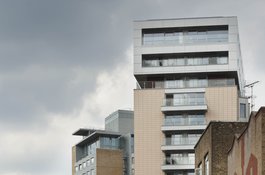