151 Whitechapel Road
Back to Map

1860-2, end house and only survivor of a thirteen-house terrace developed and designed by John Hudson | Part of Whitechapel workhouse and burial ground

An imposing row of thirteen shophouses (later Nos 151–175) was built on the site of Whitechapel workhouse in 1860–2. This four-storey speculation by John Hudson, an architect based on Leman Street, was with its Italianate stucco dressings an exceptionally unified development for Whitechapel Road.1 Only the western end survives, as 151 Whitechapel Road. This began as the premises of Robert Gladding, a bookseller who moved from what is now 203–205 Whitechapel Road (see Bob Gladding's contribution). Edward George, previously a competitor across the road at what is now 104 Whitechapel Road, acquired and sustained the bookshop into the twentieth century. There was a conversion for the Midland Bank, and by the 1930s upper-storey use for millinery showrooms and workrooms. After bomb damage and rebuilding in 1949, the plain-brick formerly top-lit rear wing was raised two storeys in 1984.2

Originally No 76, before the re-numbering of Whitechapel Road, the property was built on the site of the house of the Master of the (Old) Whitechapel Workhouse in 1860-61. The freehold was bought by the first occupant, Robert Gladding (1808-1896), a bookseller whose previous premises were at 97-98 (old numbering) Whitechapel Road. He had the building fitted up with two galleries one above the other, and as such it was described 'as one of the most admirably arranged bookstores in the country – not unlike a miniature British Museum Reading Room' 1

Robert Gladding was a publisher as well as bookseller. His obituary in the East London Observer described him as ‘the Grand Old Man of the East End’ and ‘the Father of Whitechapel’ because of his public service over many years as Chairman of the Whitechapel District Board of Works and a Guardian of Whitechapel Workhouse. 2.

On retiring around 1893 he sold the book business to his competitor Mr E. George on the opposite side of the Road at No. 231 (old numbering), but the freehold was retained in the family until 1940. In recent years the building has housed an Asian textile business. 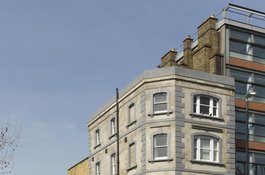