7-8 Davenant Street
Back to MapContribute

This unprepossessing and much-altered building had its origins as a sugarhouse and was thus until its demolition in late 2020 the sole surviving remnant of a once widespread building type in Whitechapel. It was built in 1797–8 for James Ballenger and was originally taller, as sugarhouses usually were. Ballenger was the eldest son of Robert Ballenger (d.1801), a Roman Catholic sugar refiner whose premises at Star Court on the south side of Old Fish Street in the City were sold in 1797. That probably facilitated the move to Whitechapel, to a site immediately east of another sugarhouse – that built by Paul Turquand, which had come into the proprietorship of William Coslett. The surviving building is a simple brick block with a tall basement, square on plan with four bays of window openings on three sides, to the front, back and on the south flank. Sugar refining continued under other proprietors after Ballenger died in 1830, but the building was converted in the 1840s, Rayden Gower being the landlord to Brown & Co.’s chicory factory. A serious fire in 1848 caused upper parts of the building to collapse, also damaging adjoining properties.1

A two-bay house of around 1800 abutted Ballenger’s sugarhouse to the north. Land to the rear was adapted to use as a slaughterhouse, held by Abraham Saul Rodrigues, a shoemaker become a butcher, who had a shop at the site of 115 Whitechapel Road from about 1781 to his death in 1816. Perhaps Rodrigues was providing for the kosher requirements of Whitechapel’s already substantial Jewish population. These premises extended behind the sugarhouse and had become a dye-works by the 1840s.

Reduced to three storeys after the fire, the former sugarhouse was adapted to be a clothing warehouse with a carriageway through its south side. It was unified with the former dye-works site by wholesale clothiers, namely S. Schneiders & Son around 1870, and Hyman Lotery around 1890. Lotery substantially rebuilt the warehouse in 1894–5 and raised it a storey in 1901, George Cambray being his builder. The lower-storey walls of the former sugarhouse appear to have been retained, along with several iron tie-bars, perhaps from 1848. Window openings had been enlarged, and there was rusticated rendering of the basement and a pediment over a central fifth opening on the raised ground floor. Durham Brothers’ Atlas Foundry in Bow supplied hollow- cylindrical cast-iron columns and a dogleg staircase was formed in the north- east corner. In the 1970s the brick walls were entirely concealed by white render. Loterys held on here into the late twentieth century. The enduring front block was converted in 2007–8, in part for educational use, Avon College operating from the property, which has otherwise been subdivided into small lettable units. Redevelopment of the site as a five-storey and attic block, also with an extra storey on No. 9, altogether owned by Aldgate Properties (UK) Ltd and Unicastle Ltd, began in 2020 to form 36 apartments to designs by Synthesis Architecture that were carried forward by Met Development Design and Build and Firm Stand Ltd.2 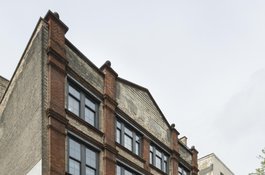