9-13 Osborn Street
Back to MapContribute

Osborn House is a two-storey and basement workshop–showroom building on the site of three shophouses of 1848–9 destroyed in the Second World War. It was built in 1951 for M. E. Goldstein, whose firm, M. A. Goldstein & Sons, Clapton textile merchants, occupied the ground floor until the 1970s. The architect was W. J. Hughes of Mill Hill, the builders T. Whyman and Son Ltd of Hackney.1

By 1959 the basement was in use as a recording studio, first by Southern Cross (Africa) Ltd, and from 1960 to 1972 by City of London Recording Studios, specialising in radio recordings and newsreel voiceovers. Lulu was spotted here in 1963. A place in the moshpit of rock history was ensured by subsequent use. In 1973 a new recording studio, Sarm (from Sound and Recording Mobiles, as the owners had previously run a tape-copying business), opened under sister and brother Jill and John Sinclair, with Mike Stone and Gary Lyons as engineers. Sarm’s sophisticated (24-track) equipment attracted musicians and producers. Much of Queen’s albums A Night at the Opera and A Day at the Races of 1975 and 1976 were mixed here, including the technically ground- breaking single, Bohemian Rhapsody. Trevor Horn, the bassist and producer who achieved fame through the Buggles, was another habitué. After he married Jill Sinclair in 1980, many more hit singles and albums were produced here by, inter alios, Yes, ABC, Frankie Goes to Hollywood and the Art of Noise. Sinclair and Horn acquired a west London base in 1983, but kept Osborn House as Sarm East until 2001. The basement studio then became an audio school and facility called the London Recording Studios, later the London Music School, but the building’s connection to music ended in 2015.2 Upper floors have been variously used since the 1970s as a hairdressing salon, lawyer’s office and, most persistently, an accountant’s.3 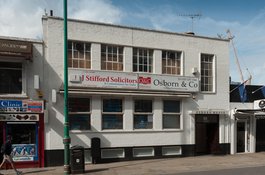