7 Osborn Street
Back to Map

Nos 5 and 7 Osborn Street are two survivors from a row of five shophouses that once ran to No. 13, erected in 1848-9 for Richard Carrol Barton (1814–81), a Kennington solicitor, working with Lestock Richard Peacock (1806–66), a Walworth architect. Rebuilding followed a severe fire in 1847 that extended to 75 Whitechapel High Street. No. 5 was a small two-storey eating house that had been absorbed into the coffee house at No. 3 by 1871. By 1911 it housed a printer then, after the Second World War, a Jewish bookseller until 1980 when it became, with No. 3, a men’s clothing shop. It has been a fast-food takeaway in recent years, with a kitchen in a single-storey building to the rear put up around 1950 on the site of 1 Bull Court. No. 7 is the last survivor of four similar three-storey houses, the others destroyed in the Second World War, this one cut down thereafter to two storeys. It was a newsagents for at least fifty years up to 1911, later housing a jeweller. A recent convenience store, with a sideline in travel, especially for the Haj, closed abruptly when the manager and travel agent were convicted in a people-trafficking trial in 2017. No. 7 now hosts a computer and mobile-phone repair business.1 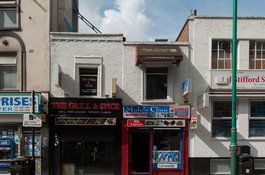