Universal House
Back to MapContribute

Universal House is an office building, its west part a reconstruction of war- damaged remains of Wildermuth House, a model lodging house for single working men built in 1892–3 for Gustav Wildermuth (1835–1898), its east part complete replacement of 1965–6. Wildermuth, German-born and naturalized in 1874, had been running a lodging house at 31–34 George Yard (Gunthorpe Street) for more than twenty years, but this new building was of a different scale, of five storeys with a frontage of 136ft, and was said to have cost £25,000. It replaced a row of eight houses on Wentworth Street and four more returning to Angel Alley that had been ‘improved’ by the Earl of Pembroke, whose lease expired in 1891. Wildermuth’s George Yard lodging house had a dubious reputation, but his new premises were opened in August 1893 to some fanfare by George Holland, the veteran of the George Yard Mission.1

Wildermuth House was a rugged building of stock brick with red-brick window surrounds, internal iron columns and joists and concrete floors. The four upper floors each held eight dormitories and a central staircase to the rear had open five-foot-wide balconies. The ground floor had a ‘lofty’ kitchen and ‘reading room’, the basement a washing room and laundry, and there were garden seats in a rear yard. Charles Booth’s researcher George Duckworth, visiting in 1898, considered its occupants to be men of the ‘lowest class, vicious semi- criminal’.2 In 1901 it housed 388 single men, and a ‘general provision shop’ had been opened on the ground floor at the west end. Whitechapel District Board of Works had considered acquiring the lodging house in 1899, and in 1906–7 a Mr Kahan proposed adapting the east end of the building ‘for Jewish Immigrants passing from the Continent to the United States of America’. This was not taken up, instead in 1907–8 the Wildermuth family created a women’s section on the first and second floors on the west side with its own staircase; eighty women came to be housed. Wildermuth House remained in the hands of the family until it closed in 1920. No longer fully occupied, it was running at a loss and the LCC identified 900 vacant common-lodging-house spaces.3

The building was sold to A. E. Bosworth, music publishers based in Vienna, with a plan to house printing machinery. Instead it was converted to workshops and warehousing occupied by locally typical textile and clothing trades – tailors, gownmakers, mantle manufacturers, cap makers - along with the New Wentworth Social and Temperance Club, later Social and Bridge Club, on two floors with billiard tables.  The east end was destroyed in the Blitz in 1941, the rest badly damaged. It was repaired in 1947 by Stanley G. Soper, architect, for Bosworth’s trustees, and more fully reinstated in 1955 for a new owner, Philip Goldstein Ltd, by W. Bisset Farquhar, surveyor, when internal stairs replaced the balconied staircase. Textile workshops and warehousing continued under Goldsteins until the 1980s.4

In 1965–6 a new wing was built on the east side, extending across the site of No. 94 (which had housed a tripe dressers since being built in 1893). This range was designed by  Maurice Sanders Associates, architects, and set back from the street with a simple rectilinear façade of exposed concrete frame, brown-brick panels and continuous steel windows.5 Universal House was acquired in 1986 by Gurmeet Mandra who converted it to office use. Recent occupants have included AdviceUK, London Living Streets, which encourages walking in London, Baliga, an Ayurvedic health clinic, and Pristine London, a provider of construction services to developers. Since 2008 parts of the building have been adapted for educational use by the Central Film School and The Complete Works, a school catering for students excluded from mainstream education, also at 38 Commercial Street.6 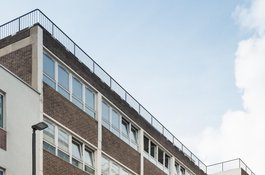 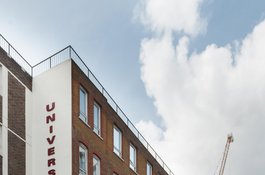