Nos 52 to 54 and 62 to 72 Middlesex Street were built as four-storey shop- houses in 1885-6 by James Hartnoll, better known as a builder of artisans’ dwellings, including the vast Brunswick Buildings in Goulston Street.1 In 1886 Hartnoll advertised them for let as shops with basements and fitted as living rooms above, ‘but could be let for business purposes’, a draw for ‘chemist or medical man, oilman, greengrocer baker, confectioner, butcher, coffee house’, was the presence of ‘one thousand model dwellings within a stone’s throw’, and that approximated the mix of occupants, though in the 1960s and 1970s the rag trade predominated, many replaced by food outlets in recent years.2 In 2010 at the initiative of Jessica Tibbles of the Electric Blue Gallery, at No. 64 in 2009-2014, the shutters of all the shops on the east side of Middlesex Street (16 to 22, now demolished, 38 to 48, and 52 to 72), and four in Wentworth Street, were painted with all 26 letters of the alphabet by the street artist Ben Eine with large colourful graphic letters, a feature that can be seen on shutters all over East London.3 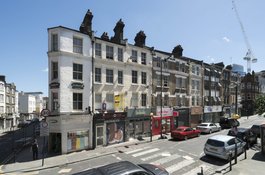 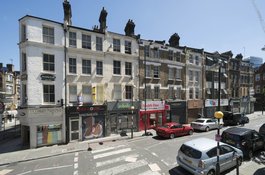 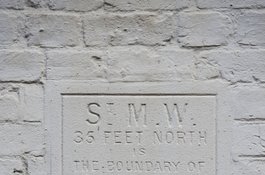 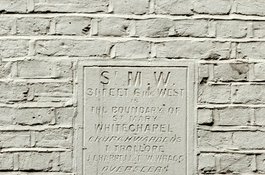