14 Whitechapel Road, including the George public house and the early history of adjoining buildings
Contributed by Survey of London on June 27, 2016

A timber-framed building on this site by the early eighteenth century was the George Inn, which, with livery stables to the rear, was inherited by William Fillingham in 1749. Charles Fillingham was making saddles and harnesses here around 1800, John Fillingham (1763–1817) had the freehold of the house at No. 12, and later Fillinghams continued to make saddles at 8 Whitechapel Road into the 1920s. The George Livery Stables were run by George Starkins Wallis from around 1815 into the 1850s, and then by Charles Webster Ltd up to 1913.

Some of this frontage had been recently rebuilt in 1770, possibly including the site of Nos 10–14. The most westerly house by the rectory was where John Henry Prince, later to achieve modest fame as a Methodist writer, was born in 1770. By 1750 Richard Whiteshead, a coachmaker, was established to the east of the George. He was followed by James Exeter, then William Hammer and his descendants from around 1810 into the 1840s at what became Nos 20–26. The sugarhouse behind the site of Nos 28–30 was first run by John Brissault from around 1736, then by James Lewis Turquand from about 1765. It passed to George Wolrath Holzmeyer in 1779, and then in 1799 to William Wilde, who, it appears, had by 1805 built a new sugarhouse on a larger and deeper rectangular footprint on the site that was later that of the Bell Foundry’s back workshop. John Henry Wagentrieber ran this sugarhouse by 1812 up to about 1827 after which it may have been demolished.1

The pub, called the George and Dragon by 1841, was rebuilt in 1881–2 for Courage & Co. Ltd by Ashby Brothers, builders, and its name changed again to the Old George. But the licence was lost and the premises converted to shop use by 1914; there were partial rebuilds in 1923 and 1927. These were followed in 1934 by the insertion of a two-storey faience-trimmed neon-embellished shop-front, designed by North, Robin & Wilsdon, architects, and made by Crabb & Son Ltd of Tulse Hill. This was for Boris Bennett (1900–1985, born Sochaczewska in Poland), who traded as Boris Studio and became ‘the doyen of Jewish wedding photographers’. 2 The building was acquired by Buck & Hickman Ltd in 1952, when first-floor windows were inserted, and is presently occupied by Haji Nanna Biryani with flats above.

Boris Bennett, photographer, and the later history of the building
Contributed by Maureen on July 28, 2017

Boris Bennett had a photographic studio at 14 Whitechapel Road. He was a Polish Jewish refugee. Couples queued on the staircase and the police had to control the crowds. He sold out to Stanley Kalm's father and it became Currys.

Boris the photographer
Contributed by Joe Swinburne on June 12, 2017 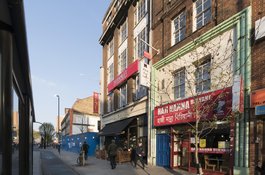 14-18 Whitechapel Road from the north-west, April 2017
Contributed by Derek Kendall