19 White Church Lane
Back to Map

Around 1879 Simon Cohen (otherwise Simcha Beker or Simha Becker), a pastry cook across the road at 32 White Church Lane, adapted a house on the site of No. 19 to be an informal synagogue, a Beth HaMedrash (study circle and synagogue) incorporating the earliest known Mikveh (ritual bath) in Whitechapel. In the early 1880s he also insinuated use as a refuge for homeless Jewish immigrants, a ‘Home for the Outcast Poor’. He named this the Poor Jews’ Temporary Shelter shortly before it was closed down as unsanitary by the Jewish Board of Guardians in early 1885. That closure prompted fundraising that permitted the establishment to move, first to 12 Great Garden Street then to 84 Leman Street. Other premises continued to be used as ad hoc refuges or lodging houses. In late 1885 a Shelter employee took five immigrants from Brest-Litovsk to 11 Church Lane, then occupied by Paul Meczyk, a printer, only for them to be turned out on to the street. Cohen fell out with the Shelter Committee, but secured formal permission for conversion of the house at No. 19 into a synagogue when he carried out further works in 1895–6, acting, unusually in a Jewish context, as his own builder. But this did not last. In 1898–9 Jacob King, a publican at the Windsor Castle on Francis Street in Westminster, redeveloped the site with the adjoining plot at 9 Colchester Street. Arthur C. Payne was the architect and H. W. Brown the builder of a house above a factory and office, brick (now painted) with keystones over the windows and shaped gables, one since replaced. Bender & Co., leather merchants, were in occupation in 1900.1 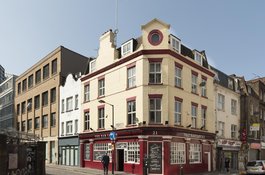 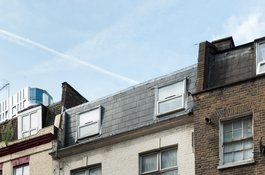