I walked around the walls that once bounded what is now Hooper Square many times as an early teenager in the 1950s. Back then the walls around this space were tall, and held up a set of railway sidings at first floor level. The space enclosed at ground floor level was a dark cavern of railway storage, I think, with a small network of tracks and a few railway wagon turntables. I never saw any of these, but I often saw wagons being drawn from the northern side of Hooper street by capstan haulage, across the road from the ground floor of the great Tilbury Warehouse (Commercial Roads Goods Depot) which ran along the side of Gower's Walk. The space occupied by railway trackwork associated with the Tilbury was a bit larger than the space now shown as Hooper Square, and a large overbridge in Hooper Street topped wooden doors that opened at ground level to let trucks be pulled across the road from one dark cavern to another. On top of the bridge was a fan of short railway sidings and tracks that led into the Tilbury itself at first floor level. The capstans (there were a few) were powered by the Pump House at the western end of Hooper Street.

Before Hooper Square
Contributed by eric on Jan. 15, 2017

Before the building of Hooper Square in the mid-1990s, at least a small part of Hooper Street where Hooper Square is now contained the main façade of the firm of Browne & Eagle, wool importers. This façade was visible when, as a child in the 1940s and early 1950s, I walked down Gower's Walk to go shopping with my mum. When clean, the façade made a pleasant change from the dreariness of Gower's Walk, and I always looked forward to seeing it. I knew that just beyond and above it were the railway sidings leading in to the Tilbury Warehouse.

Hooper Square
Contributed by Survey of London on June 5, 2020

South of Hooper Street late twentieth-century redevelopment was delayed long after the National Westminster Bank had built to the north in the 1970s, probably in part at least because of the costs and technical challenges of removing an extensive array of railway vaults. Tower Hamlets Council had permitted NatWest’s Management Services Centre on the basis that sixty per cent of the larger site would be made available for housing, which imposed a presumed use for the land south of Hooper Street. The Greater London Council was considering its suitability for low-rise housing in 1977 when NatWest appears to have disposed of the property. Development plans did not surface until 1986 when the site’s owners were Countryside Properties Ltd, an Essex- based developer, working here in association with Abbey Housing, part of the Abbey National Building Society. At the end of 1987 permission was given for the erection of a development of 129 flats and maisonettes, studios to three- bedroomed, in blocks of four to six storeys, most arranged in a square around an acre of landscaped communal garden, flanked west by Bowman Mews (named after the sugar refiners on the site) and south by Conant Mews (after the nineteenth-century landowners). The vaults were cleared in 1988 and the estate had been built by 1990.

The architects were Darbourne & Darke. Hooper Square was less ground- breaking than their Lillington Gardens development of 1961–73, but it shares the firm’s emphases on private outside space, variety of outline, intelligent flat planning, and generous landscaping. It resembles more their housing- association estate at Queen’s Road, Richmond, where building began in 1978. Many flats have their own doors to Back Church Lane or Hooper Street, some raised over parking with first-floor terraces. As at Queen’s Road, and as was widespread in the years around 1990, there is a canted corner, to the north- east, which led to the laying out of hexagonal studio flats. The estate is faced in beige stock brick, contextual deference to nearby listed buildings that has not been sustained by newer neighbours. Elevations are simply enlivened with soldier courses and shallow arches of dark-grey engineering brick, and rooflines are broken by small gables. The property market crash of 1989 meant that flats were still being sold, at reduced prices, in 1993. The estate is collectively managed by its leaseholders as the Hooper Square Residents’ Association. Pump House Mews, two two-storey blocks, one of two semi-detached houses, the other of maisonettes, was built to the west of Bowman Mews in 2000 for Hilden Homes to designs by Barker Shorten, architects, effectively completing a subsidiary square the north side of which is the renovated Pump House.1 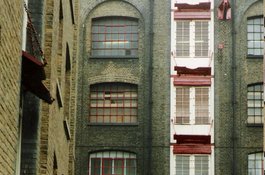