40 Dock Street
Back to MapContribute

In the early 1830s John Hodgson moved into a new sugarhouse at the bottom end of Dock Street.1 As the biggest danger in the trade was fire, this was built to the fire-proof pattern of brick walls surrounding a cast iron frame and pillars. 9 storeys, 5 bays to front, 6 bays to side, small windows with segmented heads and iron glazing bars, thicker walls for the lower storeys.2 - 3 John Harrison took over c1856 in partnership with Wilson for a short time, and then continued by himself through to the 1870s.1

The building was taken over by the Monastery Bonded Tea Warehouse in 1889.4 A fire in 1972 caused serious damage 5, and the building was eventually demolished in 1980-1.6

Around 1830 Thomas Hodgson & Son took over a sugarhouse with premises to its north on the west side of Dock Street, just north of the parish boundary (later 40 Dock Street). Thomas Hodgson was locally eminent, including as an Auditor for the Sailors’ Home in 1835. Another Thomas Hodgson, related to Dr Henry Loades who had a substantial estate in the vicinity from 1655, had been present hereabouts in the 1690s. The sugarhouse had been built around 1800, possibly by Daniel Austin, and an engine house and back warehouse were recent additions. John Hodgson may have rebuilt in the 1840s, but that remains unclear. By this date at any rate the sugarhouse was nine storeys tall. Around 1856 the premises were taken over by John Harrison who had to rebuild the sugarhouse following destruction of all but ‘the bare walls’ by fire in August 1861. At this point, Harrison, two clerks, a German foreman, forty-two German labourers, a cook and a housemaid all lived on the site. The replacement, complete by July 1863, maintained the grand scale, with nine storeys of extremely plain stock-brick elevations, and five by six bays of iron-framed windows. Inside, hollow-circle section cast-iron columns supported timber floors. North of a narrow yard there was a double-fronted three-storey house and office, perhaps of the 1840s. The refinery was converted in 1874–5 for Butcher, Jones & Co. (soon after Jones & Pooler), tea warehousemen, to be the Monastery Bonded Warehouses. With tea above, wines and spirits were stored in vaults and a former engine house. After another fire in 1879 the two upper storeys had to be reconstructed and proprietorship passed to the Monastery Bonded Tea Warehouse Co. Ltd. In 1927 there were 15,462 tea chests here. Other commodities, sugar, biscuits and baled surplus clothing, were introduced in the 1940s and the top floor was again rebuilt in 1956. Tea warehousing ceased in 1970 following closure of the nearby docks. Demolition work in 1973 accounted for the house, but was halted by the listing of the former sugarhouse, wherein a fire promptly gutted the upper storeys, leaving the rest of the building open to decay. It too came down in 1980–1 after a successful planning appeal by the Leopold Joseph Property Co. Ltd. 1

At 24–28 Dock Street a plain three-storey group of shophouses of 1891 stood with a smaller-scale building at No. 30 into the 1980s. The Hearts of Oak public house at 36 Dock Street, rebuilt with No. 38 in 1893–4, remained through the 1990s, interrupting the frontage of a site at 24–34 and 40–42 Dock Street that had come into unified ownership.2 Development plans were approved at the end of 1982 (possibly for Town and City Properties) and five red-brick clad two-storey industrial units initially known as the Turret Business Centre were erected around 1985, their sub-Georgian street elevations incorporating relieving arches. The site was conveniently close to the City, and around the time of the deregulatory Big Bang of 1986 the complex became a telecommunications service, distribution or data centre for Mercury Communications, a company formed in 1981 as a subsidiary of Cable & Wireless to compete with British Telecommunications. Cable & Wireless acquired and replaced Nos 36–38 around 2000, putting up an absurdly neo- Georgian three-storey ‘house’, of brown brick with finicky pedimented openings. Those responsible for this design remain unknown, which is perhaps for the best. Windows elsewhere along the frontage were replaced with louvres. The an-aesthetic not to say insulting approach to streetscape was not accidental for a data centre, a facility where security and anonymity would have been growing priorities. The nature and proprietorship of the site were further concealed after what had become Cable & Wireless Worldwide was bought by Vodafone in 2012.3 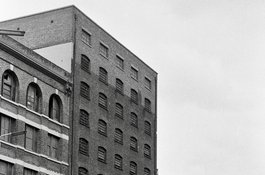 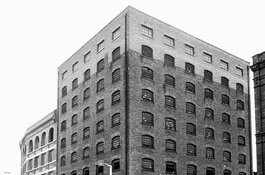 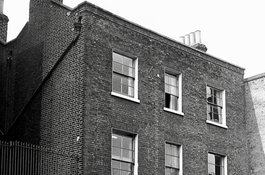 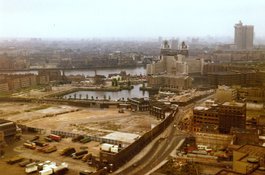