A prominent local business, the Davis Feather Mill occupied a site behind Gardiner’s Corner from the mid-nineteenth to the mid-twentieth centuries. Its collection of factory-warehouses spanned between Whitechapel High Street and Manningtree Street, with elevations to both streets.

The establishment and success of the feather mill can largely be attributed to one man, Isaac Davis, born in Whitechapel in Catherine Wheel Alley in 1830, his father a Jewish feather merchant. Davis’ close personal acquaintance with the difficulties of life in nineteenth-century Whitechapel spurred him on to enter into an apprenticeship with a London-based cigar manufacturer, which was followed by a period working in American cigar factories. He returned to Whitechapel in 1856 with money in hand and the ambition to reform and expand his father’s East London business in order to bring the high-quality feather beds of the rich to within reach of the poor. He set up shop at 63 Whitechapel High Street in the same year. The young entrepreneur began by importing vast quantities of feathers from around the world in such a way as to dominate the market. He then innovatively deployed steam technology to clean the feathers, and shrewdly purchased second-hand feather beds for rehabilitation and upgrade. He was reported to have caused ‘something like a furore’ on account of the low prices of his goods. By 1890, Davis effectively monopolised the feather-bed market, having also diversified into quilts, rugs and other household furnishings.1

The transformation from humble family business to a large-scale commercial success was enabled through a similarly significant expansion of premises. Over two decades, Davis acquired 59–62 Whitechapel High Street and the patchwork of properties behind this, stretching back to Manningtree Street. The most extensive redevelopment of the site occurred in the mid-1880s when Davis employed the local architect John Hudson to design a new factory- warehouse. The three-storey block was said to be ‘magnificent…containing all the latest improvements and built throughout with a view to the health of the large number of hands now employed.’2 The mill was however prone to fires; only a few days after its re-opening in 1888, it was severely damaged. Sporadic fires afflicted the premises in subsequent years leading to semi- frequent rebuildings, yet the business continued to flourish, operating on the site until about 1960 despite suffering a direct hit during the Blitz in 1940.3

Isaac Davis died in 1913, having fulfilled his youthful ambition to become a public benefactor. At the Great Synagogue (Duke’s Place), his father and grandfather had acted as Beadle and Assistant Beadle respectively and Isaac himself was a generous supporter of many local Jewish causes including the Jews’ Hospital, Jews’ Orphan Asylum and the East London Synagogue.4 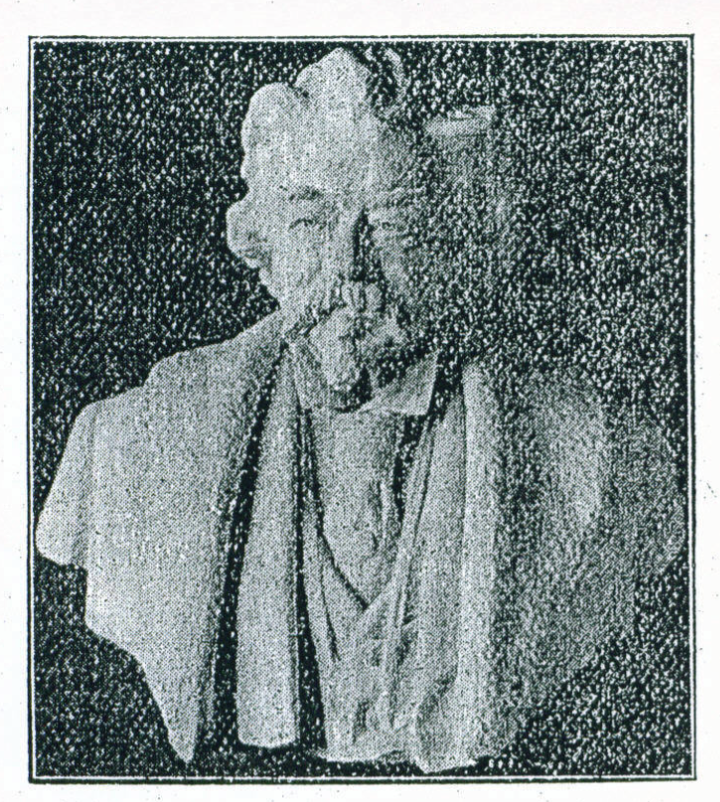 In the early 1960s, the London County Council (LCC) imposed a new traffic management plan on the area around Gardiner’s Corner. Commercial Road was diverted to create a new junction with Whitechapel High Street further east. This new road ran along the western edge of the Davis Feather Mill, precipitating its compulsory purchase and closure of the business.

Having secured a 99-year lease from the LCC, Central and District Properties Ltd funded redevelopment of the site and architects Lush & Lester were commissioned to design a large six-storey flatted factory. At this time, rag- trade warehouses, showrooms and workshops still proliferated in Whitechapel, often operating in cramped conditions, cheek-by-jowl with housing. Lush & Lester’s scheme was one of a number of local efforts on the part of the LCC to concentrate and increase accommodation standards for these and other small- scale businesses, many of which were to be displaced by wider redevelopment in Stepney Borough. Contemporary with 1-13 Adler Street, Lush and Lester’s flatted factory followed a recently revived building model which sought to provide small-scale urban industry with affordable, purpose-built units, zoned away from housing. The aim was to allow ‘one man’ enterprises to prosper.1

Lush & Lester responded to the challenge of building cheaply and sturdily with the pragmatism that was characteristic of their work; their proposal of a reinforced-concrete frame of six bays east–west and ten bays north–south was built. 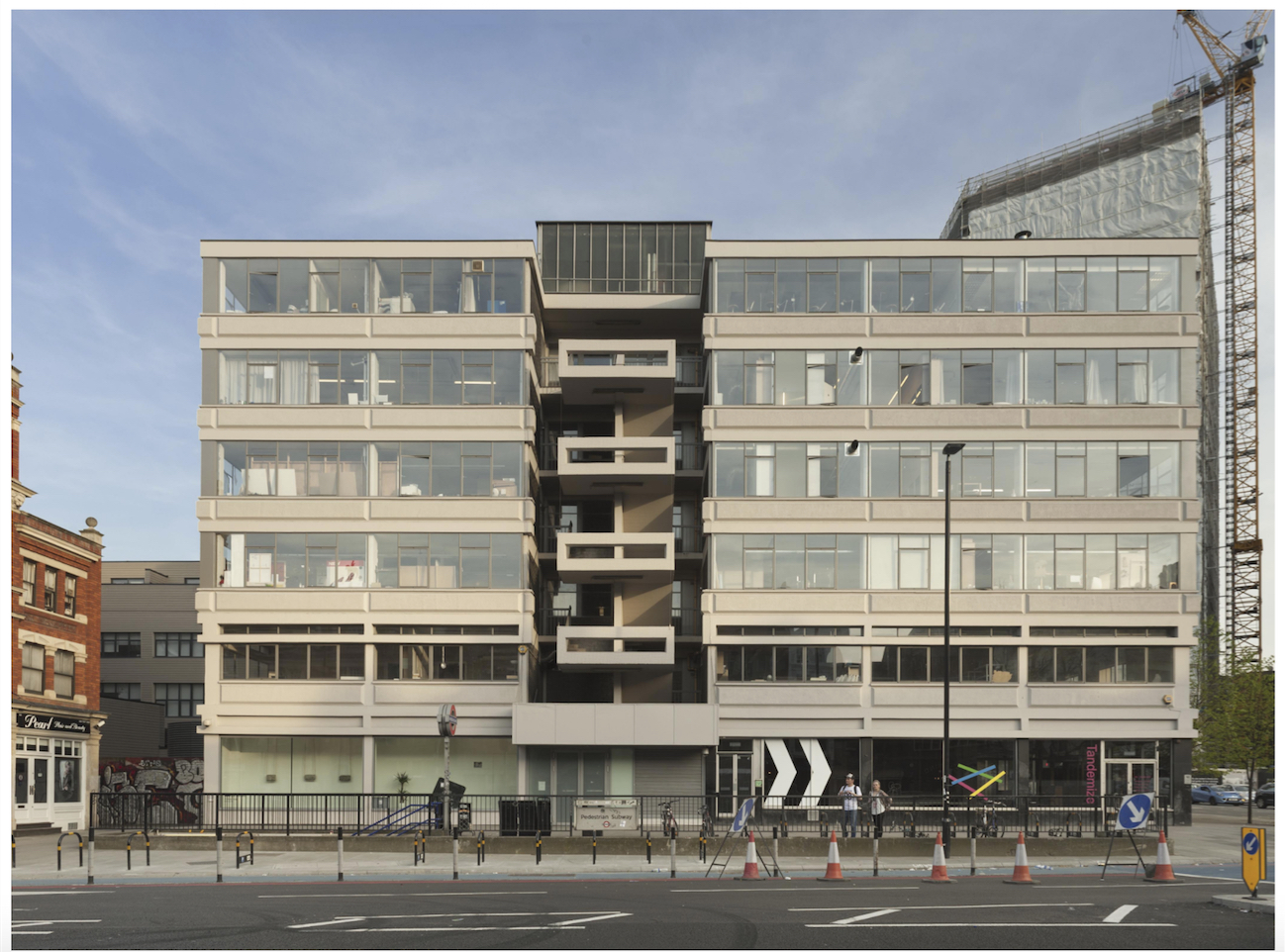 Externally, large windows wrap around all sides of the building and pre-cast exposed aggregate panels alternate with fair-faced concrete, painted light grey. On the short north and south elevations, centrally positioned external staircases recede into the core of the building then project forward beyond the building line. These distinctive gestures marked the principal entrances to the workshops located on the second to fifth floors. Seven ground-floor showrooms faced onto Whitechapel High Street and the newly diverted Commercial Road, each assigned a set of internal stairs giving access to self-contained first-floor warehouses or workshops. Running parallel to the long east elevation, a service lane branches off Manningtree Street, snaking around a circular substation towards underground parking.2

The construction of Central House began in June 1964, delayed by adjacent roadworks, and was completed in June 1965. Although the ground and first floors were immediately occupied by textile businesses, the Sir John Cass School of Art was accepted as main tenant of the rest of the building. The building was easily adapted to educational purposes courtesy of a network of modular partitions, but the logic and intention of the flatted factory was lost.3

By the mid-1980s, local textile and fashion entrepreneur Roy Sandhu was using a number of properties around Gardiner’s Corner for his business ‘Roy Manufacturing’. However, having acquired the freehold for Central House and with the rag trade on the wane, in 1986 Sandhu turned his attention to property development. He commissioned Wapping-based architect Ian Ritchie to daringly reimagine a site that stretched all the way from Commercial Road to St Mary’s Gardens (now Altab Ali Park), taking in Central House and allowing for the closure of White Church Lane. The speculative scheme tested the appetite for a new monolithic banking centre located just outside the City, presenting a potential rival to Canary Wharf.1

The proposal consisted of a semi-cylindrical office tower of sixty storeys, taller than any other tower in Europe at the time and inflected with High-Tech nuance. Dealing floors clad in translucent glass were to be punctuated by open garden levels at strategic intervals. A four-storey mixed-use podium at the base of the tower was intended as a concession to the urban context, so too was the creation of new parkland behind the tower, envisioned to extend and upgrade the facilities of St Mary’s Gardens. Sandhu’s proposal was widely reported, at least in part on account of the businessman’s rags-to-riches story and bold ambition. ‘Roy’s Corner’, as the scheme was mockingly referred to, was not well received by Tower Hamlets Council nor by local residents. Criticism focussed on the tower’s high proportion of office space, its potential impact on the rag trade, and its unprecedented scale. An unfavourable political climate, precipitated by the change from Labour-led local council to a Liberal one, ensured the controversial scheme was shelved. Despite such strength of opposition, the proposal was resurrected in 1988 with only a slight reduction in its height. To the incredulity of critics, Ritchie claimed that ‘the tower will be hardly visible from street level until you look upwards and then it will be like gazing into the 21st century.’2 The scheme failed once more but Ritchie was not mistaken with regard to the future of Aldgate.3

London Metropolitan University
Contributed by Survey of London on Jan. 2, 2018

Via a series of mergers, the vestiges of the Sir John Cass School of Art were subsumed into London Metropolitan University (LMU) in 2002. Central House had been retained throughout the School’s various iterations, used for the teaching of art, craft and design for over three decades. Additional workshops were located in a separate building on Commercial Road. In 2011 the University decided to move its architecture department from its Holloway Road premises, on which the lease was due to expire, to Central House, to create a unified ‘creative hub’ in Whitechapel. All floors of Central House were then in possession of the soon-to-be expanded Faculty of Art, Design and Architecture. The first upgrade of the building was undertaken by architects Cartwright Pickard, whose extensive re-organisation of the ground-floor and basement created new entrance, gallery, café, gym and studio spaces.1

As Director of Architecture and Dean of the Cass Faculty, Robert Mull commissioned ‘ultimate insiders’ at LMU, Florian Beigel, Philip Christou and the Architecture Research Unit (ARU), to re-conceive the upper floors of building to facilitate the teaching of architecture.2 Their scheme re- asserted the original structure of the building, but deliberately sought to disrupt its uncompromising pragmatism in order to allow for informal connections between disciplines to emerge serendipitously. After relocating to Central House in the summer of 2013, students and staff of the architecture department acknowledged the efficacy of Beigel, Christou and the ARU’s sensitive interior interventions. Moreover, the ‘Aldgate Bauhaus’ continued to benefit from its proximity to the East End art scene and the Whitechapel Gallery. Faculty-wide confidence in the future culminated in July 2015 in a proposal for a large-scale installation of external signage, designed by art Professor Bob and Roberta Smith. It was to proclaim that ‘Art Makes People Powerful’. Events that unfolded subsequently suggested otherwise.3

In October 2015, under increasing financial pressure, LMU’s senior management presented a ‘one campus, one community’ plan, anticipating the closure of nineteen courses and a much-reduced student body. Central House was designated for sale and the Cass was to be relocated to Holloway Road, its custom- designed teaching spaces discarded. The proposed closure was met with fierce opposition, perceived to be a short-sighted commercial decision, and indicative of the identity crisis afflicting many former polytechnics in the twentieth-first century. The ‘Save the Cass’ campaign drew widespread support and publicity with David Chipperfield, Richard Rogers and Nicholas Serota lending their backing. In December 2015, the sale of Central House was debated in the House of Lords, but the government declined to take action and LMU’s senior management did not lose their resolve.4

The Future
Contributed by Survey of London on Jan. 2, 2018

In February 2016, a development company, Frasers, purchased Central House from LMU for £50 million, a price the University noted was ‘significantly above the expected market level’.1 The building was formally vacated by the Cass on 31 August 2017 and is presently awaiting redevelopment. Planning for a new mixed-use tower including retail, hotel and offices of approximately thirty storeys is in its early stages. Outline designs have been prepared by Arney Fender Katsalidis. The Cass is being temporarily housed in Calcutta House awaiting relocation to Holloway Road.2 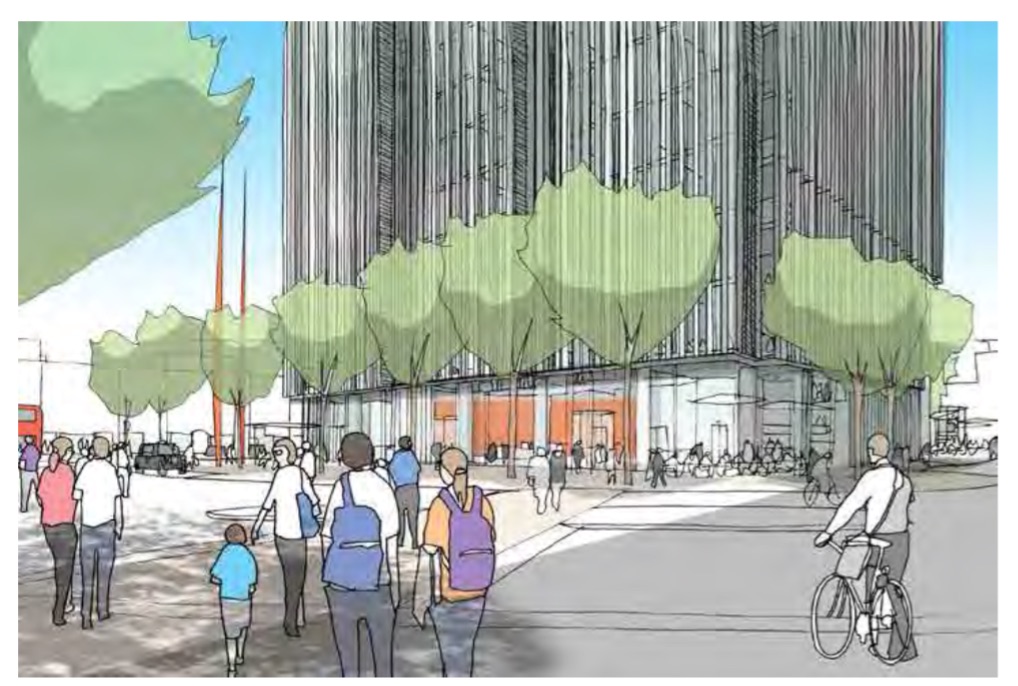 Robert Harbison, former professor of architecture at London Metropolitan University, in conversation with Sarah Milne, Survey of London (31 May 2017):

"The architecture department only moved to this location in 2012. It was on Holloway Road as long as I was teaching at the Cass. I haven't had any experience of reporting to work in Whitechapel but I have been to Central House a fair number of times. I think it worked well and it certainly was pleasant to experience as an outsider. It was converted by Florian Beigel, Philip Christou and ARU in an interesting way, but now it has been sold and is not going to function as a school anymore. So it turns out to have been an extremely short-lived but very inventive use of a sixties office building. It was a relatively cheap conversion that flaunted its ad hoc qualities, bold in the way that it thought of the spaces and used them. Spaces were often indeterminate, and flexible in their function. ARU has been an imaginative architectural practice and this example of their work deserves to be recorded as fully as possible before it disappears sometime in the summer. They made fresh and lively spaces out of unpromising material.”

Sold to property developers
Contributed by _crp_ on May 1, 2017

The building was sold to the property development company Frasers Property (UK) Ltd for £50 million in 2016. London Metropolitan University is reported to have leased building back until August 2017, but will then relocate the faculty to Holloway.

The building was originally built as a textiles warehouse in the 1960s. 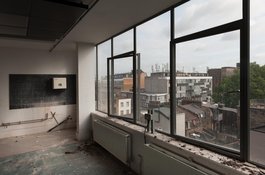 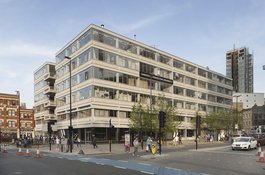 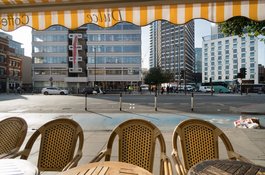 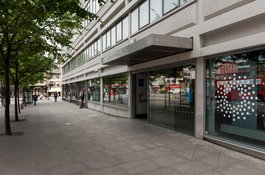 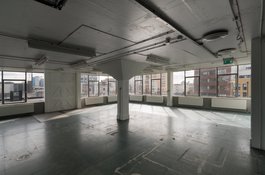 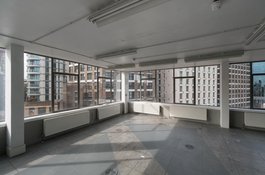 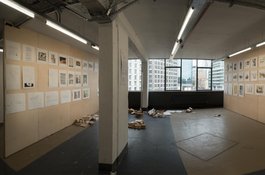 Remnants of the degree show, August 2017
Contributed by Derek Kendall 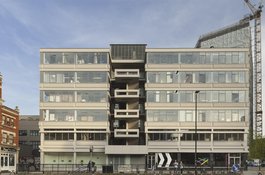 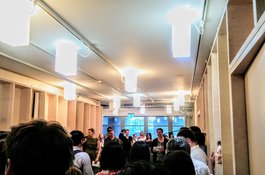