This school, built in 1870–2, stood on the north side of Chamber Street immediately east of the Haydon Square railway spur viaduct for more than a century. The Roman Catholic Oblates of Mary Immaculate had established a presence in this locality in 1850. They acquired houses at the west end of Prescot Street in 1865, behind which a temporary church, the forerunner of English Martyrs, went up in 1866. This was opened by Cardinal Manning and divided so that the Oblates, led by Father Robert Cooke, could use it to teach 400 children in shifts during the week. Education was a priority for the Oblates and Manning was concerned that the introduction of the Education Act of 1870 and the consequent building of board schools would increase godlessness among London’s children. Manning and Cooke were able to elicit funding from wealthy English Catholics to support the building of a permanent school.1

The brief for the building was ambitious, imagining a hall for young working men, an assembly place for the Total Abstinence Society, a reading room, and a parish library; it was hoped that a savings bank might be added in due course. The foundation stone was laid in June 1870 by Princess Marguerite of Orléans, a grand-daughter of King Louis Philippe. The school was designed by John Young, a Catholic architect and surveyor in the City for the Corporation of London, who affirmed that he had kept ‘within every limit of economy’. Merritt and Ashby were the builders. There were contributions from Princess Marguerite and weekly donations from 582 poor parishioners. But when the school opened in April 1872 the Oblates were ‘far far away from solvency’.

Confined to a small urban site, Tower Hill School rose up compactly in triple- decker form. Behind a seven-bay front, each of three lower levels was a single large schoolroom, with infants on the basement, then girls and boys above, alongside a lending library. The top floor was a lofty parish room, called St Patrick’s Hall, with a capacity of 500.2

The school was also used for St Catherine’s Protectory, which continued the work of an industrial and night school for working girls deemed at risk. This had been established in 1869 in a house to the east at 87 Chamber Street, recently vacated by the Oblates. A group of four Catholic women moved in to devote themselves to working for the welfare of the local poor. Led by Frances Taylor and funded by Lady Georgiana Fullerton, these women supported the Oblates’ social work, running a Sunday School as well as the school for working girls. In 1872, the group became the Poor Servants of the Mother of God, an order founded by Taylor that was modelled on the self-supporting Little Servants of the Mother of God, who lived among and served the poor in rural Poland. The Poor Servants departed to west London in pursuit of self- sufficiency before the completion of the school building, passing their teaching responsibilities to the Sisters of the Immaculate Conception, a branch of the Holy Family of Bordeaux, affiliated to the Oblates since 1858, and formally amalgamated with their male counterparts since 1870. The new school enabled expansion and thus required more Sisters to support it. No. 87 Chamber Street became inadequate as residential accommodation and the Sisters moved their convent to Prescot Street, to No. 10 in 1880, thereafter to Whitechapel County Court, and thence to No. 24.3

The school’s circulation was twice improved. The main staircase was moved to the east end in 1899–1900 as a consequence of the widened railway’s proximity to the western bay, and external balconies were added in 1939, to permit internal movement that did not disturb classes. Four houses to the east (Nos 62–65) were cleared in 1935 to form a playground. In 1970, exactly a century after the foundation stone had been laid on Chamber Street, the school moved to more spacious new buildings in St Mark Street as English Martyrs’ School. The Chamber Street school building was refashioned to be a community centre and club, then demolished in 1985.4

All but the west end of the site of Tower Hill Roman Catholic School and its playground was redeveloped by the Oblates in 1985–7 as the plain brick-faced five-storey back part of Juno Court, an office block at 24 Prescot Street that has been a hotel since 2005. As part of the same project, for all of which Hamilton Associates were the architects, a small four-storey community centre, English Martyrs’ Club, followed to the west on Chamber Street in the late 1980s, reintroducing some of the postmodern fidgetiness that characterises the Prescot Street façade, though here in brick. The centre was converted to residential use in 2011–12 to be a retreat for visiting Catholics and renamed De Mazenod House in honour of Eugène de Mazenod, the founder of the Missionary Oblates of Mary Immaculate.1

A decade of change around Chamber Street
Contributed by Survey of London on March 27, 2018

Oliver Barry in conversation with Sarah Milne on 23 March 2018:

"I've been aware of Whitechapel for quite a number of years as a venue or a place for our ministry as a congregation. That goes back into the 1850s. I came here in 2011, with the idea of re-starting this house on Chamber Street as a retreat and spirituality centre, a Catholic retreat centre attached to the church on Prescot Street. I worked on the refurbishment of this building and then our aim was to be ready for the Olympics in 2012. We were just about ready [in time]! So we had a few little connecting points with the Olympics, just taking people in, an example would be a man who was working as a massage therapist for the athletes stayed with us, someone who was a chaplain stayed with us…that sort of thing. So then from 2012 it was just developing this centre as a retreat centre and being involved in the church on Prescot Street as part of the team there.

We're part of a religious congregation that is called the Oblates of Mary Immaculate. That goes back to the 1820s in terms of its foundation, but in relation to here, [it goes back to] the 1840s, so I had an awareness…of the place that Tower Hill has had in the history of our congregation over that period of time [prior to my arrival in 2011]. I personally have been aware of [the Whitechapel ministry] since the day I joined the congregation, but because it had gone through a period of decline, and there was a possibility of everything closing down really, because the area was a bit of a derelict area and nothing happened at weekends because it was the fringe of the City. So it was busy during the week but then people moved away and there was very little residential accommodation. It was a deserted zone. This was pre-2000s. As you come into the 2000s it began to rejuvenate, that's my sense of it anyway. When you look at some of the photographs of the street in the pre- 2000s, where the Grange Hotel is, that was just an old bombsite. [Since then] big developments…have gone on along Leman Street and the other things…are going on now…like the Royal College of Psychiatrists.

When my colleague came here, which was nine years ago, one of the things that he constantly reminds us of was that there were no shops. We have Tescos and Sainsburys now, but for him to do any shopping, he had to go down as far as Monument. There was a little cornershop over the back of Tenter Street, but it was only a little...you couldn't do your shopping on it. That was nine years ago. It's changed dramatically. It's changing before our eyes really. And this street is changing even though it's a back street. Over the next few years it will change phenomenally, with the development on Royal Mint Street, which will open up onto this street through the arches. Then there is another predicted for a site maybe a hundred yards up the road here, at the back of the College of Psychiatrists. The planning permission was for apartments. It will probably have offices on the ground floor and apartments above." 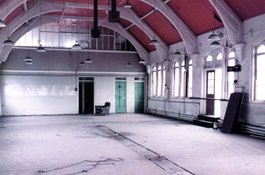 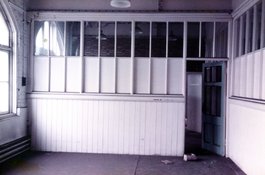 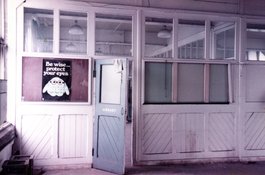 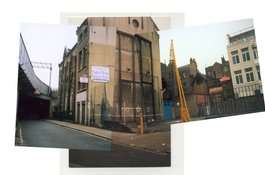 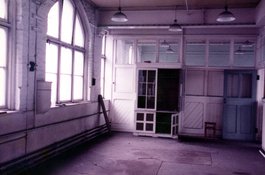 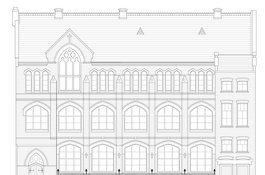