Sterling Mansions
Back to Map

In 1908–10 the Co-operative Wholesale Society's branch headquarters at 99 Leman Street were extended northwards by F. E. L. Harris for a new drapery showroom. Francis Eldred Lodge Harris, ARIBA (1864–1924), was appointed in September 1896 as the Co-operative Wholesale Society’s first architect, with a new department under his charge at the Manchester headquarters, from where he supervised the designs of all new CWS buildings and extensions at home and abroad.1 He was born and educated in Bristol and served his articles in the city with the large building firm of W. H. Cowlin and Son before setting up in practice in Chelmsford, Essex, in 1889.2 .He appears to have been working for the London Branch from at least June 1898, when ‘our architect, Mr Harris’, was consulted on the rebuilding of 93 Chamber Street, which formed the rear part of the premises recently converted for bacon stoves on the opposite side of the road at 118 Leman Street.3 In addition to his work in Whitechapel, Harris’s other CWS buildings in London included flour mills (1900), grocery works (1904), soap works (1908) and grain silos (1910), all at Silvertown, to the south of the Royal Victoria Dock;4 the silos employed the Hennebique system of reinforced concrete construction and Harris was probably the first English architect to employ reinforced concrete on a large scale.5 He retained his post as CWS architect at the Manchester headquarters until his death in 1924 but does not appear to have worked in Whitechapel after about 1910.

The new drapery showroom at what was then 75–97 Leman Street was comprised of four warehouses and replaced twelve four- and three-storey houses that had occupied the space between the London Branch Headquarters and a wool warehouse.6 These had been built on the western half of the piece of land owned by Mr Lawrence in 1814 and by 1849 No. 97 Leman Street belonged to G. W. Mayhew, who also owned property at Hooper Square that the CWS would acquire in the early twentieth century.7 By 1901 the houses were mostly in multiple occupation, many of their tenants working in tailoring and related trades, and within a few years, 87–91 and 97 Leman Street were empty and had already been bought by the CWS, leaving only Nos 93 and 95 to be acquired.8

Harris’s first application on behalf of the CWS in 1907 for a new building on this site was refused on the grounds that it exceeded eighty feet in height and he was invited to inspect the relevant factory and building acts regarding fire escapes.9 The revised design was for a six-storey building in concrete and steel, presumably with alterations to the escapes; this echoes Goodey’s original building in proportions and materials but is somewhat more solid in appearance. The combined frontage of 75–99 Leman Street was now more than doubled in length and extended to 333 feet. When it opened in 1910, the new wing contained the drapery, millinery, lingerie, haberdashery and related departments. At the top was a telephone exchange, which connected London with the branches in Northampton, Bristol, Cardiff, Manchester, Newcastle and the productive works throughout the country.10 Very soon, journalist and official CWS historian, Percy Redfern, would describe the enlarged premises as ‘walling in’ Leman Street on both sides and, by 1922, the offices and warehouses locally were said to be ‘like old and permanently fixed enterprises … the huge expressions of Co-operation’.11

Social, political and cultural activity in the Co-operative Wholesale Society's premises in and around Leman Street
Contributed by Rebecca Preston on March 29, 2019

From its early days the Co-operative Wholesale Society organised social and educational activities for its staff and hosted meetings and other events, and later on leased property to co-operative and other organisations with whom it shared interests and values. At the suggestion of Mrs Benjamin Jones, wife of the London Branch manager, the first meeting of the Women’s Co-operative Guild took place at Hooper Square on 15 April 1886, attended by over seventy women and chaired by co-operative worker Catherine Webb.1 Representatives from Toynbee Hall had been present at the opening of the new headquarters building in 1887 and from at least 1885 the settlement had put on lectures for CWS workers at Hooper Square and also held classes for co-operators at Toynbee Hall.2 A library for employees was formed at the London Branch, not long after the fire had destroyed the premises in late 1885, when board meetings were transferred temporarily to Toynbee Hall.3 When Prof Sedley Taylor started a class in economics at Toynbee Hall, CWS staff were said to have formed the nucleus of his students.4 The Wholesale considered itself a beacon in the East End, its architectural presence drawing attention to its work in the promotion of co-operation, and provided office space for kindred organisations. Thus in the late 1880s and 1890s, 99 Leman Street was the address of the Co-operative Aid Association, the Tenant Co-operators Society, and the People’s Co-operative Society. No. 99 Leman Street also hosted public lectures on co-operative and related themes. A course of twenty university extension lectures was offered on the life and duties of the citizen on Saturday afternoons in 1893, held after the working week had finished at 4 o’clock on Saturdays in the Conference Hall. These were free to co-operators and 5s (or 2s 6d for the half course of ten) to the general public.5 In 1901, the Countess of Warwick presided at a conference at London Branch headquarters on London School Board Evening Continuation Classes.6

During the Co-operative Wholesale ‘tea girls’ strike’ over piecework at the tea department in 1904, Canon Barnett offered the women a room at Toynbee Hall while he opened negotiations between the CWS and the Women’s Trade Union League.7 In the 1930s, Toynbee Hall organised for parties of undergraduates and public school children to be taken around CWS premises locally.8 By the 1920s, in addition to the various departments and bank, 99 Leman Street was also home to the CWS Financial Propaganda Department, CWS Social Club, the Co- operative Press Agency and the Russo-British Co-operative Information Bureau.9 London Branch employees’ activities on site included a fine art club, with ‘notable exhibits of painting and sculpture from Leman Street’ being shown in the 1930s at the East End Academy in the Whitechapel Art Gallery.10 An Ethiopian Exhibition organised by Sylvia Pankhurst on behalf of the Princess Tsahai Memorial Hospital Fund, of which Pankhurst was the honorary secretary, was displayed during 1948 in the Boot and Shoe Showrooms at 99 Leman Street. Ancient Ethiopian traditional dress, embroidery, leather- work and illuminated books appeared alongside examples of modern textiles. This formed part of a project to form closer relations with ‘the brave Ethiopian people whose struggle against the aggression of Mussolini aroused sympathy and interest in this country’. A film, ‘This is Ethiopia’, was shown in the CWS film theatre at the Tea Office across the road in Prescot Street.11

The Co-operative Wholesale Society around Leman Street and its beginnings in London
Contributed by Rebecca Preston on March 29, 2019

The Co-operative Wholesale Society (CWS) opened its first warehouse in Whitechapel in 1881, on a plot on the north side of the present Hooper Street, just to the east of Leman Street. Very quickly, as CWS business expanded, the organisation bought up and built on neighbouring plots and by the 1930s this corner of Whitechapel was home to a series of impressive warehouses, offices, factories, showrooms and a bank, which flanked Leman Street and surrounding roads. Designed by CWS architects and engineers, many of the buildings in what became a Co-operative Wholesale colony have now gone and what remains has mostly been converted to apartments. Of the original warehouse built in 1879–1881, only the stair tower survives, a yellow-brick column to the rear of the CWS London Branch headquarters building at 99 Leman Street, which opened in 1887. That and some of its CWS successors still dominate the vicinity, not without a degree of architectural spectacle.

The Co-operative Wholesale Society – now The Co-operative Group – was founded in Manchester in 1863, to supply basic foodstuffs and daily necessities wholesale to Co-operative retailers. The wholesale society was a federal organisation, owned by the retail societies it traded with, and sought to integrate production and distribution in order to lower costs. As is well known, the co-operative principle of mutual benefit was established in 1844 by the Rochdale Equitable Pioneers’ Society, many of whose members had backgrounds in earlier co-operative, communitarian and socialist ventures.1 From around the mid-century, efforts were made to set up a central wholesale agency, culminating in what became the CWS.2 It began as the North of England Co-operative & Wholesale Industrial Society Ltd and expanded rapidly to serve the growing number of retail societies in England and Wales. When it became impossible to serve these from Manchester alone, subsidiary wholesale branches were set up in Newcastle-upon-Tyne in 1871 and in London in 1874. 3 London was considered difficult terrain, a ‘co-operative desert’ in need of irrigation and the story of the struggle to gain a foothold in the capital was characterised in 1913 as ‘the attack on London’.4

The CWS aimed to procure unadulterated goods at low prices, by ‘eliminating the middle-man and his profits’ rather than economising on labour.5 Beginning with butter, which accounted for a third of sales in the first decade, the CWS built a network of buyers, suppliers and, crucially, depots, which facilitated bulk purchasing and centralised processing in order to secure the best prices and quality.6 The co-operative principle of avoiding middlemen also underlay the Society’s policy in London of, wherever possible, purchasing the freeholds of its premises, ‘for co-operators, being prudent men, have a righteous horror of the short leasehold system’.7 Thus the CWS and a little later the English & Scottish Joint CWS (E&SCWS) became significant landowners in Whitechapel.

The first London Branch premises opened in 1874 at 118 Minories, a warehouse backing onto America Square on the eastern edge of the City of London. This was convenient for the docks and for markets, in particular Mincing Lane in the City, which was the centre of the international tea trade from the 1830s. The London Public Tea Auction, held in the London Commercial Sale Rooms at Mincing Lane, was established in 1834 after the dismantling of the East India Company monopoly.8 Tea fit with the temperance beliefs of many early co- operators and from the foundation of the Wholesale Society formed an important CWS commodity; it remained so as consumption of tea increased nationally, only levelling off in the 1940s.9 Within a few years of opening in London the business had outgrown the space available and the CWS began to look for larger premises. ‘Great difficulty was found in selecting a freehold site which would be at once convenient for the various markets and the railways’ but by the end of the 1870s a site in Whitechapel had been decided upon and in 1881 new London Branch premises were opened near Leman Street, less than half a mile east of the Minories.10 As the Society consistently pointed out to its members, Leman Street was both the highway to the docks and ‘conveniently adjacent’ to bonded tea warehouses.11 The premises were also keenly positioned within the railway network and bordered on the site of the future London, Tilbury & Southend Railway (Commercial Road) goods depot and its vast warehouses, which, when it opened in 1886, provided a link to the East & West India Dock Company’s new dock at Tilbury.12 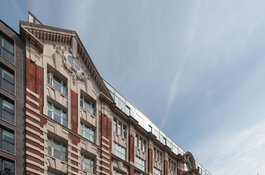 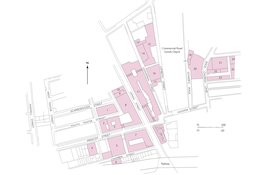 Visit by the Prince of Wales to CWS Leman Street, 1924

Silent Pathé newsreel showing a visit on 3 March 1924 by the then-Prince of Wales, later Edward VIII, to the headquarters of the Co-operative Wholesale Society in Leman Street. There is a long shot looking north up Leman Street, bedecked with bunting, with Sterling Mansions (then part of the CWS) on the right. After the Prince, the Prime Minister, Ramsay MacDonald and Leader of the Opposition, Stanley Baldwin (who succeeded MacDonald as primte minister later that year), arrive. The guests go into the CWS on the west side of Leman Street, on the site of 100 Leman Street.