100-136 Cavell Street
Back to MapContribute

In the eighteenth century this site was part of a bowling green on the south side of the hamlet of Mile End Green. The road that is now Cavell Street was extended south of present-day Raven Row in the first years of the nineteenth century when, confusingly, it was called Raven Row, later Raven Street. Building leases were granted from 1812 and by 1813 a handful of houses stood on its east side. A continuous run of twenty-three down to Oxford Street (now Stepney Way) was complete by 1827. Further west East Mount Street had also been extended southwards by this time, but infill of the intervening block with terraces on Cotton (now Milward) Street was not seen through until around 1854. Twenty years later, when the East London Railway scythed through the block between Raven Street and Cotton Street in open cutting, there was a mission hall behind two houses on the east side of Raven Street, which became Bedford Street in 1894 (and Cavell Street in 1938). The area’s population was predominantly Jewish by the turn of the century.1

The building that is now 100–136 Cavell Street was erected in 1915–16 to be a clothing factory for Michael Schneiders of S. Schneiders & Son, hat and cap manufacturers, whose principal works had been nearby on the north side of Durward Street since 1881. Hobden & Porri were the architects, Bovis Ltd the builders. A first contract was cancelled in August 1914 on the outbreak of war, but the plans were quickly revived to enable the manufacture of army clothing. Schneiders benefitted greatly from contracts for military clothes and caps through the First World War. The long, brick-clad, two-storey and basement, steel-framed building has maximum fenestration to the street; its upper workshops were also top-lit. In 1922 178 men and 431 women worked here. Schneiders departed in the late 1950s and the building continued as a ladies’ coats factory under Julius & Co. Ltd from 1959, with 132 men and 115 women employed on the site in 1965. Asil Nadir’s Wearwell Ltd of 101 Commercial Road followed from 1981, around which time the houses to the west were cleared.2

By 1988 the Cavell Street factory had passed to Flick Fashions Ltd, of 131–139 Commercial Road. In 1989–90 it was converted to form twenty units for light- industrial, office or shop use, the works overseen by Associated Consulting Engineers Ltd (Gulzar Ahmed, Director) and carried out by Whitgift Construction Ltd. Among first tenants was Dahabshiil, pioneering Somali remittance brokers, who opened their first UK office here at 118 Cavell Street. Educational use accumulated and by 2015 tenants included the British Association for Early Childhood Education, the Muslim Council of Britain, Ayasofia (Islamic) Primary School, London Citizens Tower Tuition and London Churchill College. Replacement by a 23-storey tower was briefly mooted in 2005, then in 2016 the KTS Group Ltd, headed by Tahir Sharif and Shahid Sharif of a family with roots in Flick Fashions Ltd, put forward a scheme designed by Sheppard Robson, architects, for two large mixed-use blocks, largely housing, the tallest at twenty-four storeys. This was amended down to seventeen storeys in late 2017.3

This undated slide, from the Tower Hamlets Archives Collection, is looking north past what was then the premises of S. Schneiders & Son, makers of suits and jackets, towards the Methodist Mission, built 1969-71 on the corner of Raven Row. This, along with the style of the parked cars, suggests the photograph was taken in the late 1970s. 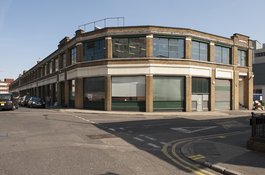 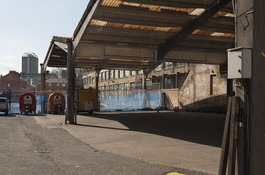 100-136 Cavell Street, view of covered yard at the rear in 2016
Contributed by Derek Kendall