The imposing early-Victorian brick range that stands askew behind Commercial Road east of White Church Lane was built by John A. Furze in 1846–7 as St George’s Brewery. Furze had been based on Old Castle Street in partnership with Charles Marshall in the 1830s at a brewery founded there in 1823 by Joseph Ticknell. His surveyor–architect for the new brewery was Charles Humphreys. The building was aligned square to White Church Lane and faced a yard to its south that was obliterated when Commercial Road was extended in 1869–70. This was a model brewery, featured in the Illustrated London News where it was praised for its quiet efficiency.

It was given an internal frame of cast iron, ornamentally detailed columns interlocking with T-section girders and lower-level brick jack arches, to carry great weights and conduct heat. The building was divided into three unequal sections by brick cross-walls, for brewing to the east and cooling and fermenting to the west, separated by malt and hop stores in the bay between. This division was and is articulated externally, with a dentilled cornice to the west, a finely detailed guilloche Portland stone string course and a stepped gable to the dividing bay, and chamfered yellow-brick quoining to the three eastern brewing bays, above which there was a huge iron water tank. A separate steam-engine house stood beyond to the east. In the early 1850s the brewery was extended westwards to take in the Fir Tree Public House on Church Lane, but that gain was soon taken away by the extension of Commercial Road. Through the Victorian period Furze & Co. prospered as one of East London’s major purveyors of beer.1

Walter Furze sold up to Taylor Walker & Co., Limehouse brewers, in 1900–1. They maintained St George’s beer house facing Commercial Road, but closed the brewery and sold the freehold to John Walker & Sons Ltd of Kilmarnock (Johnnie Walker) for use as bonded whisky stores and a bottling plant. This soon came to be known as St George’s Bond. The main building was converted to house a distillery on the ground and first floors, with storage, bottling, labelling and packing above under a new roof with steel girders inserted at upper levels. There were also alterations to two bays of the west section for a lower mezzanine level, now removed. A row of houses on the south side of Assam Street was pulled down around 1910 and that site redeveloped for a bonded bottling warehouse. This may have been begun in 1913 via Davis & Emanuel, architects, but it appears not to have been completed until 1919–20 when Walter Laurence & Son Ltd were the builders. Numerous further alterations included adaptation of part of the main building as an air-raid shelter in 1939.2

Johnnie Walker continued here as part of Distillers Company until the early 1970s when the Amalgamated Investment and Property Company acquired the site and planned its redevelopment for offices. Their scheme fell foul of the spot- listing of the 1840s range and rag-trade use followed.3 For a time the building was squatted. Graffiti of the last years before adaptive reconstruction included figures by Stik in the reveal of an arch in the old brewery’s east wall at ground-floor level that have been retained.

Development proposals in 2006 mooted a 35-storey tower. This was refused and plans for Broadstone Ltd working with Burland TM Architects were revised to gain permissions in 2010. The project, largely student housing in 346 rooms, was seen through as Assam Place in 2012–14 for ADPL (Alternative Developments) and Mace with HKR Architects. A zinc- and brick-clad 18-storey tower, this height permitted as part of an ‘emerging cluster’, was inserted to the north- east where there had been bottle-storage and garage buildings. The listed 1840s range was adapted for office and other use, with western parts at lower levels open to view in a bar called The Warehouse. The Assam Street warehouse became student rooms. Single-storey retail and office spaces on the Commercial Road flank a student entrance, early twentieth-century facades retained. There are simple bare timber-panel facings to inserted staircases and partitions. The developers had indicated that London Metropolitan University students were in mind, but the complex was in due course taken by the HULT International Business School to be an undergraduate campus. The buildings are also now known as Hult Tower and The Studios, intervening space as Education Square.4 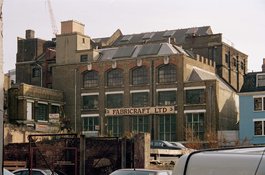 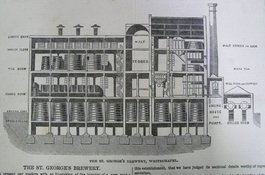 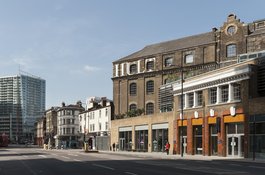 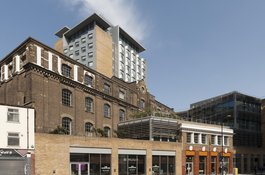 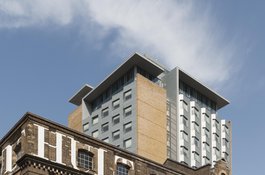 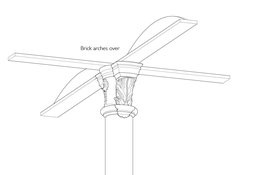 St George's Brewery, details of structural iron of 1846-7 at basement and ground-floor levels (measured and drawn, Helen Jones)
Contributed by Survey of London 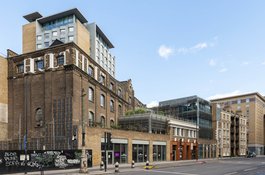