Whitechapel Fire Station
Back to Map

Whitechapel Fire Station
Contributed by Survey of London on June 22, 2016

Built in 1929–32, Whitechapel Fire Station is a rarity as an inter-war London County Council fire station still serving its original purpose. Its origins are earlier.

In the extension of Commercial Road westwards through Whitechapel the Metropolitan Board of Works held on to the triangular site that had been formed from clearance of the south side of the east end of Colchester Street. In late 1872 it decided to build here to replace humble fire stations on Church Lane and in Wellclose Square with a ‘chief’ facility. The site’s first fire station was built in 1874–5 with George Vulliamy as architect, Thomas Stimpson & Co. as builder. It was a lively four-storey building that made the most of its western corner with a rounded turret. The watch-room was at its base, with the engine room opening onto the new road. Beyond there was a large open yard with stables at the back. A superintendent was accommodated on the first floor; above there were rooms for twelve firemen (six married and six single) and a coachman. The station had four horses and three fire engines. As was general, the size of the engine-room doors became a problem. A new engine house, probably designed by Robert Pearsall, was built on the yard in 1899–1900, B. E. Nightingale its builder. Adaptation for the replacement of horses with motor-driven appliances in 1911 included repaving the new appliance room. 1 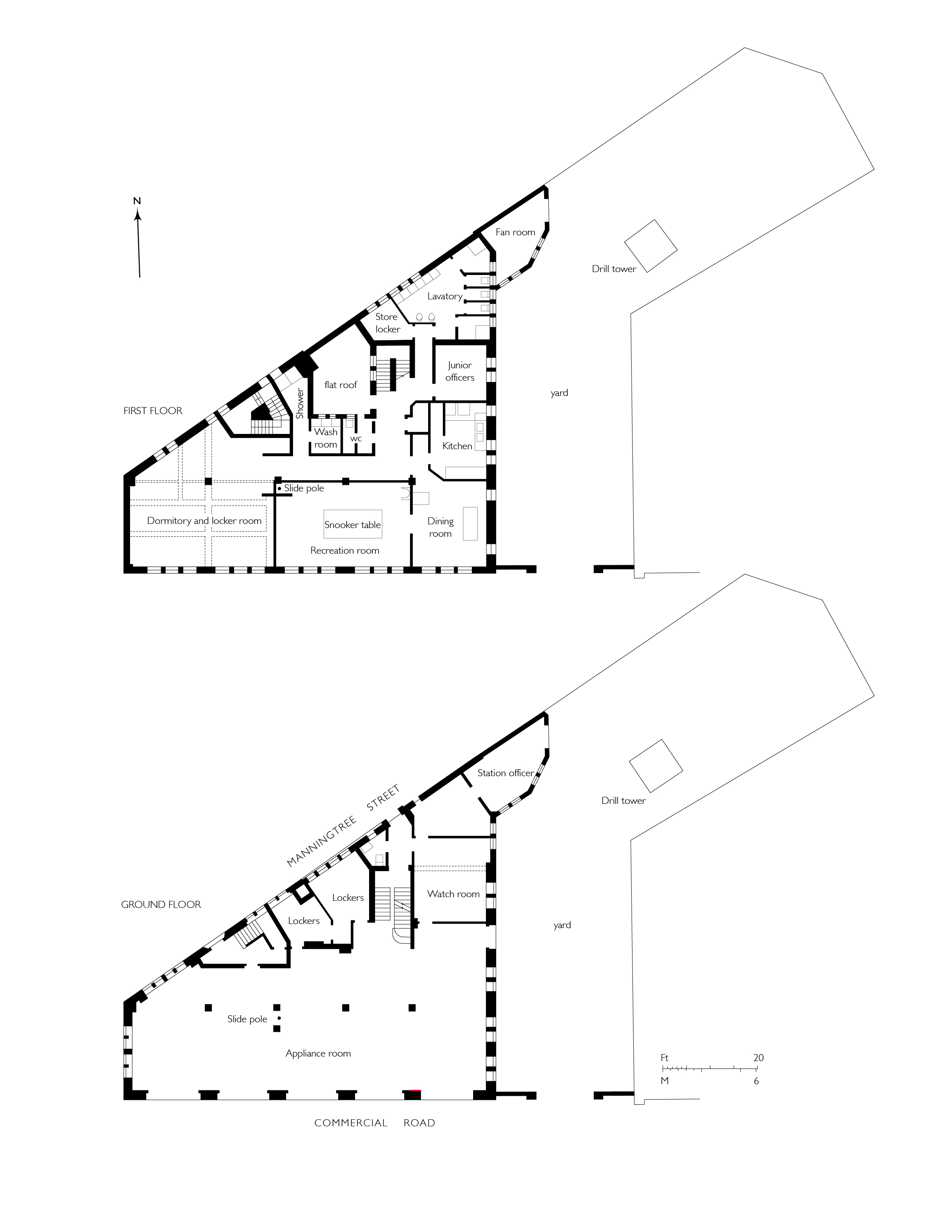 Whitechapel Fire Station, ground- and first-floor plans as in 1975 (drawing by Helen Jones)

With two appliance rooms separated by a too-small yard this was an unwieldy complex. The LCC decided to replace it in 1928 when G. Topham Forrest was in charge of the Council’s architects. L. H. & R. Roberts of Clapton were the builders. Rational in its layout, five appliance bays open onto Commercial Road under two storeys of accommodation; again a yard lies to the east. Faced in brown Stourbridge brick, this building is remarkably austere, simplicity that antedates economic hard times and is almost expressionist in the subtlety of its detailing, with chamfered brick courses and arrises, for an architecture close to that produced by Gilbert Mackenzie Trench for the Metropolitan Police in 1928–30 at Charles Rowan House in Finsbury, both anticipating similar work by Giles Gilbert Scott. Bondings, mitres and rubbings were carefully specified. The yard was enlarged up to White Church Lane. In 1938–9 in the build-up to war 351 auxiliary firemen were based at the station for training and accommodated in nearby properties, and steel joists went into ceilings as air-raid protection. A post-war relocation as part of the Gardiner’s Corner project failed to materialize. Instead internal spaces were adapted in 1979, converting flats for a modernised watch-room. Further upper-storey accommodation was given up in the 1990s and the appliance bay doors were replaced in 2000. 2 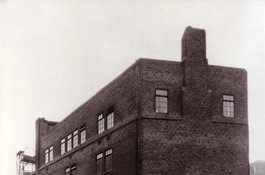 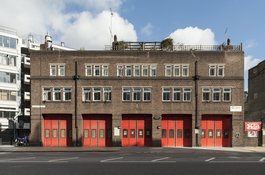 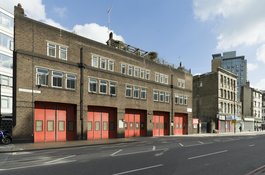 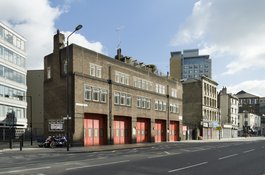 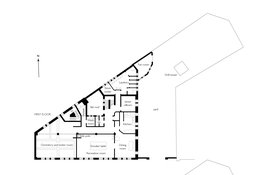 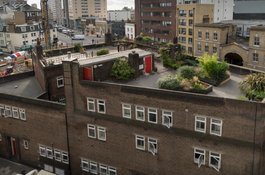 Whitechapel Fire Station, view across the roof from the north in 2017
Contributed by Derek Kendall 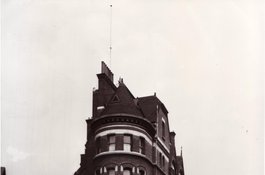